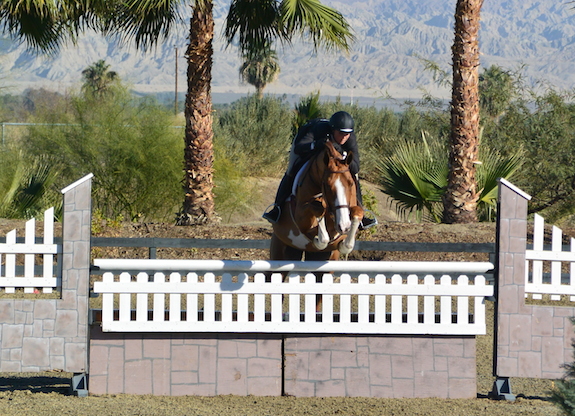 From the February 2014 Issue of The Plaid Horse Magazine:

[Thermal, California] Coming to Thermal as a young professional can be pretty intimidating. In the hunter rings, beautiful and effective riding dominate the jogs and many familiar faces like John French, Jenny Karazississ, Nick Haness, and Hope Glynn win class after class after class. For 22-year-old Marisa Metzger, her time to be in the spotlight with them is just beginning, as she takes both riding and training accolades at HITS Thermal this year.

During Week I, Metzger realized how she stacked up with several top jogs, including a win the Green Conformation Handy Hunter. She said, “I haven’t had much experience showing against them, so I didn’t come down her with any expectations. After Week I, I won a class in the Green Conformations and was 8th in the Derby and it got me thinking I could be up there with them. This week I wanted to be good and it ended up being pretty special.” As the Assistant Trainer at Sue Lightner’s Lightacres in Modesto, California, Metzger has been building her hunter resume for the past couple years, racking up Derby wins in Northern California. In May 2013, with added handy bonus points, she earned a perfect 100 in the National Hunter Derby at the Golden State Horse Show with Bailey Campbell’s Mallisko.
She continued her winning season during World Champion Hunter Rider (WCHR) Week, when Metzger earned the Green Conformation Championship with Diana Rose. Metzger has been training with Lightner for four years, since she turned professional at age 18. In addition to breeding and training at Lightacres, Lightner is also a USEF R judge and well-known for her ability to start young horses on their way to successful careers.

Metzger appreciates the depth of education she gets at Lightacres. She said, “Sue is amazing. She knows so much about so much. There are not that many people in this sport that know everything about groundwork, young horses, and can still teach you how to win in this company. There are so many people who don’t have all of those aspects. In terms of learning, I haven’t learned more from anyone else.”

Metzger started her riding career eventing in Southern California, which she competed in until age 14. She was third in the nation in training level and won Area VI on her own horse, but the move up to the FEI level was too worrisome for her parents.

From there, Metzger moved to the equitation ring and started training with Leslie Steele, with whom she showed in the Children’s Hunters on a young Thoroughbred and moved from the 3’ to the 3’6’’ equitation medals. From there, Metzger trained with Joe Thorpe and Keri Kampsen at Sovereign Place for a year.
Metzger became a working student for her final junior year with Jim Hagman at Elvenstar. Without a horse at this point, Metzger began catch riding and also grooming all over the country, including USEF Pony Finals and for Missy Clark at Lake Placid. Marisa Metzger with Alivia Hart and Madeline- winners of the Pony Hunter Classic at HITS Thermal 2014.

After starting college at Unviersity of California, Merced, without planning to ride at all, Metzger missed riding and started riding with Lightner almost immediately. While attending school part-time and working for Lightner part-time, she decided that she needed to make an informed decision about her future.

Metzger explained, “Everyone told me that I couldn’t really decide if I wanted to do it unless I did it full-time because it is not the same amount of work and not the same level of commitment. I took a year off to see and I never went back to school.”

Metzger has spent almost all of her time in the last four years riding, teaching, and going to horse shows. Outside the barn she plays the occasional game of tennis, a love she inherited from her mother, a pro-tennis player. However, she is kept busy between the young horses, sale horses, and clients’ horses, which provide her steady mix of rides she knows she will have for a while and ones that might sell at any point.

She enjoys her time spent with the young horses, saying, “The young ones teach you a lot about riding the older ones, which is fun. As we have gotten along, I have progressed with young horse training as well. The first year I was there, I started some of the three year olds over jumps, but didn’t do much with the two year olds and now I start them all and go from two years old all the way up.”

She is enjoying the path to bigger and bigger hunter derbies that Mallisko, a flashy chestnut with a white belly spot and outrageous jump, has been laying down for her. “We got Mallisko two and a half years ago for his owner Bailey Campbell’s father, who does ride him. He has been one of the best things to happen to me. He jumped in the Junior Hunters and now the Amateur Owner Hunters with his owner and the High Performance with me. The Derbies are my goal- I really want to be able to go to Kentucky one year and he’s really been able to get me into that ring, which has been pretty amazing. I can count on him- I always know that he’s going to be good, which is nice.” Alivia Hart and Madeline- Winners of the $500 Pony Hunter Classic at HITS Thermal. Sue Lightner and Marisa Metzger prepare Alivia Hart to head into the ring on Raggedy Music at HITS Thermal 2014.

The Gift of Partnership

Mothering a Horse-Crazy Child: When Things Start Getting Serious