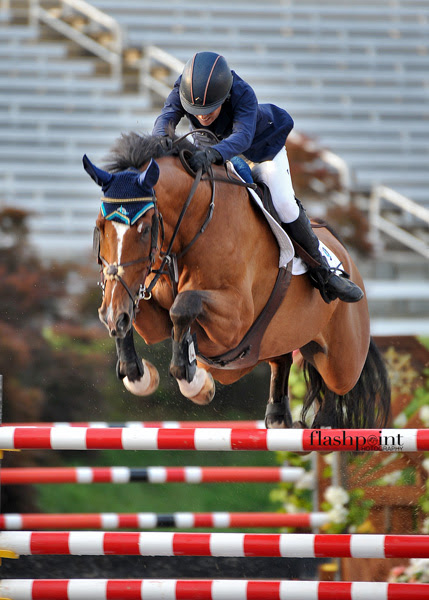 Gemma Paternoster rides Figarro D in his first Grand Prix to the win!

The $35,000 Antares Sellier Grand Prix saw 29 horse and rider teams take to the challenges posed by Stephens, but it was Gemma Paternoster of Wellington, Florida who took the win in the irons of Figarro D, owned by Julia Harrison-Lee.

Although Paternoster currently resides in Wellington, she is one of Great Britain’s top international show jumpers.  She is the Young Rider European Champion (2006) and was victorious in 2010 as part of the British Nations Cup Team on her horse Osiris in Linz, Austria. Gemma competes for Great Britain in team and individual events.

Only three went clean in the first round which had a time allowed of 87 seconds.  Derek Petersen of Legacy Farms in Archer, Florida was the fourth to go and the first to go clean aboard Maddie Skimming’s Cassevel in a first round time of 85.871 seconds.  Sixteen trips later Jordan Coyne of New Port Ritchey, Florida would go clean in the irons of her own Lazaro, and give the crowd a jump off when they turned in a clear first round effort in a time of 84.825 seconds.  But Paternoster, just two trips after Coyne, would join them in the jump off with the nine year old Belgium Warmblood, Figarro D when the pair went clean in a time of 84.126 seconds.

“Steve [Stephens] is a brilliant course designer.  There was nothing unfair in that course.  The course needed an experienced rider and a fit horse,” commented Paternoster, “He built it big and asked a lot of questions of the riders,” she said.  “He had three combinations.  Steve tested us early with the first one- it was a tall vertical coming in and you needed a very careful horse.  The oxer going out was big and floaty,” she said.

“The combination using fences 4, 5 and 6 had the first oxer narrow and square then it was followed with a wide oxer where a lot caught that back rail.  You needed to be very committed to send the horse across the extra width,” she commented.  The first and second combination Stephens designed would claim rails for half the class.

“The last five jumps were way up in the 1.50 meter territory and between the height of the jumps and the length of the course in that huge ring, you needed a very fit horse to finish that round clean,” said Paternoster.

Derek Petersen was first to go in the jump off with Skimming’s Cassevel and although they beat the time allowed of 55 seconds, had rails at the combination resulting in eight jump faults.  Coyne was next to go with her own Lazaro and although they posted a time of 44.172 seconds, rails at the combination cost them eight jump faults too.  Figarro D and Paternoster went in the enviable last to go position.  Although the pair had a rail down in the combination, their time of 51.243 seconds and four jump faults would give them the win.   The win would be the first grand prix win for Figarro D! Classic Company President Bob Bell presented Figarro D, ridden by Gemma Paternoster, with the champion ribbon and cooler after their win in the $35,000 Antares Sellier Grand Prix at the Atlanta Summer Classic.

“I found this horse through a friend of mine as a 4 year old in Holland.  He was very green with a difficult character, but a talented difficult character,” she laughed.  “He felt like an Olympic horse,” she said confidently.  “I was forced to sell him and my friend Belinda Inwood, stepped up and bought him for her son James. They showed him a bit up to the 1.20 level and had him for three years,” she said.  They called Paternoster last September and asked if she wanted the horse back since James decided to start traveling.   After three weeks competing in Portugal, Julia Harrison-Lee and Belinda Inwood made an arrangement for Julia to secure the horse and have Gemma ride him since all three saw the Grand Prix potential in the horse.   “I took him to Wellington and started at 1.30 meters and finished at 1.45, then we went off to Kentucky for a couple of weeks and then we decided to do his first Grand Prix at the Classic Company’s show in Atlanta-and he won it!”

“After walking the course I nearly scratched it because it was so big and technical.  I didn’t because I just believe in him.  I always have this feeling about him.  I know with me he will be in good hands.  I thought it’s time for him to try it. I will give him the best ride to ensure he gets a confident and accurate trip.  I won’t miss,” she said.  “I thought, he can do it and even if he crosses the timers with a couple of faults, I will be happy with him. It was his time,” she added.

Paternoster said, “”My general thought was the course needed an experienced rider.  He built at a high level and if you’re not answering the questions as a rider, no matter how good your horse is, your horse will not. The horses needed help all the way around.  I think he accomplished what he set out to do,” she added.

Paternoster is currently riding for the movie Sunday Horse which is being filmed at the Georgia International Horse Park.  “It’s really cool seeing William Shatner,” she said.  As a child, she was also in the movie Black Beauty.

“We love the Classic Company shows,” said Paternoster, “We love the people and they are so professional and nice to work with-a million times better than the other show companies,” she added. “I’m looking forward to showing in Charleston.  The thought of the beach and the horse show rolled into one is great!  I can’t wait!” she said.