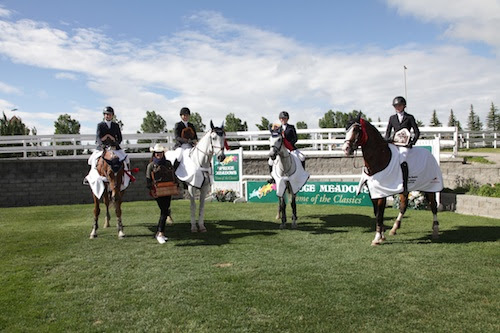 The $10,000 Paramount Resources Prix des Nations 1.40m was held on Meadows on the Green and featured a course designed by Portugal’s Cristina Larangeiro. Eight teams competed for top honors, and with a strong showing was team “Vintorious” led by Chef d’Equipe Vinton Karrasch.

Team trailblazer Bretton Chad (CAN) had trouble with The Pugilist, who was eliminated in the first round and did not return for the second round. The next two riders, Katherine Strauss (USA) on All In and Genevieve Meyer (USA) with Coral Reef Santos Utopia, had eight and four faults respectively. This is only the second show together for Keenan and Vanilla, a 12-year-old Danish Warmblood mare by Nabab de Reve x Clinton. Vanilla is out of Coral Reef Via Volo, Beezie Madden’s 2012 Olympic Games mount and is owned by Abigail Wexner. With Madden injured in May, Keenan has started riding Vanilla. “She’s had a lot of good rides, and she’s a really talented horse,” Keenan said. “I’m very fortunate to get the ride on [her].”

Keenan was excited to show in the Prix des Nations format, something that juniors and amateurs rarely get to do. She was on the gold medal-winning team at last year’s Adequan North American Junior Young Rider Championships and has experience riding for teams, but this extra opportunity is special, she said.

“To be able to compete on a team is invaluable experience, considering at the highest level, that’s what it is. Day to day, my teammates are my competitors, so to be able to team together and root for each other is really exciting. I think it’s an awesome experience,” she remarked.

Keenan will translate this experience into competing for the United States for the first time at the Furusiyya FEI Nations Cup in Bratislava, Slovakia, in August. “(Vanilla) has done real professional Nations Cup before, but not with me. This is an exciting step in that direction,” Keenan said.

Keenan, of New York City, is an experienced rider, despite being only 18 years old. This is her first time competing at Spruce Meadows. “The facility is incredible,” she commented. “I heard so many great stories about this place, but until you experience it, you don’t know what it’s like. I’m so lucky to be here and have the opportunity. Every single class is treated like it should be, which is important. The respect for the competitors, the sponsors, and the crowd, there’s no other competition like it.” Nine teams lined out for the $5,000 Paramount Resources Prix des Nations 1.20m, but all clear performances from the “Turnt Up 20s” team led by Conor Charlton took the top spot in the results after an exciting jump-off. The team consisted of: Christina Firestone (USA)/Zodiac (0/0), Jennifer Santana (USA)/Atomic 12 (0/0), Alex Crown (USA)/Quasito Z (DNF/0), and Riley Newsome (USA)/Touch and Go (0/DNF). They were tied with the “Dignelli’s Dynamos” team after two rounds, and in for the jump-off was Newsome and Touch and Go, who sped around in 33.096 seconds for the win over Chloe Reid on Damascus, who finished in 35.338 seconds. The ‘Canada One’ Tournament continues today with the $8,000 Thompson Family Cup 1.45m and the $33,500 Cargill Cup 1.50m. For more information and full results, please visitwww.sprucemeadows.com.

Based in Calgary, Canada, Spruce Meadows is the brainchild of the Southern family who built a Show Jumping complex at the foothills of the Alberta Rocky Mountains. It was in 1976 that the first Spruce Tournaments were held, with annual spectator attendances reaching over 50,000 by the end of the decade. Today, Spruce Meadows boasts one of the greatest outdoor equestrian venues in the world and offers an incredible experience for riders and fans alike. Spruce Meadows focuses on the organization and hosting of show jumping tournaments of unmatched quality for junior, amateur and professional athletes in a manner that reflects basic family values in a clean, green and welcoming environment that celebrates the horse and encourages the breeding and training of quality sport horses and the teaching and development of athletes. For more information on Spruce Meadows, please visit www.sprucemeadows.com.