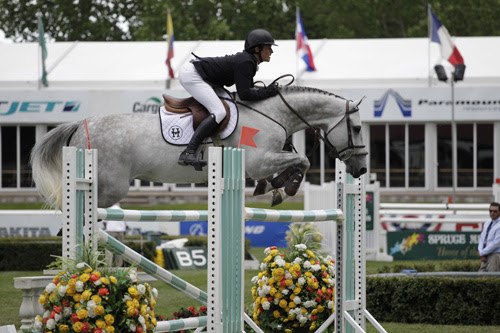 Calgary, AB, Canada – June 28, 2014 – The ‘Canada One’ Tournament at Spruce Meadows continued on Saturdayfeaturing the $33,500 McDaniel & Associates Cup 1.55m with a win for Ireland’s Darragh Kenny and Alpha VDL. The small margin of six one-thousandths of a second separated Kenny from second place finisher Kirsten Coe (USA) aboard Czardas 30.

The $8,000 Francis Family Cup 1.45m was also held in the Chinook Ring in the morning with another win for USA’s Richard Spooner, giving the rider three major wins with three different horses this week. The ‘Canada One’ Tournament concludes on Sunday, June 29, with the $125,000 Imperial Challenge 1.55m.

Cristina Larangeiro of Portugal was the course designer for the McDaniel & Associates Cup, which saw 17 first round entries, and seven advancing to the jump-off in the Meadows on the Green. Darragh Kenny and Eva Castegren’s Alpha VDL jumped the first clear round over the short course in 39.661 seconds for the win. Last to go, Kirsten Coe and Ilan Ferder’s Czardas 30 came incredibly close to taking over the lead, but finished just shy in 39.667 seconds. Ben Asselin (CAN) and Linda Southern-Heathcott’s Doremi completed the only other double clear round in 46.29 seconds to finish third. Alpha VDL, a nine-year-old Dutch Warmblood gelding by Corland x Emilion, has had great success with Kenny in the irons this year and continued his progression by jumping to victory over his first 1.55m track on Saturday. Kenny knew that his horse had the foot speed to win and went for a fast, clear round after the first three riders had rails.

“He is naturally a quick enough horse, and he has won some good classes already,” Kenny noted. “I knew there were places I could be quick. I left out a stride in one line. I did six where most people did seven. I wanted to just have a good round and see where I ended up with that.”

Commenting on Alpha VDL’s rise to the top, Kenny smiled, “His progression has been incredible. The horse has gone from jumping 1.40m classes at the start of Florida to winning grand prixs. He won a grand prix in Ocala, he won a grand prix in Saugerties, and now he won this 1.55m here. This is the biggest class he has ever had to jump, and he coped extremely well. It was great. His owner is here this week, so she got to see him, and it all worked out pretty well.”

Kenny explained that the course was good for Alpha VDL’s first track at that level, noting, “Although it was big, it was a little bit spread out. That was good for him because it gave him time between the jumps. He is a very good horse. He is only nine years old, and he has just been getting better and better. Every time we step him up he just seems to do really well.”

“He is quite conventional to ride,” Kenny added. “He is very careful, and he has a good style. Whatever way I ride him, he seems to like it, so it works good for both of us. He tries really hard to leave the jumps up and that is very important in this sport.” Second place finisher Czardas 30 is also stepping up his game this summer, and rider Kirsten Coe was very happy with his finish.

“It felt really good,” Coe stated. “That horse has really been knocking on the door. He has been coming along really nicely and jumping a lot of clear rounds. He felt very confident tonight, and I took a chance. He has been progressively moving through the divisions since we have been here. We are just building him up, but we really think a lot of him.”

Coe took over the reins on Czardas 30 this winter after the 11-year-old Hanoverian stallion (Contendro x Grannus) showed briefly with McLain Ward. She explained that it has been a great match ever since, and her mount really stepped up in Saturday’s final round.

“The jump-off was quite fast. There was plenty of room to gallop,” Coe noted. “I didn’t see Darragh go, but obviously it was very close. It was nice to have a top finish.”

Competition kicked off in the Chinook Ring Friday morning with the $8,000 Francis Family Cup 1.45m where Richard Spooner (USA) got his third win in a row this week. Held in a faults converted format, the competition saw 30 entries jumping a course set by Manuel Esparza of Mexico. About halfway through the order, Spooner and Tuxedo cleared the course in a time of 66.44 seconds that would hold on for the win. The 13-year-old Dutch Warmblood gelding (Gentleman x Hamilcar) is another brand new mount for Spooner riding for Legacy Stables LLC. “I don’t know what I ate, I don’t know what I ran into, but something happened right and I just have to try to figure out what it was,” Spooner smiled, commenting on his three-day sweep. He also won Thursday’s $33,500 Cargill Cup 1.50m with Cristallo and topped Friday’s $33,500 Duncan Ross Cup 1.50m aboard Uraguay. Although winning with veteran mount Cristallo is nothing new for the rider, Legacy Stables’ Uraguay and Tuxedo are both brand new horses that he has quickly figured out.

“Tuxedo is a wonderful horse,” Spooner stated after his win. “He is a top, top speed horse. I just got the ride of course, so we are still going through a little bit of growing pains, but today we felt great.”

“I am just learning the things he likes and the things he doesn’t like. He lets me know, which is nice of him,” Spooner said. “I think once I figure out the things that he is fond of we should hopefully have some success because he is unbelievably fast and careful and powerful. He actually really gets into it. He is a fascinating horse because you can feel him almost take over and he gets it. He gets that the goal is not to knock anything down and go as fast as you can, and if you get a horse that gets it like that, then they will be getting a lot of top ribbons.”

Detailing his round with Tuxedo, Spooner explained, “It was quick. I wouldn’t describe it as hair on fire, going 100% for broke, but it was quick and tidy. The horse is quite catty and his brakes are great, so you are able to really hit the gas when you land and stay off the brakes for longer than you can on other horses. Then you can kind of tap the brakes just a stride or two in front of the jump, and he settles right back into position. That gives you about a two-tenths of a second advantage at a good five or six jumps out there, and those tenths add up over the length of the course.”

Tuxedo is finished showing this week after a great win and will rest up for next week’s ‘North American’ Tournament. Richard Spooner and Tuxedo in their winning presentation with Adam Twa

Competition at the ‘Canada One’ Tournament will conclude on Sunday with the $33,500 West Canadian Cup 1.50m in the morning followed by the highlight $125,000 Imperial Challenge 1.55m in the afternoon in the Meadows on the Green. For more information and full results, please visitwww.sprucemeadows.com.

Based in Calgary, Canada, Spruce Meadows is the brainchild of the Southern family who built a Show Jumping complex at the foothills of the Alberta Rocky Mountains. It was in 1976 that the first Spruce Tournaments were held, with annual spectator attendances reaching over 50,000 by the end of the decade. Today, Spruce Meadows boasts one of the greatest outdoor equestrian venues in the world and offers an incredible experience for riders and fans alike. Spruce Meadows focuses on the organization and hosting of show jumping tournaments of unmatched quality for junior, amateur and professional athletes in a manner that reflects basic family values in a clean, green and welcoming environment that celebrates the horse and encourages the breeding and training of quality sport horses and the teaching and development of athletes. For more information on Spruce Meadows, please visitwww.sprucemeadows.com.

USHJA Establishes Training Grant with IHSA and PHA in Honor of...