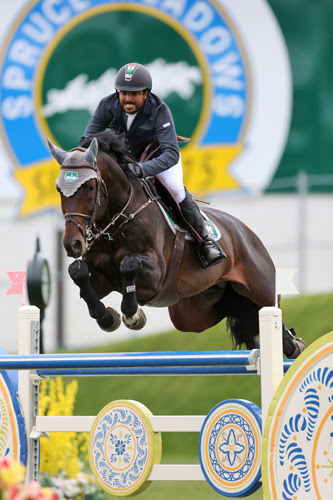 Calgary, AB, Canada – June 29, 2014 – The ‘Canada One’ Tournament at Spruce Meadows concluded on Sunday with a win for Mexico’s Nicolas Pizarro Suarez and Colasko in the $125,000 Imperial Challenge 1.55m in the Meadows on the Green. Will Simpson (USA) and Geledimar were victorious in the $33,500 West Canadian Cup 1.50m earlier in the day.

Cristina Larangeiro of Portugal was the course designer for Sunday’s main event, which saw 30 entries in total with five advancing to the tie-breaking jump-off. Pizarro and Monica Burrillo Eguia’s Colasko completed the fastest of two double clear rounds in 43.40 seconds to take their first major international grand prix victory. The top two belonged to Mexico, as Santiago Lambre and Johnny Boy completed the only other clear round over the short course in 43.77 seconds to finish in reserve. Venezuela’s Pablo Barrios had the fastest jump-off round with ZL Group, Inc.’s Zara Leandra in 42.54 seconds, but dropped a rail at the final fence to finish third.

As Pizarro was on course in the jump-off, he heard the announcer state that he was ahead in the intermediary time, but explained that he thought he was behind. “They said I was one-tenth ahead, but when I heard that I thought I was one-tenth behind, so I did a sharp turn,” the rider detailed. “When I came out of the turn I just followed to the last jump, but I can never focus on the blue and white rails. I saw a distance that was far too long, so then I pulled back and he really came back quickly and I had to push up again. Then I was a little bit deep. I was a little lucky, but in Mexico we have a saying that there is no champion without luck. Sometimes you have to have a little bit of luck, but today it came and it was a really fantastic day.”

Pizarro (35), the number one ranked rider in Mexico for over two years, has had two top Nations Cup finishes, earning a silver medal in Wellington and a bronze medal at the ‘Masters’ here in Calgary, but noted that this was his biggest individual placing.

Pizarro has had his winning mount Colasko, a nine-year-old Oldenburg stallion (Coleman x Granus), for four years and hopes to continue developing the talented horse to championship quality.

“It is really fantastic. I made this horse. I bought him when he was five and he was super green, so it is really amazing to build him up,” the rider stated. “He is really a stallion. He has a very good attitude, but at the end he is always a stallion, so you have to always give him a good ride. The minute he feels that you are forcing him to do something, he doesn’t like it at all, but he is always trying to do his best. The first week here I was just coming back from surgery for a broken collarbone. I could not even hold my hand, but he was always jumping well for me. He was right there. This week he was amazing since the first day.” Pizarro has been showing at Spruce Meadows for the last six years and was really hoping to get an international win this summer. As he was getting started with his day on Sunday, he was thinking about when the moment would come.

“This morning I was watching a student in the All Canada Ring and I was thinking. I always try to be patient, but this is my sixth year here at Spruce Meadows and I just thinking that there had to be a day that I would have an international win here,” Pizarro said. “I have been second and third, but I have never won. Then I went by the barns and I saw the ribbons that people have won and I thought one day I could have one, and it was today.”

Pizarro began riding at a young age and then became a professional 18 years ago. He also has many students and explained that it is important to jump at the very best competitions and push yourself to improve.

“I always try to do really good shows, and this is one of them,” he acknowledged. “I try to go to Wellington during the winter and spend the summers here because then you are in the real sport.”

As the summer continues, we will see more of Pizarro and Colasko next week. He plans to show in the 1.50m on Thursdayand will then jump Saturday’s $210,000 ATCO Queen Elizabeth II Cup.

The first competition in the Meadows on the Green on Sunday was the $33,500 West Canadian Cup 1.50m with a win for Will Simpson (USA) and Monarch International’s Geledimar, an 11-year-old Zangersheide mare by Grosso Z x Lord Z. Cristina Larangeiro set the track for 44 starters with seven advancing to the jump-off and five double clear rounds.

Kara Chad (CAN) and Stone Ridge Farms’ Alberto II jumped the first clear round over the short course in 42.81 seconds to eventually finish third. Ben Asselin (CAN) and Attache Stables’ Makavoy jumped next and stopped the clock in 45.17 seconds to finish fifth. Angel Karolyi (VEN) upped the ante in 42.41 seconds next with Hollow Creek Farm’s Indiana 127 to take second place honors. They were followed by Will Simpson and Geledimar, who clocked the winning time of 42.25 seconds. Eric Lamaze (CAN) and Artisan Farms’ Fine Lady 5 were last to go and finished fourth in 43.10 seconds. Geledimar has shown mostly with her owner, Hannah von Heidegger, but after the rider had a fall earlier in the week, Simpson took over the reins.

“I haven’t had a whole lot of rounds with the horse,” Simpson noted. “I have ridden her for a while and I know her well from training Hannah. She had a little bobble on another horse the other day, so she’s out for a little while, but she’ll be back. In the mean time, the mare has been a little bit of a handful. She has gotten to where she thinks she is queen of everything, so I thought it would be good to put the pedal to the metal a little bit and it has been great. She is a competitor and she is really coming into her own here, so Hannah is going to be anxious to get back on. She is kind of ironed out and going strong.”

Simpson had a fast time to beat following Angel Karolyi and Indiana 127, but he and Geledimar blazed through the course to take the winning edge. Commenting on his round, Simpson detailed, “I thought I was lickety-split everywhere. That is just the way it goes at Spruce Meadows. You have to go flat out everywhere. It was just the pace; I don’t think you could take much off. You had to be on it everywhere.”

This was Simpson’s first international victory at Spruce Meadows since winning a World Cup qualifier with Archie Bunker in 2010. “It has been too long,” he smiled. “It was nice to get back out here and get a win.” Based in Calgary, Canada, Spruce Meadows is the brainchild of the Southern family who built a Show Jumping complex at the foothills of the Alberta Rocky Mountains. It was in 1976 that the first Spruce Tournaments were held, with annual spectator attendances reaching over 50,000 by the end of the decade. Today, Spruce Meadows boasts one of the greatest outdoor equestrian venues in the world and offers an incredible experience for riders and fans alike. Spruce Meadows focuses on the organization and hosting of show jumping tournaments of unmatched quality for junior, amateur and professional athletes in a manner that reflects basic family values in a clean, green and welcoming environment that celebrates the horse and encourages the breeding and training of quality sport horses and the teaching and development of athletes. For more information on Spruce Meadows, please visitwww.sprucemeadows.com.