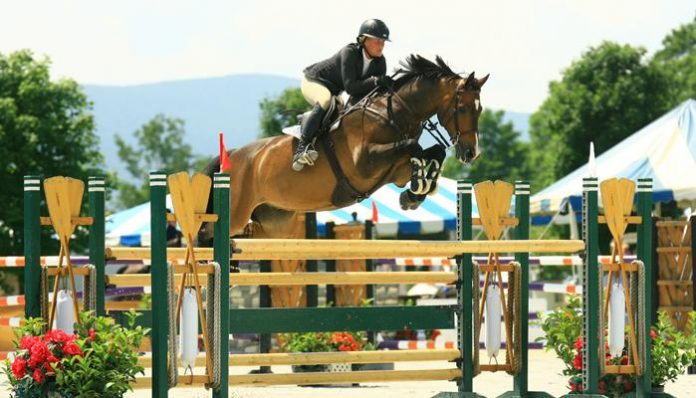 A total of four horses advanced to the jump-off over the track set by Irish course designer Alan Wade.  Two of those horses belonged to Flint, doubling her chances of victory.  When Flint entered the all-weather grand prix ring as the final challenger, she had only herself to beat.  Already holding the lead with a time of 38.62 seconds riding Chester VDL, Flint outdid herself, stopping the timers in 38.38 with Newlight VDL. “I’ve had him for a couple of years and brought him up in the young jumper classes,” said Flint of her winning mount, Newlight VDL, a nine-year-old Dutch Warmblood by Converter.  “I’ve shown him here for the past two years.  He’s a very careful horse, and super-fast.  He is very quirky and thinks a lot of himself; he knows everything!”

For her victory, Flint picked up her share of the prize money, as well as a $1,000 gift certificate from Polo Ralph Lauren and a custom Vermont Summer Festival presentation scrim from Mona’s Monograms.  As an additional award for second place, Flint was given a $500 gift certificate from New Balance, one of the newest brands under the Manchester Designer Outlets umbrella, which she planned to share with her staff in appreciation of their hard work.

Flint’s second-placed entry, Chester VDL, was purchased as a four-year-old at a VDL auction held in Ocala, FL.  Now seven, Chester VDL was the runner-up in the Five-Year-Old Young Horse Championships at the Hampton Classic.

“He is probably my favorite horse in the barn,” said Flint of the Dutch Warmblood by Silverstone x Matterhorn.  “I’ve done a lot of 1.40m classes with him and he’s won a lot, and this was his first 1.45m.”

Flint has been coming to the Vermont Summer Festival for 13 years, and will be hoping to repeat her winning ways in Saturday’s $30,000 Vermont Summer Special Grand Prix, presented by Johnson Horse Transport.

The Vermont Summer Festival offers a full schedule of hunter, jumper, and equitation competition.  The $10,000 Open Welcome Stake Series, presented by Manchester Designer Outlets, is held each Thursday while the week’s feature event, the $30,000 Grand Prix, takes place each Saturday at 1 p.m.  The $50,000 Vermont Summer Celebration Grand Prix will be held during the sixth and final week on Saturday, August 9.