Home Press Release Kelsey Thatcher Explains her Program for Success After Riding to the Top... 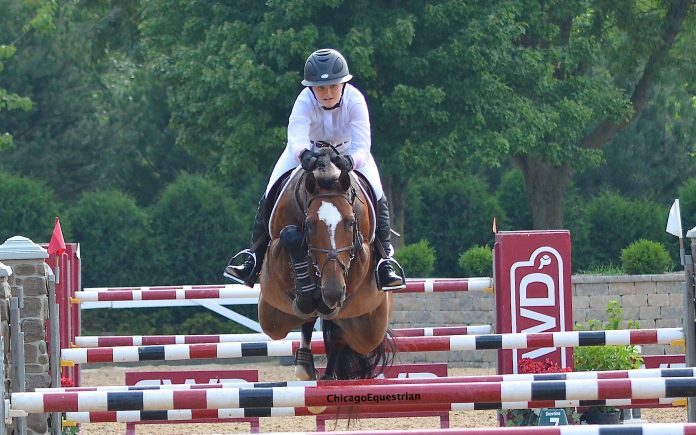 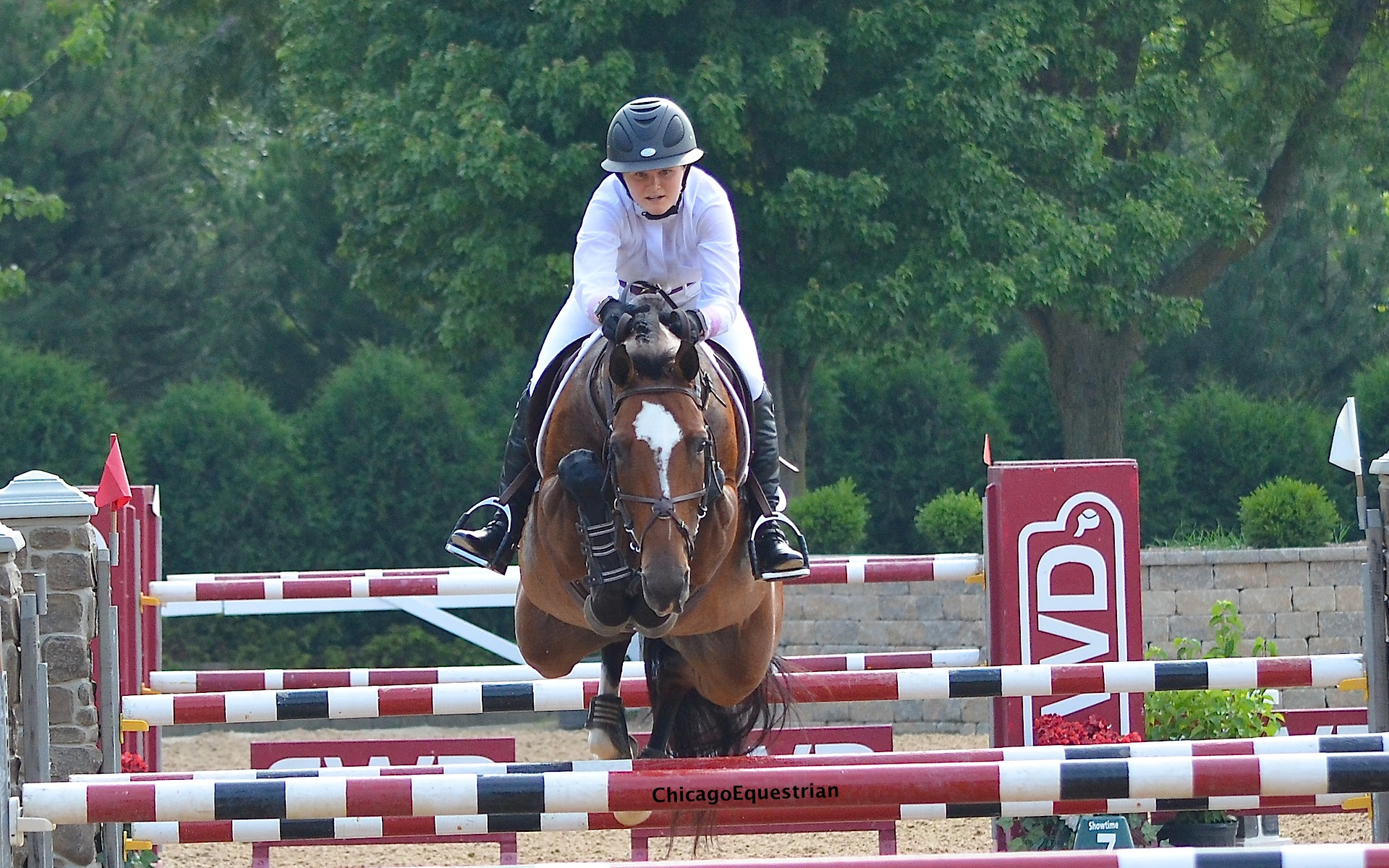 Kelsey Thatcher and Athena won the $35,000 Gand Prix de Lamplight.Wayne, IL – July 26, 2014 – Lamplight Equestrian Center hosted the $35,000 Grand Prix de Lamplight today during week one of the Equifest Horse Show series. VIP seating was available with delicious food, bar, and a fantastic view of the newly improved Grand Prix Ring. Twenty horses took a shot at the Greg Kuti designed course. Kuti set the bar earlier in the week with a tight time allowed in the Welcome Class. Kuti did not disappoint with the challenge today with places to gallop, places to shorten and an open water option. The oxers were set square and wide and the triple combination was early in the course. Most of the riders chose to jump the open water rather than the wide oxer option. The high heat and humidity affected some of the horses later in the long course causing rails and the triple combination caused some rails early in the track. Kuti provided a variety of challenges to test the horses and riders. “I like to set what I like to ride as a horseman,” said Kuti. “I like the power test early in the course. I put the open water in because it’s not used enough. I made sure there was a real scope test next to the water so it would be a comparable test. Then I dial down the time allowed

and make the turns so riders can be mindful of the time. Modern day jumping has a tight time allowed like at Spruce Meadows. The good ones will jump clean in the time allowed. I don’t like tricky jumps so the way to narrow the field is with the only other weapon I have which is the time.” Six horse and rider combinations passed Kuti’s test and moved to the jump off. Laura Linback of Mundelein, IL, was the first to go clean on Whittaker MVNZ with a time of 45.454. Next to go was Kelsey Thatcher and Pony Lane Farm’s Everything, who set the bar with another clean round and a fast time of 40.874. Liz Atkins of Hampshire, IL, and Niro 8 were up to the challenge, putting in a clean round with 41.964 but not quite fast enough to catch Thatcher.  Atkins won the Welcome Class earlier in the week on her other mount, Undine. 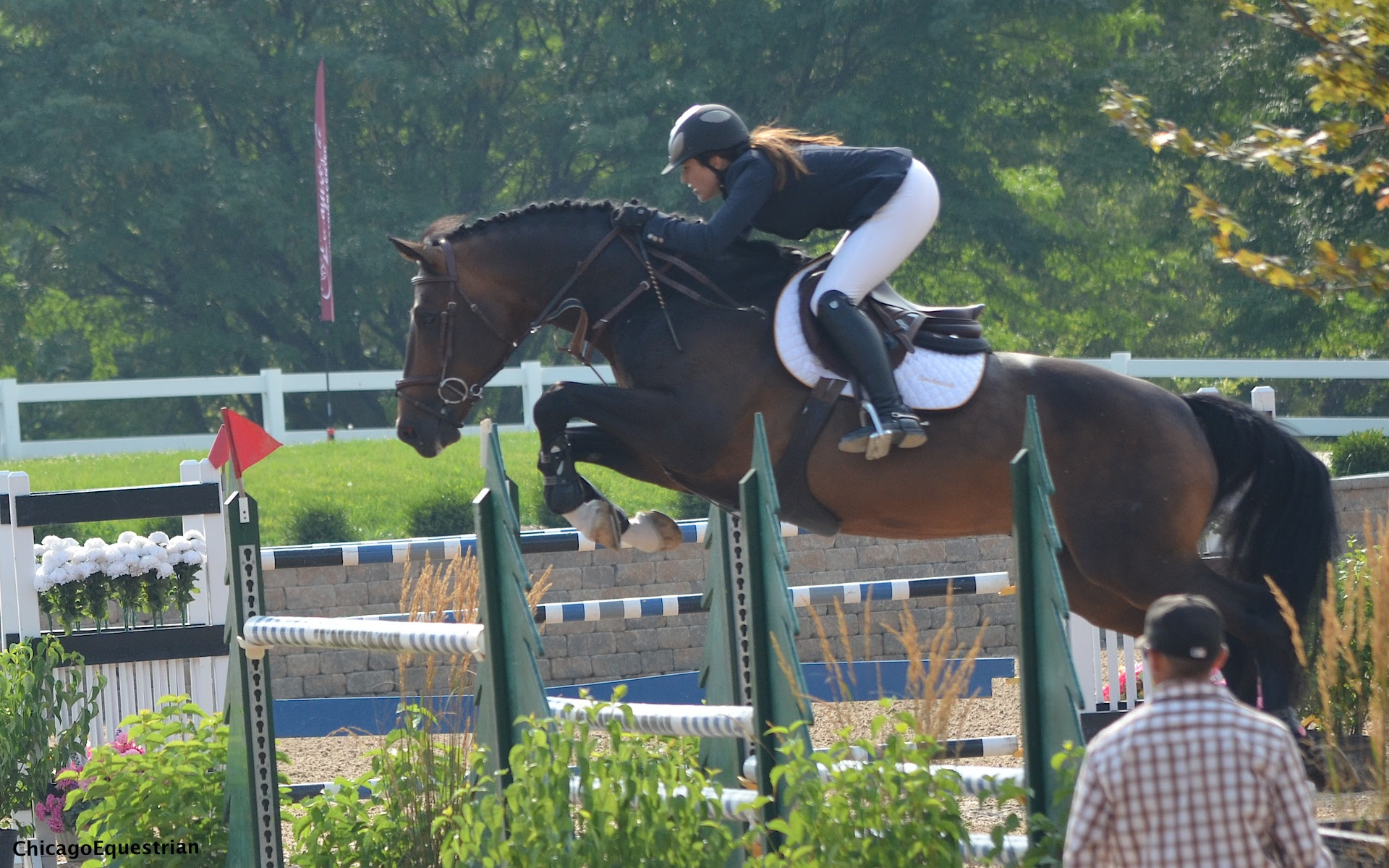 Liz Atkins and Niro 8 finished in third place.Thatcher still had a bullet left as she returned on Pony Lane’s Athena. The athletic mare jumped hard and galloped across the ring as Thatcher beat her own time on Everything with 40.030 for the win on Athena. Thatcher’s consistency of earning top ribbons in the ring is proof of the program she trains in. “It’s a team effort,” said Thatcher. “First it takes a good eye for a horse and that’s Alex. Then it takes this team of wonderful riders and trainers who can teach them to do almost anything. Then its years of riding and keeping it positive.” Trainer Maggie Jayne credits Thatcher’s consistency to her work ethic. “She works her but off!” said Jayne. “She keeps herself in shape and works out. I don’t think a lot of people take that part seriously. Mentally we also work hard on keeping it positive and how to make it better for the next class. It’s always about keeping the horses and the riders moving in a forward direction toward their goal without doing too much.” 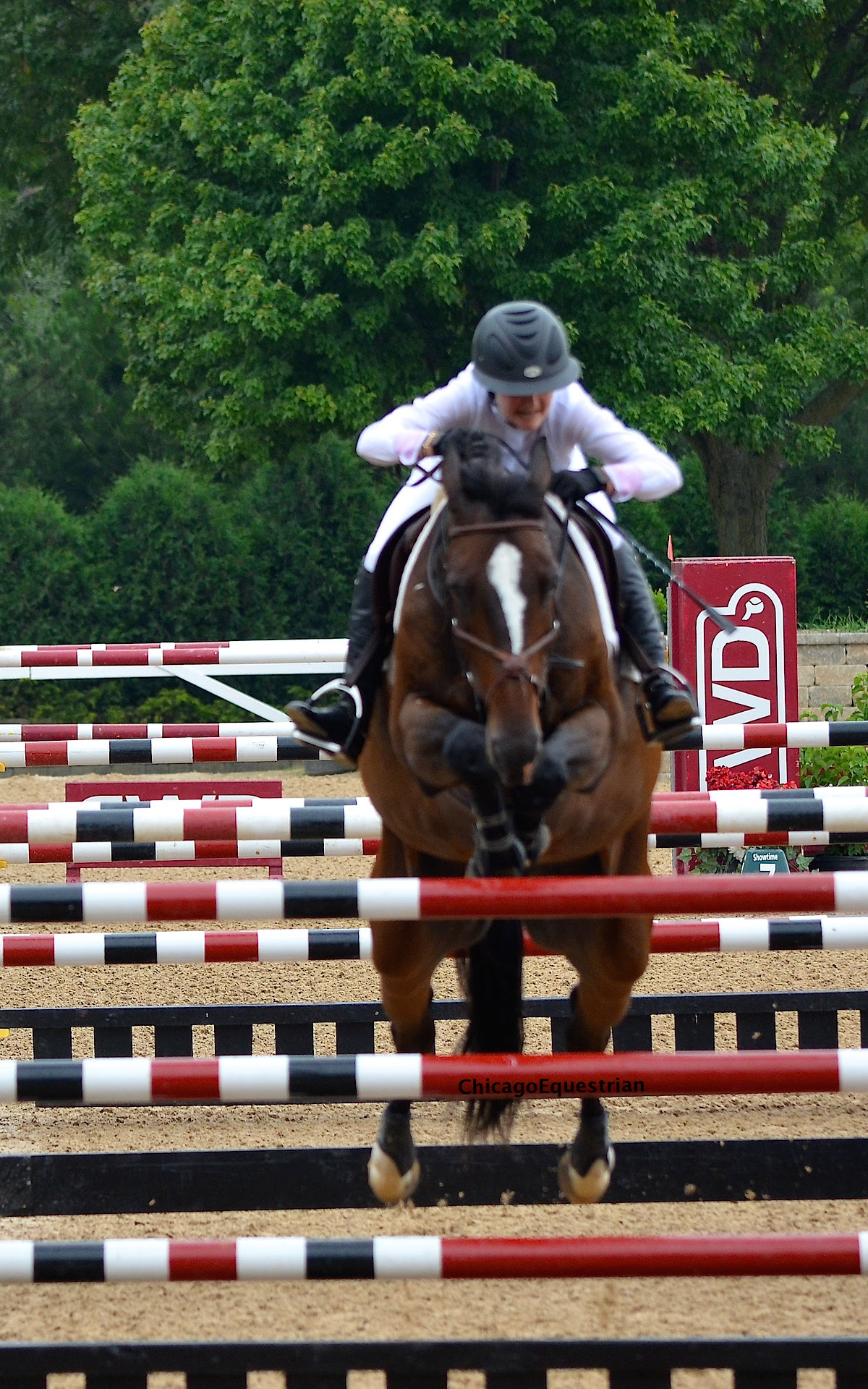 Kelsey Thatcher took the second place spot with Everything.“I love to run,” said Thatcher. “I signed up for a half marathon at the end of October.  I like to treat my body with respect and I’m careful of what I put in my body and I always feel better after I work out, I feel like an athlete.  I’m never going to be a Victoria Secret model but I feel good!” Even though the Jayne group rides a dozen horses each a day, you can still find them at the gym. “When we’re in Wellington you see all the top riders there at the gym,” added Haylie Jayne Rolfe. “They take it seriously.” 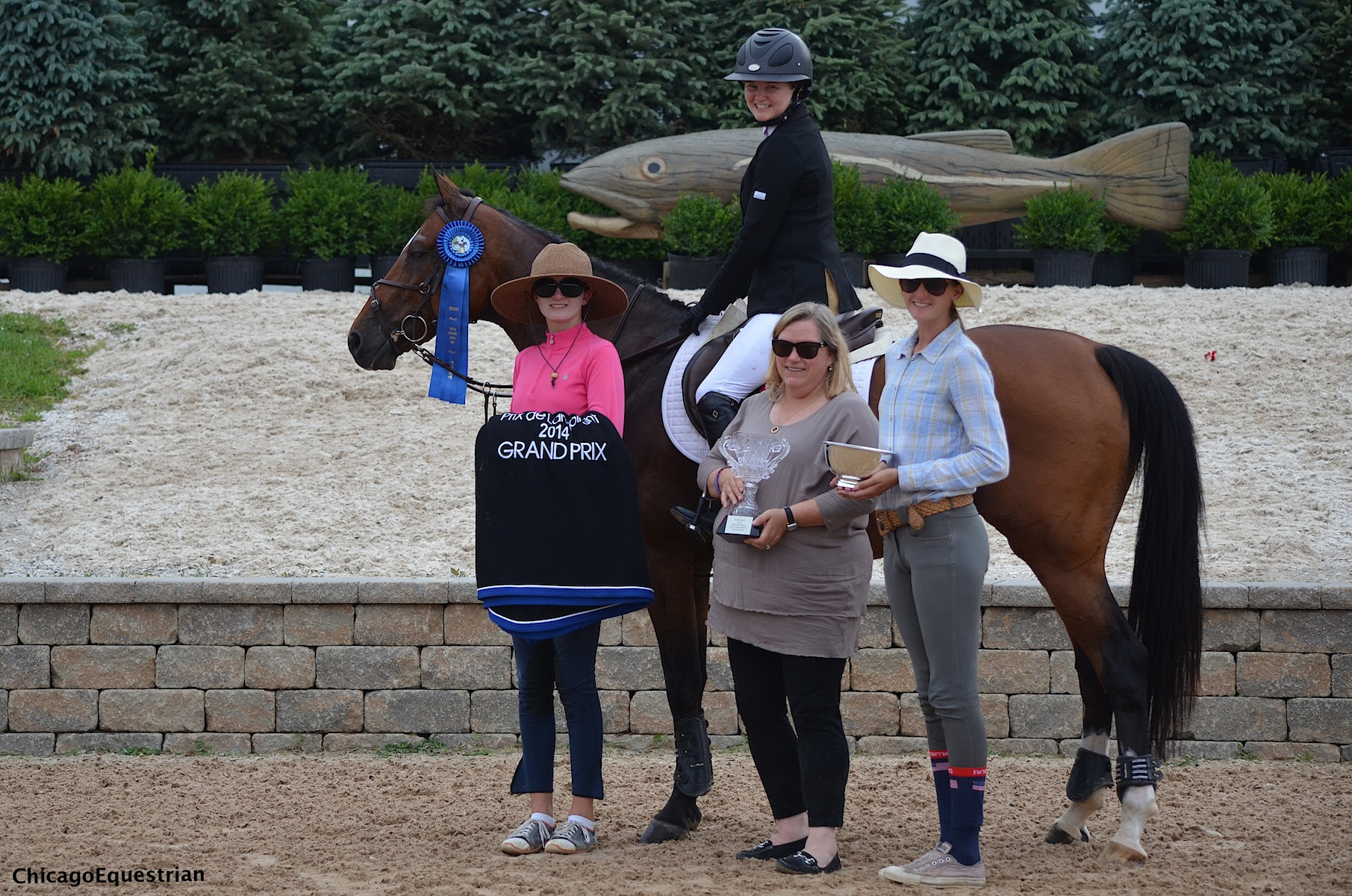 Lamplight owner Nina Moore presents the trophy to Thatcher and Athena with Maggie Jayne and Haylie Rolfe.Thatcher is from Bluffdale, Utah and lives in Athens, GA. She also rides in the Amateur Owner Hunter division and has earned numerous Championships from the hunters to add to her resume. Thatcher recently graduated from the University of Georgia with a degree in early childhood education and will be heading back to Georgia to start student teaching. Equifest I finishes out the week with multiple jumper classics and the $7,500 Cavalor Show Jumping Hall of Fame class.  The hunter divisions also come to a close as the division championships are awarded. The Equifest I and II shows are managed by Allen Rheinheimer and feature a $5,000 USHJA National Hunter Derby each week and the $35,000 Prix de Lamplight on Saturday afternoon each week. The two-week series concludes with the $15,000 USHJA International Hunter Derby along with a fantastic Derby Brunch. One lucky exhibitor who competes both weeks in the 3’6″ Junior or Amateur Owner Hunters will win a saddle from sponsor CWD. Lamplight Equestrian Center has been host to a number of prestigious horseshows including the American Eventing Championships, The Markel/USEF National Young Horse Dressage Championships and the U.S. Para-Equestrian National Championships in addition to countless first-class Hunter shows, Jumper shows, Eventing competitions, Dressage shows and Sporthorse Inspections. Numerous facility improvements including GGT Footing, make Lamplight Equestrian Center Chicago’s premier horse show facility. For more information on any of the events, contact Anna Margalef at 630-546-5576 orannam@lamplightec.com or visit the website at www.lamplightequestriancenter.com  $35,000 Grand Prix de Lamplight

The Future is Bright For Baroness and Luis Fernando Larrazabal Winning...