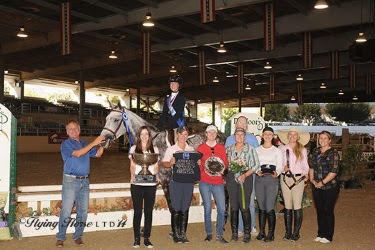 Michael Leon and Freedom Steal the Show Once Again

Medal final season is in full swing, and members of the Los Angeles Hunter Jumper Association had their chance to strut their stuff at the Gold Coast End of Summer Show (Aug 28-31). Fourteen-year-old Kimmie Lull (Elvenstar, trainer) was thrilled to earn her first medal final win in the LAHJA/Betsy Woods Horsemanship Final aboard Clic Clac (Elvenstar Farm, owner). “Going into the first round, my plan was try and keep an even rhythm,” Kimmie explained. “The course [Michael Roy Curtis, course designer] was really well designed, both tricky and fun. It rode like a handy hunter round. I just kept to the track that I walked and ended up in first place for the round.”

Leading the pack going into the second round added to the typical medal final nerves. “I think there was a lot of pressure that got to my head,” Kimmie shared. “There were two tight turns off the rail both ways. I was trying to focus on taking all the inside tracks and get my lead changes.” However, the nerves got to her and her performance was not as smooth as she would have liked, dropping her to fifth place for the second round.

After her disappointment in the handy round, Kimmie was determined to prove herself in the work off. “We had to walk out of the line, canter a single fence on the diagonal, then make a tight rollback to a trot fence right in front of the judges,” she recalled. “Then we came around to hand gallop an oxer on the quarter line and turned off the rail to a single fence. Then we halted and sat the trot back to the line. Luckily, my hand gallop was something we had really been practicing for the medal finals.” Prove herself she did, and after a beautifully executed test, she was named champion.

Elvenstar had quite the successful weekend in the medal finals. Kimmie’s barn mate Paris Sommerfeld also had her first medal final win, clinching the championship in the LAHJA Rosewood Medal Final, Presented by Damoor’s Feed & Tack, aboard her Cantare E. “I just got my new horse about six months ago,” Paris commented. “Last year I was fourth place in the LAHJA Rosewood Medal Final with a horse I was leasing, so it was really a goal of mine to win this year.”

Paris was in eighth place coming out of the first round, but made up for it by winning the handy round. “The second round went much better,” she said with a smile. “I was second going into the work off. I really liked the work off because I had to demonstrate all of the tests we’d been practicing like counter-cantering, trotting a jump, and hand-galloping.”

Fifteen-year-old Paris is very dedicated to her riding, so she arranged her school schedule to take zero period classes and independent studies for PE in order to have the time to ride almost every day.

In the hunter ring, Michael Leon and Freedom (Anna Sophia Lotman, owner) earned themselves another win, and their consistency is paying off. The pair won their third Gold Coast Series USHJA National Hunter Derby of the year, pocketing a $1,500 LEGIS Hunter Rider Bonus. “It was more challenging than usual,” Michael explained. “It was a great class with a lot of competent horse and rider combinations. Rebecca Bruce had a wonderful first round, coming in one point ahead of us.”

Rebecca Bruce and Cristallo (Christine Phillips, owner) came in a close second with an overall score of 175.5. This pair already won a Gold Coast Derby this year, so they have a chance to earn a LEGIS Hunter Rider bonus check if they win another derby during the 2014 season.

Rebecca plans to come back to the Gold Coast October show and give it her best to win the bonus check. “Michael and I have a very friendly rivalry, and I think to spice things up we should swap horses in the second round of the next derby,” Rebecca joked. “I’ve been second to Michael twice this year. It’s always nice to win a bonus check, but regardless I am very proud of Cristallo because this was only his fourth derby. The course design played into Cristallo’s strengths, especially the first round, because he likes the long rides where he can really open his stride.”

While Rebecca and Cristallo excelled in the first round, Michael’s plan was to gain points in the handy round. That’s exactly what he did, earning an overall score of 181. “There were a lot of single jumps to show off Freedom’s galloping open stride and options to turn on tighter tracks,” Michael commented. “I was confident since Freedom had done this many times before. He’s getting stronger and stronger about understanding his job and being keener to what I want.”

As for the $1,500 LEGIS Hunter Derby Rider bonus check, Michael plans to invest it back into his barn, Windsor Stables. “I want to perhaps get a new golf cart for the barn,” Michael shared. “Or maybe I’ll take a mini vacation. I think it’s fantastic that LEGISequine and LEG offer these additional awards for professionals. We work such long hours at the barn and so many hours outside of it doing the desk work. Both the rider bonuses and the trainer incentives offer us an opportunity to get away and do something for ourselves as professional athletes.” Michael’s student, Kathryn Martin, also showed in the class. She piloted Rock Royalty (Pinon West LLC, owner) in her first hunter derby, placing twelfth in the 26-horse field and earning the honor of high-point amateur rider.

Elsewhere in the hunter ring, Amy Brubaker (Rebecca Bruce, trainer) and Frascati (Rebecca Bruce, owner) earned the championship in the Adult Amateur Hunters as well as the USHJA Zone 10 Stirrup Cup Low Child-Adult Hunters Finals. “I just got back from spending four years in India,” Amy explained. “I used to ride at Rainbow Canyon Ranch with Rebecca when she was little. I came back to visit the Bruce family at Thanksgiving, and that’s when I first rode Frascati.”

Although Amy played some polo in India, she’s just getting back into the swing of the hunters. “I was really nervous, so I just tried to remember the course and count the strides. Nothing more complicated than that,” she recounted. “Frascati is really a wonderful young horse. I was just trying to get more miles under my belt and get more comfortable riding.” Amy has relocated to Salt Lake City, Utah for her work. She will be riding near home during the week and flying to Los Angeles to show on the weekends.

Riders of all levels from first through twelfth grade competed in the annual Riding For Reading Class. Participants earned books for their schools, thanks to Reading For Riding, a non-profit organization that aims to help school libraries get new books and young equestrians gain recognition at their schools. Fourteen-year-old Ashley Taylor (Joe Thorpe, trainer) won the class on Footnote (Georgia Storm-Claessens, owner), her second year in a row to claim the top spot.

“I was not expecting to win it,” said Ashley. “It’s so rewarding when you do well when there’s a lot of people of all levels in one class. I always think about sitting up straight and keeping my horse on the bit. A fun fact is that I will get to pick out the category of books that are donated to my school. It’s always exciting to have new books to read at school and to give back to the community.” Ashley and Footnote also won Small/Medium Pony Hunters Reserve Champion.

In the jumper ring, Chris Peters (Michael Leon, trainer) and his new eight year-old horse, Himeros, placed second in the USHJA Zone 10 Stirrup Cup Finals in Adult Amateur Jumper division. “My plan was to stay on and do the best that I could,” Chris explained. “It was only my third show with Himeros, so we were not necessarily going for a win. He has a big heart and does not want to hit the jump at all. He would rather jump six feet over than take a rail. He has amazing scope as long as you’re confident and make a decision.”

Chris isn’t in a rush to push his horse. “We take it one day at a time,” he said. “This horse has a lot of potential, and we will move up as we feel comfortable. The partnership between he and I works out so well. Michael pushes me to my limit to be even more confident.” Michael rode Himeros to 1.20M Stirrup Cup Finals Champion.

Now that Chris has returned to riding after taking a break to establish his career, he must work hard to balance his time. “I work in the computer start-up world,” he shared. “I work primarily for a company called Airpush and I’m also working on creating a new equestrian start-up. Because of my busy schedule, every day has a very consistent plan. I need to ride so that I can work efficiently and go to the gym so that I can ride well.  I ride about five to six days a week, and I primarily ride first thing in the morning before work.”

In the Outreach ring on Sunday, ten-year-old Victoria Piemonte (Susan Artes, trainer) and Caribik (Eliza Coleman, owner) earned a championship in the Walk-Trot-Canter section. “It was a great way to leave the summer off with a bang,” said Victoria with a smile. “When I heard that I was champion, I was confused at first but then I realized it was really me. I was so excited.” As a fifth grader, Victoria spends a lot of time on homework during the week and only gets to ride Friday through Sunday during the school year. She is looking forward to jumping higher and hopefully moving up out of the Outreach classes.

For more information about Gold Coast End Of Summer, including complete results, visit the LEG website.

Connect with LEG on Facebook for news, photos, contests, and more!