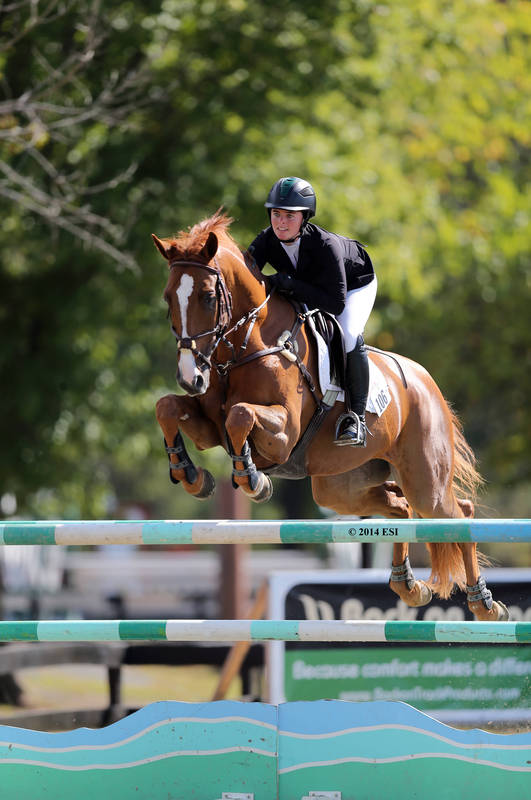 Cienne Warren and Fabius Give a Fabulous Performance to Win the Pyranha $10,000 JR-A/O Jumper Low Classic

and November Comes Full Circle and Wins For Alexa Lowe-Wiseman

The events provided exhibitors and spectators alike with a feast of Equestrian speed, beauty and style.

Cienne Warren, 22, of Tinton Falls, New Jersey had her eyes on the prize going into yesterday’s Pyranha $10,000 JR-A/O Jumper Low Classic–and her 11 year old chestnut gelding Fabius (Holsteiner/Warmblood), did not disappoint.  They won the class with confidence and panache.

The pair topped seasoned competitors from all corners of the Northeast and points South.  “Fabius and I have been together nearly two years. He has a awesome personality and we have a strong bond. He’s given me the confidence I needed to move from the Equitation all the way up to the 1.30m jumpers,” Warren said after their win.

Only two other pairs went clear and returned to the jump off. Designer Florencio Hernandez’s (Mexico City, Mexico) course was deceptively modest and required riders to make quick decisions.  “My strategy going in was to stay forward coming out of the turns,” Warren said. “In the jump off I focused on just going clear and giving him the freedom to open up his huge stride.”

Warren also felt the courses earlier in the week were “good prep” for Sunday’s class.

Ultimately, with clever last minute decisions, confidence and a faultless time of 42.71–Warren and Fabius emerged the victor.  Debbie Foote on her own Neilson B was second with a time of 45.06.  Alden Moylan and Pimpernel went the fastest at 42.00, but had a rail and settled for third.  Felica Russell and Tambo Beduin took fourth while Remonta Haron, owned and ridden by Michael Mahoney, capped the top five.

Warren is a working student for Helen Goddard and Yellowbrook farm in Coltsneck, New Jersey. She also attends a nearby college part time when not at the barn or on the road competing.  Goddard called her, “A diligent young lady with ambitious goals.”  “She started in Adult Equitation but quickly found the joy of jumpers and has a very talented mount in Fabius,” added Goddard.

“My mom always travels to the shows with me but today my whole family was here, including my dogs to give me a little extra luck!,” said Warren.   Luck was with her indeed. According to Goddard going last in jump off was golden for Warren: “She opted out of a difficult inside turn to the skinny CWD jump that the first rider had down.”

Both Goddard and Warren commended HITS Culpeper’s new footing, “beautiful new barns and lovely relaxed setting.”  “All the HITS shows are favorites of myself and clients,” noted Goddard, “We schedule our year around them.”   Warren plans to move Fabius up to the medium jumpers at HITS Ocala in 2015.

When asked what her high point of the class was Warren shined a smile and said– “Going over the last fence knowing we were clear and hearing I had won… finally being able to lead the victory lap.”

For over 40 years Pyranha, Inc has been innovating and providing pest control solutions for the residential and livestock industry. Pyranha not only offers ready-to-use and concentrated insecticide products as well as their misting systems, but they also offer a line of odor-management products ideal for homes, kennels, livestock areas and more. For more information on Pyranha, visit pyranhainc.com

Amateurs and Juniors alike competed for the same pot of gold. While all were deftly on their game, it was Lowe-Wiseman and November’s dazzling round that took top prize.  “It was really effortless for him…he was having fun,” she said afterwards.

The pair stopped the clock at 34.39, two seconds faster than the next highest finisher, Melissa Rudershausen on her own Abracadabra (36.85).  Darby Toben riding D’Artagnan for Doreen Toben was third with 37.76,  Sandra Zimmerli on her Apollo Mission fourth with a time of 38.99 and Habsburg 2, owned and piloted by Felicia Russell was fifth.

The technically demanding courses Hernandez is famous for appeared again for this class.  Lowe-Wiseman said it was, “Not overwhelming or hugely scopey but challenged riders to think on their feet and horses adapt quickly.”  She knew she had to be fast in the jump off given the times before her and competitive nature of her peers.

“November covered this course with relative ease…he’s  smooth and perfect if I just stay out of his way,” she added.

Lowe-Wiseman found November in Europe two years ago while looking for a more seasoned Grand Prix mount.  The 13 year old Selle Francais gelding was a member of the Swiss Nations’ Cup team and “pro” compared to many horses she had ridden.

What’s remarkable is despite Lowe-Wiseman traveling abroad to find, November was actually born and raised in Middleberg, Virginia, less than a mile from her family’s stable Windsor, at Bert and Diane Firestone’s Newstead Farm  (November is affectionately known as “Bert”).  The Firestones had him nearly five years before selling to a buyer in Europe.

In essence, November has come full circle and now home, happily in Lowe-Wiseman’s barn.  The past year the pair really came together,  placing well in every Grand Prix and class they entered (Third in an extremely competitive field at the Zoetis $75,000 HITS Saugerties Grand Prix this past summer too.)  Though she readily admitted making a mistake in the Gold Cup a few weeks before Culpeper, and decided to step back and compete him in the Amateurs this week.   That excellent decision paid off.

“He’s a really ride-able horse, able to win any jump off–we made a super fast turn to the second jump and sped down last line…every distance came up perfect”

According to Lowe-Wiseman November is quiet and lovely enough for her two year old son to ride–yet also one of the most powerful horses she has ever ridden, with unlimited potential. The win was also special to her as this was their last show of the year  before heading to Florida in January.   She took a moment to appreciate the improvements HITS made last winter to the footing in warm up areas,  new stabling and “overall polish and upgraded feel the facility now has.”

Lowe-Wiseman’s final words words hit a serious and determined note regarding the future and pair’s goals: To qualify for and compete in the $1 Million Dollar Grand Prix in Saugerties September 2015.

It seems there’s little that will stop them. 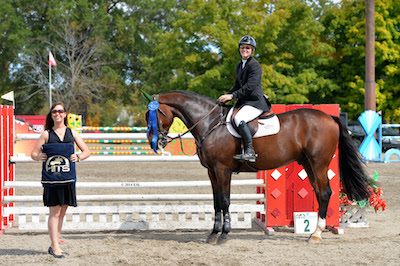 Bayer Animal Health is amongst worldwide leaders in animal health. Bayer has attained this leadership position by continuously researching and developing products for animal health since 1919. A responsible relationship between humans, companion animals and livestock requires ensuring the health of animals. For more information on Bayer Animal Health, visit Bayer.com.

Between top competition in the Grand Prix Ring and dynamic array of hunter and jumper classes for every level, HITS Culpeper 2014 was a terrific success. We hope all who attended have warm and delightful memories.  Likewise, appreciation of the complete face-lift the facility underwent last winter was kindly expressed by exhibitors.

Many are planning now and looking ahead to the HITS 2015 Winter Season in Ocala. Qualifying for the HITS Championship shifts into high gear during the winter months. Perhaps we’ll see you during the 2015 Winter Circuits too!

Again, HITS sincerely thanks the sponsors, exhibitors and fans who made this one of the exciting Culpeper Series to date. We look forward to welcoming riders and horses back to Commonwealth Park in 2015.