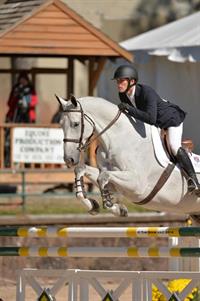 Gladstone, N.J.– The 2014 Platinum Performance/USEF Talent Search Finals East came to an exciting conclusion Sunday at the USET Foundation Headquarters as Geoffrey Hesslink was crowned champion. Following the completion of Phase III, Andre Dignelli-trainees Hesslink with Peacock Ridge LLC’s Canny Windsor Z, Lillie Keenan with Isabelle Caccamise’s Catwalk 19, and Caitlin Boyle with Chansonette Farm LLC’s Zentina B, joined Stacia Madden-trained Megan MacPhearson with Meridian Partners LLC’ Class Action atop the leaderboard.  The four were called back for the final Phase where each rider completed an eight-obstacle course on their own horse, and then the three other riders’ horses.

Hesslink (Shelburne, Vt.) turned heads throughout the weekend with stylish performances in all phases to capture the attention of the judges and spectators. He earned the coveted Platinum Performance/USEF Talent Search Finals title after finishing Phase IV on a total of 371, posting the highest totals of the afternoon on Catwalk 19 and Canny Windsor Z, 95 and 94, respectively, as well as earning a 92 on Class Action and 90 on Zentina B.

“He looked totally at ease, every round he just kept doing it and then with the change of horses he just kept nailing it,” said Jimmy Torano, who judged alongside Laura Kraut.

At 19-years-old Hesslink has aged out of the junior division and came to Gladstone feeling he was ready to win his first national title.

“It hasn’t really hit me yet,” said Hesslink. “I didn’t expect it, and I am very excited and grateful. I was nervous because this is my only final, but I was confident because we were over prepared for this event. I felt like I had a chance.”

Daisy Farish (Versailles, Ky.), who led competition after two phases finished in fifth place. After scoring an 86 in Phase III she stood tied with Keenan on an overall score of 357. However, the tie was broken and the eventual Reserve Champion advanced to Phase IV as she had the higher score in Phase III, an 88.

The Grappa Trophy was awarded to Zentina B as the best horse of the competition.