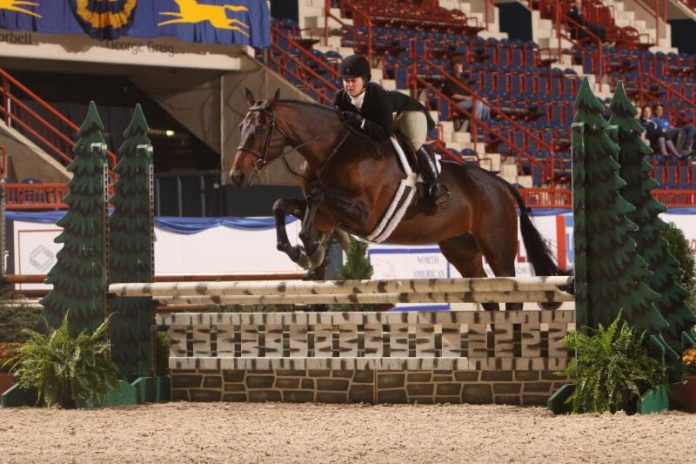 Harrisburg, PA – October 13, 2014 – Chelsea Ireland of Chesapeake, VA, and her horse SURELY claimed victory today, winning the $10,000 North American League (NAL) Adult Hunter Finals against a very competitive field of 29 entries. Riders compete all year across the nation to qualify for the Finals at the Pennsylvania National Horse Show

“It feels great to win!” said Ireland. “My horse has been such a good girl ever since we’ve had her. I’m excited for her to get a blue ribbon. She just came back from being injured, and the win made it even more exciting because we didn’t get to practice much this year.”

Ireland and SURELY produced a smooth first round over the 10-fence course which scored 84.00 points. The pair produced an even better ride over the second round 8-fence course to score 86.00, giving them a total score of 170.00 which shot them straight into the winner’s circle. In addition to the champion title and first place prize money of $3,000, Ireland also won the Lisa A. H. Cudahy Perpetual Trophy. Ireland earned 1,050 points this year in the 2014 NAL Adult Hunter Division.

Melanie Jeanes, of Dallas, TX, and her own CARRERA took second place, producing two harmonious rounds which earned them 83.50 in the first round and 84.00 in the second round. This was Jeanes’ first year competing in the NAL.

“It was so much fun, and it was probably the best experience I’ve ever had.” said Jeanes, who finished fourth place overall in the 2014 NAL Adult Hunter Division with 3,355 points. “To be second in the NAL Finals means the world to me. It’s really gotten my confidence up. The courses were beautiful, really open, and rode very well.”

When asked about her mare CARRERA, Jeanes was almost moved to tears. “She’s been a hunter for 4 months, and she’s just incredible. I love her more than anything in the world. She has the biggest heart – she’s so brave and so smart. She doesn’t even need me, she could do it all herself!”

The qualifying period for the NAL runs from September 1 through August 31 and anyone can compete in NAL qualifying classes. However, only current members are awarded points. Joining the NAL is the best way to ensure that you get the points necessary to make it to the finals and annual memberships are only $40 per rider.

For more information regarding the North American League series please call (717) 867-5643, email to NAL@Ryegate.com or visit www.ryegate.com. Follow us on Facebook atwww.facebook.com/NALFinals.