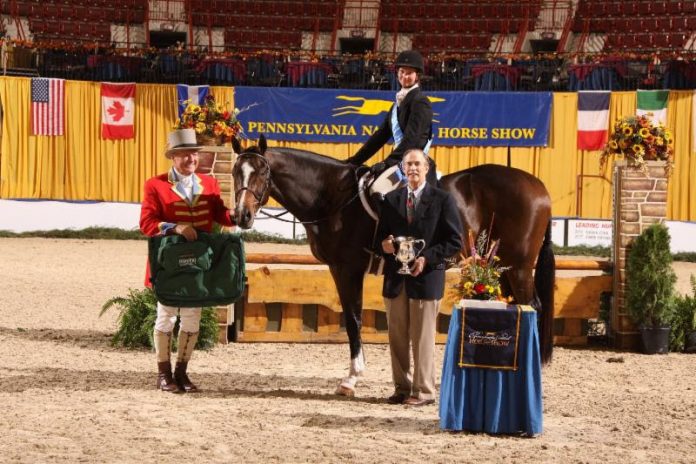 Harrisburg, PA – October 13, 2014 – It was a night of ‘old tradition’ at the Pennsylvania National Horse Show as 19 Hunt Clubs, including hounds, huntsmen, and horses, took over the main arena at the Farm Show Complex for Hunt Night, sponsored by Kinsley Construction.

The competition was steep in the Field Hunters Competitions, in which each horse and rider competed over a course of eight natural-type obstacles. In the Field Hunter 35 & Under class, 34 competitors representing various hunt clubs took part, and it was two members from the Keswick Hunt that took the top placings. For the second consecutive year Jill Wilson and APPLE clinched first place and the Max C. Hempt Perpetual Trophy, while Jordan Sipes and EN VOGUE took second.

Wilson and APPLE had a very successful night, and claimed victory in the Ladies Hunter Under Saddle competition in a class of 36 riders, winning the Betty Baldwin Meister Memorial Perpetual Trophy. Wilson was also presented with the “Polly” Gingrich Caswell Perpetual Trophy for winning the prestigious Leading Lady Rider Award, which she has now won six consecutive times.

“This is my sixth year being Leading Lady Rider, and second year on this horse. It feels awesome! Hopefully next year I’ll be in the professional division, so this may be retirement.”

In the Field Hunters Over 35 competition, 22 riders took part in the class, and it was Rebekah Robinson and her massive chestnut BALLAGHMORE SUITE from the Radnor Hunt club that claimed their second consecutive win, and the Chairman’s Perpetual Trophy, while Cindy Buchanan and THE LONE SPY from the Mr. Stewart’s Cheshire Foxhounds took the runner-up spot.

“He is the best horse ever,” said Robinson. “He won this last year, and now he’s comeback and done it even better. He’s 18 years old, fox hunts regularly, and just loves it.”

Stevie Hayes and THE LONE SPY from Mr. Stewart’s Cheshire Foxhounds won the Gentleman’s Hunter Under Saddle class and the Rose Tree Perpetual Trophy against a field of 12 other riders, while Sandy Rives and CRUISER from the Keswick Hunt took second place.

“That makes 7 years in a row that I’ve won the hack. It feels great, but I’m ready to retire!” said Hayes. “I went off course in the over fences, so I have to comeback next year and redeem myself. It’s always one of the best horse shows, and it’s always really fun.”

The exciting Hunt Team class is always a favorite for both the riders and spectators. Teams of three horses and riders jump around the course in single file at a ‘safe hunting distance’ until the last obstacle, which they jump over side by side. Some teams were better than others, but all received loud cheers and whistles from team members and fans in the stands. For the first time in 19 years, the Radnor Hunt took the title and the Potomac Hunt Challenge Trophy, beating 18 other teams for the prominent award after a super round in unison.

The Hunt Night Championship closed the evening, with the Keswick Hunt claiming the bragging rights to the Ralph A. Alfano Memorial Perpetual Trophy, while Mr. Stewart’s Cheshire Foxhounds were runners-up.

​Grand Champions Run in the Family for Alexa Karet