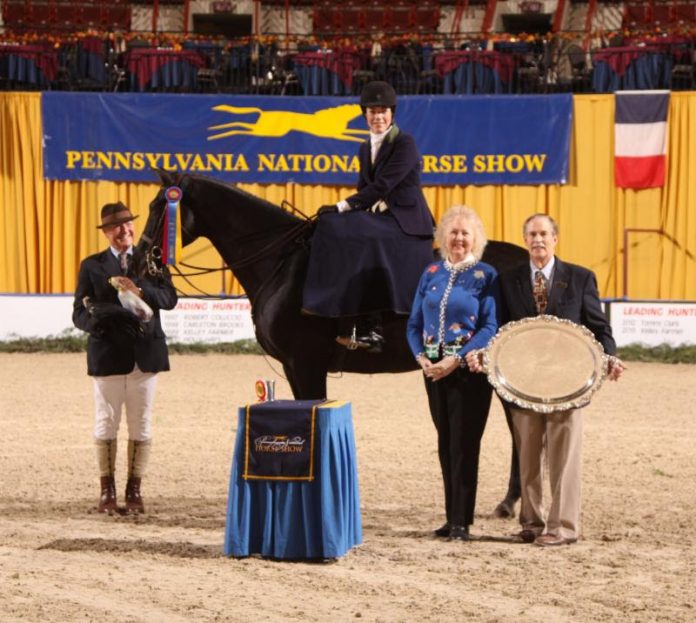 Harrisburg, PA – October 14, 2014 – It was like a step back in time at the Pennsylvania National Horse Show as the ladies, dressed in their finest traditional hunt attire, took over the arena for the Ladies Sidesaddle classes, sponsored by Mr. and Mrs. Richard L. Hornberger.  Devon Zebrovious of Middleburg, VA, and QUEST, owned by Cherry Blossom Farm, proved very competitive and was named Ladies’ Hunter Sidesaddle Champion and received the Grand Duchess Perpetual Trophy.  Reserve Champion was Cindy Buchanan of Coatesville, PA, who rode her own horse THE LONE SPY.

“It feels great!” said Zebrovious who has been riding QUEST for 12 years. “He is my long-time partner and he really enjoys it. This is the best he’s gone this year.”

In the $300 Ladies’ Sidesaddle Under Saddle class, the eight entries were judged on the walk, trot, and canter in each direction and then had to line up head-to-tail as the judges inspected each horse and rider to be sure they had the correct traditional ‘appointments’. Zebrovious and QUEST emerged the victors, while Lauren Zug of Elkton, MD, and her own KNIGHTHOOD took second place, followed by third placed Debra Taylor of Berwyn, PA, and her own horse HYPNOTIC.

There were three entries in the $300 Ladies’ Sidesaddle Over Fences class, where competitors had to jump a course of eight fences up to 3′ in height. All the riders had super rounds, and this time it was Taylor and HYPNOTIC that made their way into the winner’s circle. Zebrovious and QUEST took second, while Buchanan and THE LONE SPY finished third.

In the $300 Ladies’ Hunter Sidesaddle Hack, all six competitors had to walk, trot, and canter both ways of the ring and then individually jump two fences up to 3′ in height followed by a gallop down the long side the ring before halting. Buchanan and THE LONE SPY took the honors in this class, followed by second placed Zebrovious and QUEST, while Taylor and HYPNOTIC finished third.

The Pennsylvania National Horse Show (PNHS) is one of the largest indoor horse shows in the U.S., hosting horses and competitors from across the country with 20,000 spectators attending from the Mid-Atlantic region.With over 1,400 qualified horses competing for $485,000 in prize money, the show features national Hunter and Jumper competition and is the site of the Pessoa/USEF National Hunter Seat Medal Final, the Randolph College/USEF National Junior Jumper Championships, North American League (NAL) National Finals and the $85,000 Grand Prix de Penn National.In addition to world-class equestrian competition, the horse show offers a unique shopping experience with boutique vendors showcasing one-of-a-kind, equine inspired products including jewelry, fun fashion and accessories.