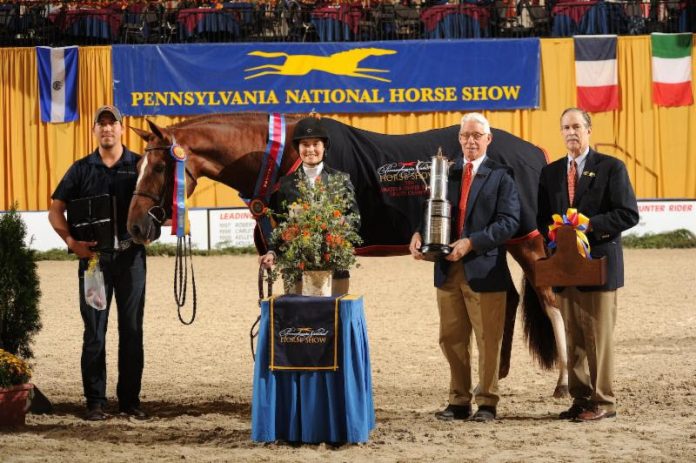 Harrisburg, PA – October 18, 2014 – The Amateur Owner riders were dressed to impress in their shadbelly coats at the Pennsylvania National Horse Show as riders sailed over the 3’6″ courses and vied for the prestigious championship titles.

“It’s so exciting!” said Danhakl with a smile. “I’m so happy and I don’t even know what to think. My horse was awesome and I’m so proud of him. I would have been happy just leaving with a Championship, so to get the Grand is just icing on the cake.”

John Ingram of Nashville, TN, and AIRPORT 48 owned by John and Stephanie Ingram, stepped into the winner’s circle after clinching the Amateur Owner 3’6″ 36 & Over Championship and the Carlos F. Bodwell Memorial Perpetual Trophy. The pair won the Handy class in the division, and his groom Aurelio Pacheco was awarded the Grooms Award. EMPIRE, owned by David Gochman and ridden by Becky Gochman of New York, NY, took Reserve Champion after winning the Formal Attire class in the division.

“It feels great,” said Ingram. “We bought him as an equitation horse and all I can say is that he’s really exceeded all of our expectations. He’s just great.”

MINDFUL, owned by Kensel LLC and ridden by Kelley Farmer, was awarded the EMO Agency Overall Hunter High Five Award, as the horse that earned the highest numerical score during the show, which was 95.0 points.