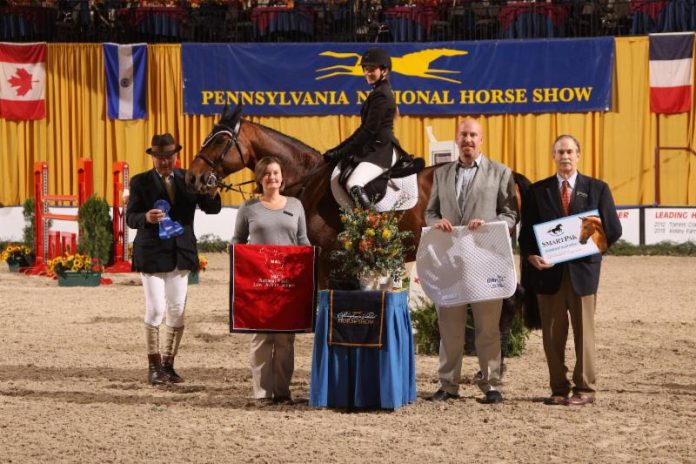 Harrisburg, PA – October 18, 2014 – Sheer Levitin of Delray Beach, FL, and her own NABUCO rode to victory in the $5,000 North American League Low Jr/AO Jumper Finals presented by UltrOZ at the Pennsylvania National Horse Show. It was an amazing accomplishment for the 13 year-old who only started riding four years ago.

It was a competitive field of 25 riders who attacked the 1.30m course designed by Michel Vaillancourt that included 12 jumps with 15 jumping efforts. Only eight riders made it through to the jump-off, which produced only three clear rounds. Levitin and NABUCO produced the fastest round, stopping the timers in 37.293 seconds to clinch the win and first place prize money of $1,500.00 as well as a new UltrOZ saddle pad, which was presented to her by Brian Collins, UltrOZ Division Manager.

“It’s an honor just to get a ribbon!” exclaimed Levitin. “I came here just thinking I was going for a nice clear round, and I really didn’t think I would make it but here I am!”

Levitin and NABUCO completed the year with a total of 1,964 points in the 2014 NAL Low Jr/AO Jumper Division Presented by UltrOZ, and she talked about her horse with a smile, “I got him about a year and a half ago and he was my children’s [division] horse, then we realized he could do the bigger stuff. My favorite part of the horse show is of course the winning and the jump-offs. They’re so fun with him!”

Anna Cardelfe of Spring Lake, NJ, and her own FIRENZE VAN DE CADZONDHOE produced two clear rounds in the competition, but had a slightly slower jump-off time of 38.695 seconds to finish in second place. The pair finished with a total of 992 points in the 2014 NAL Low Jr/AO Jumper Division.

The qualifying period for the NAL runs from September 1 through August 31 and anyone can compete in NAL qualifying classes. However, only current members are awarded points. Joining the NAL is the best way to ensure that you get the points necessary to make it to the finals and annual memberships are only $40 per rider.

For more information regarding the North American League series please call (717) 867-5643, email to NAL@Ryegate.com or visit www.ryegate.com. Follow us on Facebook atwww.facebook.com/NALFinals.

UltrOZ Elite is the only wearable therapeutic ultrasound system for the maintenance and rehabilitation of equine athletes. UltrOZ Elite represents the next generation in safe and convenient ultrasound therapy that owners and riders can apply themselves, taking clinical therapy out of the doctor’s office and into the barn.

Ultrasound therapy has been used by veterinarians for decades, and by changing the way ultrasound is delivered, UltrOZ has eliminated the risk of thermal damage and created a safe and easy tool that promotes healing in tendon and ligament injuries; splints; muscles strain and tear; fracture and bone chip repair; minor strains, bumps, bruises, and inflammation. UltrOZ Elite also provides pain relief and can be used on a daily basis for maintenance.

UlrOZ Elite has been field tested by veterinarians and equine therapists, and is now being used extensively on the elite horse show circuits, racetracks, and training facilities to help keep equine athletes at the top of their game. World-class riders like McLain Ward (show jumping), Steffen Peters (dressage) and Tim McQuay (reining) are among those whose horses have benefited from UltrOZ Elite.

Further information about UltrOz is available on line at www.UltrOZ.com.