“It was a banner year for Old Salem Farm and the spring season was true to form as an East Coast favorite among riders,” said Alan Bietsch, Manager of Old Salem Farm. “We are proud to have some of the most renowned equestrian athletes support the shows and this award is proof that our dedication to excellence in the hunter/jumper sport produced a fantastic year. We could not do what we do without loyal exhibitors, and we are grateful to both them and USHJA for the honor.”

The Member’s Choice Awards Program was developed by USHJA’s Competition Standards Committee to reward technically excellent and exhibitor-friendly event and encourage communication between exhibitors and management.

Ranked number 12 on the North American Riders Group Top 25 List in 2013, the Old Salem Farm Horse Spring Horse Shows call one of the nation’s premier equestrian facilities home in North Salem, New York. Known worldwide as host of Selection Trials for the Olympic Games, the American Gold Cup CSI 4* World Cup Qualifier, and the beloved Spring Horse Shows that kick off the season each May, the two-week series boasts over 130 hunter and jumper classes each week and nearly $500,000 in prize money.

After winning the approval of discriminating exhibitors, Old Salem Farm promises to impress yet again in 2015. With the continued support of dedicated riders, owners, trainers and spectators alike, the Old Salem Farm Spring Horse Shows will return in 2015 with the first week scheduled for May 5-10 and the second May 12-17, and the Old Salem Farm Spring Welcome Day is on Sunday, May 3. Welcoming equestrians stars including the likes of Olympic gold medalists Beezie Madden, McLain Ward, Leslie Howard and top riders like Georgina Bloomberg, Christine McCrea, and Darragh Kenny, Old Salem Farm Spring Horse Show offers the best show experience, while also delivering more than 50 divisions from lead-line to grand prix. 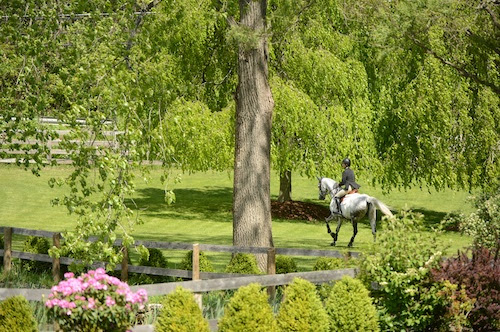 Old Salem Farm, located just one hour north of New York City, is one of the best equestrian competition venues in North America, as rated by the North American Riders Group in 2011, 2012 and 2013. Host of the Old Salem Farm Spring Horse Shows, the prestigious American Gold Cup CSI-W 4*, and year-round competitions, the facility offers a state-of-the-art turf grand prix field, indoor riding arena, and two all-weather footing rings. As a boarding and training facility, Old Salem Farm is second to none and home to top trainer Frank Madden. For more information, please visit www.oldsalemfarm.net or call 914-669-5610.

Every Horse Movie Currently Streaming To Get You Through Your Social...