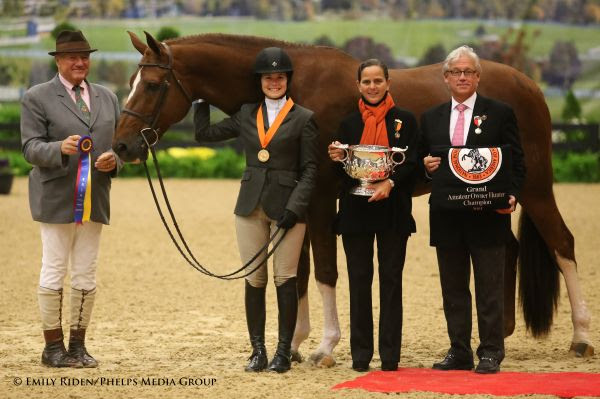 Lexington, KY – October 30, 2014 – Stephanie Danhakl and Golden Rule have racked up quite the list of accomplishments in just the past eight months, and on Friday afternoon at the National Horse Show they added another major one to their resume.

“I don’t even know what really to think,” Danhakl, of Pacific Palisades, California, said. “It’s just been a phenomenal Indoors for me. All of my horses have been amazing. This is just an incredible way to end.”

Danhakl also competed her mount Humor Me successfully in the Amateur-Owner Hunters, but it has been Golden Rule, or “Dreamy” as he is appropriately known in the barn, who has repeatedly gone to the top of the ranks with Danhakl, under the coaching of trainer Scott Stewart.

“[Scott] bought him off a video in January or February, and he started showing him in the High Performance and Second Year [Green Hunter] divisions,” Danhakl said of the 10-year-old Oldenburg gelding. “At the time, I wasn’t looking for a horse, but I got on him one day and just fell in love with him right away. We were able to convince my parents to buy him. We just clicked from day one. He’s just been such a blessing and has given me so much confidence in my riding and has been such an amazing horse for me.”

Beginning to train with Stewart, who found Golden Rule for Danhakl, was a switch that she only made about a year ago, but it is one that has been extremely beneficial as she works to balance her amateur riding career with completing her Master’s Degree in Art History at the University of Pennsylvania.

“Scott’s been an incredible trainer for me. I’ve improved 200 percent in the past year, since I’ve been riding with him,” Danhakl said. “I just trust him implicitly both in his ability to find horses that suit me really well and also just in the schooling ring. Each horse is different, and he really just knows each horse really well. He can give me tips on how to ride them best and to each of their abilities and strengths.”

In the Amateur-Owner 35 and Over Hunters, the trainer that Nicole Hiehle looks to is Russell Frey. His guidance is part of what helped Hiehle and her mount Lovely Charity clinch their division championship, sponsored by Suzanne Thoben Marquard, on Friday.

“Russell’s been unbelievable,” Hiehle said. “I’ve been so nervous this whole week, and he can look at the horse and tell what I need to do and tell me to make her to be her best.”

Hiehle’s nerves stemmed largely from the fact that the 2014 National Horse Show marked her first time competing on the indoor circuit since her junior riding days more than 20 years ago.

“I had a mare called Castle Rising in 1989 or ’90,” Hiehle said. “She got ribbons – seconds or thirds. I never have come close to this. This is a great way to come back to an Indoor show.”

Hiehle took a number of years off from the show ring and riding, but when she decided to return to the show ring Frey was her obvious choice as the trainer to get her there – he was the same trainer who coached her through her junior career.

“I was in Chicago a lot this summer [where Frey is based],” Hiehle said. “He did a lot to help me and to help me with her jumping. She’s just a great mare.”

Hiehle purchased Lovely Charity, a 10-year-old Oldenburg mare, last fall in Kentucky and has been thrilled with her since, particularly with her performances this week.

“She just gets better and better. She gives 100 hundred percent,” Danhakl said. “This ring is so amazing for her because she doesn’t spook, but she gets a little more alert which gives her just that little bit of extra spark to fire her over the jumps.”

Friday marked the conclusion of the Amateur-Owner Hunters, but it also kicked off the start of the Junior Hunter divisions, which will continue Saturday morning.

Watch live streaming of the National Horse Show all week on USEF Network atwww.usefnetwork.com, and find out more about the show at  www.nhs.org.

About the National Horse Show

With $755,000 in prize money offered, this year’s National Horse Show offers an International Open Jumpers with $460,000 in prize money, while the top rated hunter sections have a total purse of $195,000. Meanwhile, $100,000 in total is offered to the Amateur-Owner and U 25 Jumper sections.

For the fourth consecutive year, The National Horse Show received a top ranking from NARG, the North American Riders Group and was named the Show Hunter Hall of Fame Horse Show of the Year in four back-to-back years.

For more information go to:  www.nhs.org