By Brenda Mueller of ChicagoEquestrian.com

Roscoe, IL – July 12, 2015 – Riders in the $30,000 Tapestry Farm Grand Prix turned up the heat on the already steamy 86-degree day at Ledges Sporting Horses in Roscoe, IL. Nineteen riders gave the Anderson Lima (inset photo)) designed track a try to see who would be going home with the 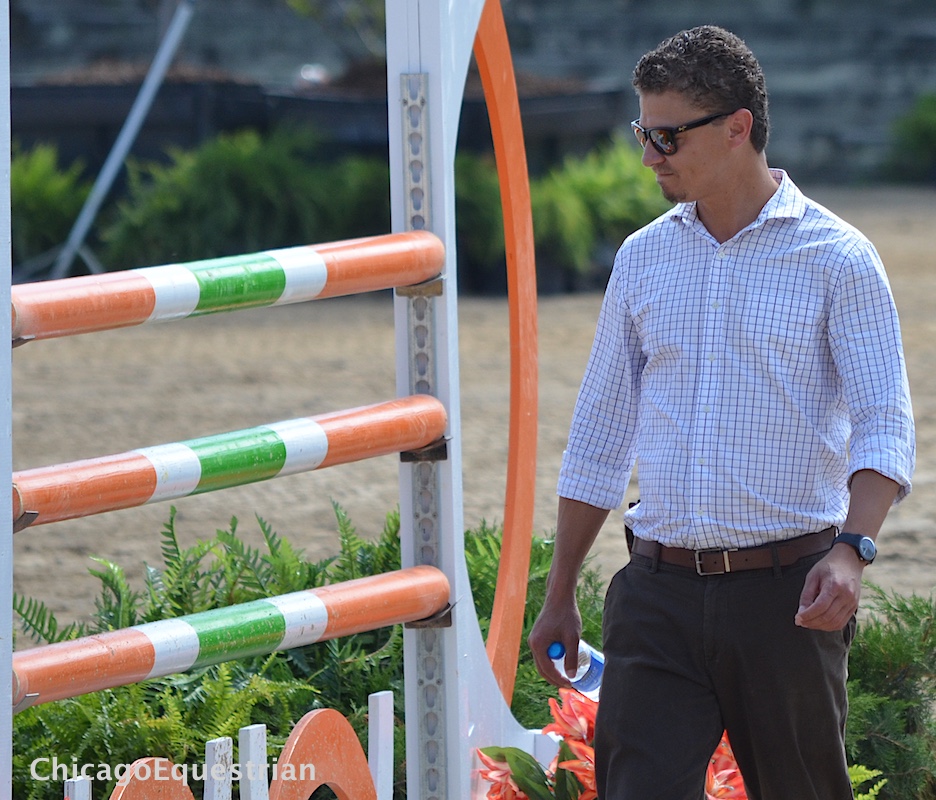 Eight horse and rider combinations managed to make a fault free effort where other riders had rails in the triple combination or the oxer, vertical in and out. Veteran Grand Prix rider Lisa Goldman, Hawthorn Woods, IL, had four rides out of the eight to return for the jump-off, Andrew Kocher had two clear and Steve Schaefer and Tiffany Hammack both had one shot for the top prize.

Goldman went first on Rocs to Riches, setting the pace with a clean round and 36.428 on the clock. Kocher rode Shalanno Farm’s Bologna to another clean round and a faster time of 35.270.

Faster and faster they went with Goldman returning on a hometown favorite, Morocco, turning in a fast time of 35.220 but caught a rail at the oxer at 7a for four faults.

Kocher, Lake St. Louis, MO, had another chance to block the top spots with his second ride, Cantori, owned by Aleece Jarmin. Galloping and cutting the turns tight, Kocher had the fastest time so far of 34.759 but caught the rail at 7a like Goldman for four faults, but still leading with Bologna.

Schaefer and his Caribe turned up the heat as they blazed around the track leaving a stride out in the first line and galloping through the turns to earn the lead with 33.981 and all the rails up.

Hammack of Richmond, IL, had her single shot at the blue with Cassie Burke’s Calisto Z. The pair put in a safe and tidy round to jump clean in 37.414.

“I’m just taking my time with him,” said Hammack. “It’s been a long time since I’ve competed at that level and we are still getting to know each other.  I was going for a neat, tidy clear. I did leave out a step in the first and last lines though, trying to make it up because he has a huge step.”

Goldman still had two rides to go to steal the lead from Schaefer. Her mount Aslan, owned by Southview Inc., made up the distance easily with his huge stride to catch Schaefer with 33.821, but unfortunately caught the rail at 7A and the Liverpool at jump 11 for eight faults.

With one chance left, Goldman rode the veteran Centurion B to a clean round but not quite fast enough to beat Schaefer with 34.337 for second.

Schaefer and the 13-year-old Caribe have a track record of Grand Prix and Welcome Stake victories. Schaefer bought the horse as a four year old after Norman Dello Joio helped pick him out while they were in Argentina. The pair had a successful time from the beginning during Caribe’s young jumper career, winning 1.30m classes in Wellington, FL as a six-year-old. Schaefer is known for his ability to ride fast and clean and is a familiar face at top Chicago events.

“This was his (Caribe’s) first time showing after some time off from an injury and he was really scopey and fresh,” added Schaefer. “I went to a hackamore today for the first time too so today was a lot of firsts but it all worked out.”

Even though Goldman competes in other parts of the country, she loves to be on her home turf in Chicago.  Including her six Grand Prix entries, Goldman brought 19 horses to the Ledges Show and remarked, “Pat (Boyle), Nicole (Boyle) and the whole staff make it so wonderful to horse show. We try to support the local shows as much as possible.”

Showplace Productions is giving professionals a way to show their young horses in some classes with no entry fees. Only the Young Jumper Championship class for each section has an entry fee, the regular classes are free.

Recent facility upgrades include all of the arenas outside as well as all of the bathrooms inside and a brand new kitchen with all new equipment with the best horse show home cooking around. It’s true, exhibitors praise the food and deem it the best in the country.

The Grand Prix ring has a new 100’ x 300’ schooling area with all new footing. The grand prix ring footing and drainage system are upgraded and new. The drainage on the entire property has been reworked and upgraded and footing in the hunter rings is also new.

Showplace Productions continues their reputation of top notch hospitality including weekend parties on the party deck with outdoor barbecues and music, just one of the many reasons to show in Chicago this summer.