Home Press Release Zone 8 Shined in Gold and Zone 7 Earns Medals of Every... 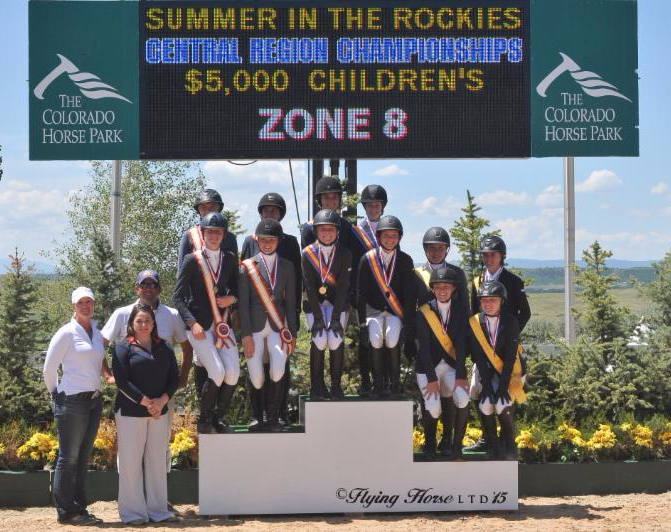 By Louise Bowden for USHJA

“I think for any rider just putting yourself in that kind of pressure situation makes you a better rider,” said Cyphert. “I say all the time, ‘you can’t rush experience, you just have to take it as you get it,’ and to give them an opportunity, or even several opportunities that week, to be a little nervous walking into the ring or having other [teammates] count on you, I think it was good for them.”

Riding into the final day of individual competition three and a half faults behind the leader, was Emily Allen of Dallas, TX, (Zone 7) aboard her own I-Mai Tai OHF, claiming silver. Bronze medalist Nicole Lyvere of Lakewood, CO, (Zone 8) also rode from behind on her own Tiggerr to earn the last medal up for grabs on just four and a half faults.

In addition to their medals, the winning teams and individuals in both the Adult Amateur and Children’s will receive Pro Performance open-front boots provided USHJA Contributing Sponsor Professional’s Choice. Also, the individual Children’s gold medalist receives a coveted spot in a 2016 USHJA Emerging Athletes Program Regional Training Session of their choice.

“Really I think it was a great experience,” said Cyphert. “I’ve been involved with Prix des States and Young Riders for a lot of years now, so it’s really nice to see that program extended to the [Child/Adult Amateur] division, and I thought it was a great experience for all the kids and the adults.” Cyphert continued, “It was just the right amount of serious but still a really good time for everybody. The horse show [Colorado Equestrian Partners] did a really good job with it.”

USHJA congratulates all of the riders who participated in the 2015 Children’s and Adult Amateur Jumper Central Regional Championships: