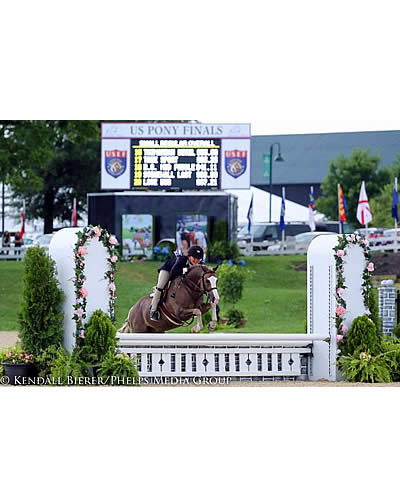 By Kendall Bierer and Elaine Wessel for Phelps Media Group

Lexington, KY – August 8, 2015 – Adding yet another impressive accolade to her now-growing collection, Augusta Iwasaki of Calabasas, California and her family-owned pony Bit of Laughter earned an additional reason to celebrate Saturday afternoon at U.S. Pony Finals, contributing more excitement to an already exceptionally successful week. With their score of 1,033.290 points, the pair grossed the highest marks of any Regular pony between the three size-based divisions to clinch the title of Grand Regular Hunter Pony Champion.

“I am very excited. It is like a dream. It is nothing that I could ever imagine. This is the first time that I have been Grand in the Greens and the Regulars, I don’t think I would be able to duplicate this,” Iwasaki said excitedly.

Bit of Laughter, called ‘Ceto’ or ‘Texas’ outside the show ring, wasn’t always the textbook example of the hunter he is today; he challenged the young rider at the onset of their career together. The champion team has been paired up since last year’s Winter Equestrian Festival (WEF) after Bit of Laughter was sent to the family by Peter Pletcher, the renowned hunter rider out of PJP Farm in Magnolia, Texas.

“In the beginning he was really difficult, but now he is just the image of perfection. He didn’t want to participate in the beginning, but then he realized that he could participate and could have fun,” Iwasaki reflected. “I think it is his personality, on the ground and over fences, that makes him stand out. On the ground he can be a little funky. Over the jumps it feels like he is always having fun.”

Iwasaki has grown up with both horses and her family by her side. Still a family affair, her parents, Chris Iwasaki and Elizabeth Reilly, own many of the ponies with which she competes.

“I was 4 years old [when I started riding], and my mom was riding and teaching. She took me to a barn, and I rode for a little while and really liked it. One day I decided that I didn’t want to ride anymore, but then a week later I was like, ‘Mom why aren’t you taking me to riding?'” Iwasaki commented. “I tried dance once. It was a no, a big no [laughs].”

At only 11 years old, the small rider, who has been in the saddle for nearly seven years now, has already proven to have supersized talent and perhaps even greater ambition. With no plans of slowing down, Iwasaki hopes to soon move up the ranks into the realm of horse competition, adding a bit of height to both the jumps and the animals beneath her. She currently has two horses in her repertoire, which she competes in the Junior 3’3″ Hunters, although she has hopes of potentially competing in 3’6″ hunter derbies next year.

In the second position behind Iwasaki and Bit of Laughter, Taylor St. Jacques and Glenhafan Red Kestral, owned by Peacock Ridge LLC out of Greenwich, Connecticut, garnered the Grand Regular Hunter Pony Reserve Championship with their score of 1,025.390 points, only a few points behind the winning pair.

Topping 154 other ponies in Friday’s under saddle portion of the Medium Regular Hunter Pony division, Alexa Aureliano and Woodlands Stevie Ray had secured a solid position for themselves headed into the second day of competition, which would test them over fences. Sitting 10th in the standings, the pair still had to make up ground, though, to have a shot at the championship, which they successfully did with their over fences marks of 253.120 points, pushing them into the lead spot. Still with nine trips to go, Aureliano and her pony played the waiting game, but their overall score of 1,000.340 points proved unbeatable, capturing the champion tricolor as the only entrant tobreak the 1,000-point threshold in the largest division of the week.

“This is my fourth year at Pony Finals, and this is my first champion ribbon. It feels amazing. It really does,” Aureliano smiled.

‘Stevie,’ as the pony is called in the barn, is owned by Hannah Bernstein of New York but has been ridden by Aureliano for nearly two years. Although the duo showcased their winning ways in the ring Saturday, it wasn’t always that way.

problems getting to know each other, but then we definitely got over them in the summer,” the 13-year-old first-time champion from Long Island, New York, reflected. “His personality is amazing, he loves to be around people and loves to have attention. He’s just like a teddy bear.”

Reserve honors went to Devin Seek aboard Heaven’s Sake, owned by Bibby Hill of Reddick, Florida. The pair rode to a total of 992.070 points to secure the next-best spot behind Aureliano and Woodlands Stevie Ray, but the true comeback story came in the version of the third place winner, Mia Wayne and her own pony Oliver Twist. As the 103rd entry to take their turn around the ring, the pair laid down a stellar round to the tune of 255.260 points from the judges, the highest marks of the day with 52 entries still to ride. The score would stand for the remainder of the class, earning them the blue ribbon in the over fences portion of the division and bumping them from 53rd to third place overall. Wayne was also awarded the High Point Owner and Rider Award for her performance.

It takes a special bond between horse and rider to be able to win a national championship. For Elizabeth McDougald of Lawton, Oklahoma, her relationship with her pony Knock My Sox Off exceeds all limitations. The 17-year-old rider from Zone 7/8 has owned her Pony of the Americas since he was a 2-year-old, both breaking and training him herself to achieve a life long dream, winning the U.S. Pony Final Individual Pony Jumper Championship title.

“That was amazing,” McDougald expressed with a smile stretching from ear to ear. “I was not expecting to go in there and do that well-it made my day.”

Competing for three years in the pony jumpers, McDougald has never stood atop the pinnacle of the podium. In 2013, an injury knocked the duo out of the Individual Championship, but the timing of their win Saturday could not have come at a more perfect time.

“This is my best result, and it is definitely a dream come true,” she said. “I have always competed on him and we have never done that well. I am 18, showing in my 17-year-old year, so this is our last time competing in the U.S. Pony Finals.”

The competition featured 15 qualified riders, who rode to the top results during the three phases of competition over the two previous show days. McDougald rode “Sox” to three consistent clear rounds, returning at the top of the order, tied with Stephanie Don and Joel, owned by Avery Kim of South Pasadena, California, with zero faults.

During the first round, Don nicked a rail for a four-fault score. The pressure was on McDougald and Sox; however, the pair had their first unlucky rail of the week, guaranteeing a jump-off for the Individual Gold.

Don returned for the short course, zipping through the obstacles with dexterity and speed. However, as they crossed the final oxer, Joel’s back leg rubbed the back rail, incurring the four faults that would leave the door open for McDougald to make her move-she jumped at the opportunity.

“I was thinking go clear, because I knew that was what would get me to where I needed to be,” McDougald explained of her plan.

Her growls could be heard across the Alltech Arena as she urged Sox through the serpentine. As the pair landed from the final oxer with all rails in place, cheers erupted. Only two strides from landing, McDougald hugged her pony, and tears began filling her eyes as the shock of winning settled on her.

McDougald began working with Sox as a 2-year-old, after receiving him from a family friend, and broke him herself when he turned 3 years old. Now, at age 10, she and the gelding have a bond that is unbreakable.

“He is extremely sassy and nosy,” McDougald laughed. “He is Mr. Personality. I learned to growl at him while training him. He listens to me, and it works. This is my last year showing him here, but he is so special, and he has a forever home with me.”

Don was awarded the silver medal for her four-fault jump-off score with Joel, while Sarah Davis and National Treasure captured the bronze.

“He is really feisty and loves jumping,” Don said of Joel, who was recently imported from Europe. “I have only been riding him for about five months, and we have been doing the 1.30m at home. Although these jumps are smaller, it is still difficult. This ring is a little smaller, too.”

For Don, the U.S. Pony Finals were all about having a good time and getting experience under her belt with her new horse.

“For the jump-off, we planned to go clear and make the tightest turns possible, as well as have a good time,” Don said. “This was worth the journey. All of the competitors are super nice and inviting. With all of them there is kind of like a giant team instead of just individual zones competing.”

A second jump-off determined the final rankings of the top six competitors, with four riders tied with 16 cumulative points. Davis posted a clear jump-off ride for the third place finish with her own National Treasure, while Wisconsin’s Maya Lovdal and Miracles Happen took the fourth place as the fastest of the four-faulters, breaking the beam in 44.127 seconds. Hallie Rush of Tennessee aboard Sky Miles followed close behind in the fifth place on four faults, posted in 49.12 seconds. Bailey Doloff, of Maryland, and Wishlea Star Dasher rounded out the top six with a concluding eight faults.

While Saturday marked the conclusion of the Pony Hunter and Pony Jumpers, USEF Pony Finals competition continues with the Pony Medal Finals tomorrow beginning at 7 a.m. in the Alltech Arena.