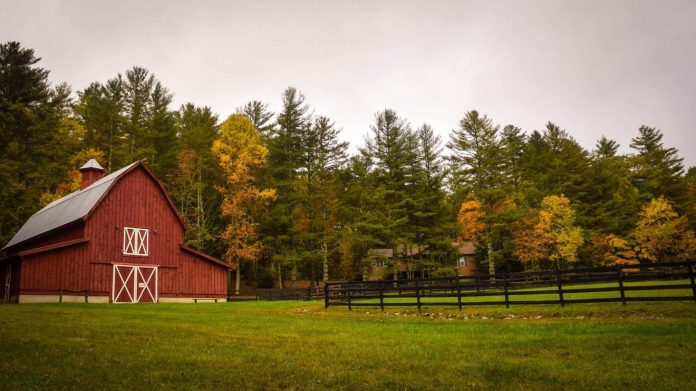 It’s now January 2016, and I’m sitting in the half-renovated kitchen of a haunted, run-down farmhouse, exhausted, cold, alone (but for my dog, and the faint scratchings of what are likely rodents in the walls), genuinely stoked for the year ahead, reflecting on everything that’s happened these past several months.

I have learned to wield chainsaws and high-tech weed-eaters with some degree of mastery. I have hacked mutantly huge poison ivy vines and dug things out of the garden that have both puzzled and terrified me. I have sanded, primed, coated, demo’d, DIY’d, put back up again. I have no doubt ingested several types of mold, bacterium and insect, and felt secretly proud about it.

I have witnessed the wide-eyed stares of contractors, clerks and delivery persons when they discover that I’m 31, single, and plan to manage these 56 acres, farmhouse and barns myself (with the help of good friends and family whenever I can scrounge it, of course). I don’t blame them for thinking I’m crazy; you’d have to be crazy to want to take on (let alone live in) a house described as a tear-down by the real-estate agents, its floors so slanted furniture literally can’t stand in certain places. I’ve definitely doubted my own sanity on more than a few recent occasions—but if there’s anything I’ve learned from living in the horse world, it’s that hard work mixed with a little craziness sometimes pays off.

Because I’ve also learned that there’s always going to be someone with more money, nicer horses, better qualifications, less stress, more free time than you. And when there’s a limit to your budget, there’s just never going to be perfect, never a scenario in your price range that doesn’t require you to shell out near-sacrificial levels of tears, sweat and blood. There will always be a million reasons why you shouldn’t (including the fact that several professionals whom you greatly admire will warn you, repeatedly, to do anything, anything, anything else: this way ahead lies mostly heartbreak and exhaustion, dotted only occasionally by fleeting moments of utmost happiness). But that after years of failed attempts and odd jobs and false starts, when you get down on that level of wanting something badly enough, you’ll feel simultaneously nauseated and exhilarated by the prospect of just going for it.

I’ve wondered if, in a year, I’ll regret taking this leap, choosing horses over writing, a farm over an apartment, a lifestyle over a job. How many books I’ll still be able to read between mucking stalls, putting up fence, clearing literal tons of brush, starting a business. Whether my dreams of hosting a book club for boarders and the occasional writers workshop will ever come to fruition (and help me feel less like I’ve abandoned my degrees). Whether I should dream now or wait to find out whether, in a year, I still have energy left for dreaming.

I have remembered that after college, while working at a publishing house in London, I paid £50 (about $100 US at the time, and not at all in my budget) to go riding for an hour in Hyde Park. That despite the fact that my first pony threw me off every single time I rode her, I cried every day for a month when we gave her to an older, more experienced rider. That this summer I was so thrilled when my OTTB grasped shoulder-in in two consecutive sessions I instantly forgave her multitude of previous sins (emphasis on multitude). That I’ve recognized this same fortitude in other horse people—loving a pursuit completely, despite ridiculous odds—and found it a solace even when nothing else was.

I’ve tried to anticipate how things will look, where they should go, what’ll be the most economical, what I need to get for tomorrow, what I should start in progress now so that it’ll be ready next year. I’ve wondered if I’ve gone overboard, too deep, not far enough, asked too much, what other people think. But more and more I’m finding that when I start to feel overwhelmed, it’s within my power to say screw it, stop over-analyzing, one foot in front of the other, just go for it. Even something as simple as hanging a bucket is a step in the right direction, and over time I know those small steps will add up.

I’ve noticed there’s a quietness here in the mornings that I’ve never experienced anywhere else, a quietness that I know it isn’t going to last. When I’m finally ready for horses in about a week, a lifetime of busy mornings kicks off. I hope it’ll be what I need. I can say with certainty it’s never going to be easy. But seeing my mare’s face over her own stall door is the visual that, for a while now, has kept me going.

I could not be more terrified—or excited.

Abby Gibbon is a writer and rider based in Mount Airy, Maryland. For more on her adventures as a new farm owner, you can follow her Fine Idea Farm on Facebook and Instagram.

I Have the Wrong Horse: Now What?