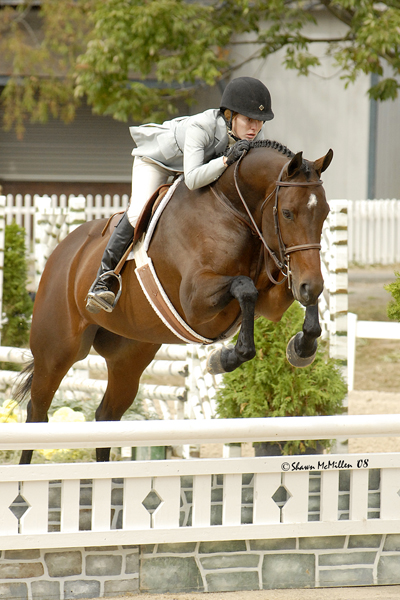 For horse racing enthusiasts, Stephanie “Stevie” McCarron Wigley’s maiden name holds significant weight and star power. Her dad is Hall of Fame Jockey, Chris McCarron. But though she grew up exposed to the world of racing, Wigley never really had an interest in making any part of horse racing her career, much to her dad’s relief, as he knew firsthand how dangerous “The Sport of Kings” can be, and did not really want his daughter to follow in his footsteps.

Wigley stressed, “[My parents] were always very supportive of my riding and me wanting to pursue that.”

She grew up in California and spent the majority of her junior (and beginning of her pro) career there, but Wigley now operates her own Cloud Nine Farm in Midway, Ky., where she and her students attend local Kentucky Hunter Jumper Association shows, Zone 4 and 5 competitions, as well as competitions at the Kentucky Horse Park.

She started riding at the age of 4 and competing as an 8 or 9-year-old when she got her first medium pony named Buckley. Bought out of a field, he was not a fancy pony, but Wrigley called him “a teacher…the ultimate, ultimate teacher.” The pair was very successful, winning practically every over-fences classes they entered in Wrigley’s home state of California.

Like all ponies, Buckley was extremely smart yet unpredictable, and had a penchant for bucking. Wigley recalls being bucked off on a consistent basis. After the bucking became a regular stunt, Wigley’s dad got word of what was happening, attended a lesson, wanted to figure Buckley out. Wigley remembers her dad getting in the saddle wearing cut-off shorts. But even McCarron fell victim to Buckley’s antics; though, for the record, he did land on his feet.

Buckley went on to teach not only Wigley and her sisters, but numerous other riders in the California area where Wrigley grew up. When they graduated from him, they sold him to another family in their area, who did very well with the buckskin pony.

Although Wigley loved horse showing, she admitted, “I really wasn’t necessarily all that interested in equitation.”

Under professional Chance Arakelan, Wigley, then 16, focused on the jumpers. “Once I started doing the jumpers after doing the hunters and some equitation when I was younger, I just loved it—learning to ride jumps differently, and going fast to try to win. That really brought out my competitive edge that I would definitely say I got from my dad.”

After a year with Arakelan, she moved to Karen Healey Stables. “Karen was the “Queen of Equitation on the West Coast,” according to Wigley.

It was Healey that convinced Wigley to give equitation a real try. “Her advice to me was that if I really wanted to learn how to ride, the best that I could ride, I needed to do the equitation classes,” recalled Wigley. So, throughout that time, the McCarrons leased some equitation horses that allowed her to qualify for most of her medal finals early on in the season. They went on to lease a horse just for the winter circuit at Indio (now Thermal). At the same time, Wigley also focused on her junior jumper to try to qualify for Young Riders and the Zone 10 Team Finals at Harrisburg. As finals loomed closer, she found a horse to lease to ride just in the indoor finals season.

But nearing the end of that season, Wigley admitted that she hit some psychological bumps in the road.

“I really didn’t realize that it took more than just talent and ability. It really took heart, effort, and focus. It was such a huge learning experience for me.”

The turning point came when Wigley showed in the West Coast USET Finals in 1997; George Morris and Anne Kurskinski were judges. As she tells it, she was overwhelmed. Her horse had recently been imported from Europe and was green to the equitation rings.

“I think I let her inexperience take over, and I sort of set myself up to fail,” Wigley remembered.

Combining that element with the added pressure of showing in front of Morris and Kursinski, Wigley psyched herself out before the competition, and had the first rail down. At that point, placing in the ribbons was not an option, but she refocused, rallied, and put in a fantastic round the rest of the course. Taking in that experience before indoor finals, Wigley said, “That was a big wake-up call. I had this epiphany that there are so many riders around me that might not have the same opportunities that I had—my parents supported me and paid for me to show a very nice horse. I got to train with the best trainers in the country. If they wanted it more than I wanted it…they were going to do better than me.”

That year, however, Wigley finished in eighth place in the Maclay Finals and won team silver jumpers with her Zone 10 team at the Prix de States in Harrisburg.

That mishap at the USET Finals made Wigley work even harder, and she was glad to have that humbling experience before she made the decision to turn pro in 1998. While riding came naturally to Wigley, she realized that if she really wanted to compete and win at the top level, she needed to work extra hard to make it in the industry.

When she did go pro, Wigley worked for Barbara Ellison at Wild Turkey Farm in Northern California, where she got the opportunity to compete in grand prixes (even World Cup qualifiers) on the West Coast, but the Olympics were never on her radar. “I was somewhat realistic in knowing what it really was going to take to show in the Olympics. I was never really going to have the funds unless I had some sponsors to get a horse that could compete at the Olympic level. I wanted to stay realistic and be very competitive and win at the local Grand Prix level, and maybe do some World Cup Finals here and there,” she said.

Wigley has taken this mantra with her as she moves forward professionally; one that she picked up along the way. “Always be honest. In a sport where so much emphasis is put on ribbons, placings, constant showing, etc. many trainers get swept up and turn to unethical methods, forgetting about the horse’s well-being and the true education of the rider.”

For Wigley, it’s all about the horses, “Horses owned by my clients—I almost always treat them like they are my own. Horses are always the priority, as I would be nothing without them. They are how I make a living, they are my livelihood, my passion. They have been my life as long as I can remember. At the end of the day, it really is all about them.”

While Wigley’s biggest accomplishments as a rider seem to be stellar results during her last year as a junior as well as winning World Cup Qualifier events, when asked what her greatest accomplishment was as a trainer, she is most proud now of her students. “I really try to get inside of my students’ minds, set them up to accomplish their goals, and help build their confidence.”

Wigley has many students who are adult amateurs without many years of riding experience. To her, it is rewarding to see them reach a goal, even more so than winning at Indoors or racking up ribbons show after show.

“I love the mental side of teaching. I love getting into my students’ heads and figuring out how their brains work; how hard I need to push them, or pull back and be more gentle; hold their hand a little bit and simplify things; or maybe I need to be super tough on them. I feel that every student needs to be taught differently.”

Wigley’s method of teaching is to simplify and break down what type of ride works, what the horse is thinking when we ask them to perform a task, and how to make your decision from that. It’s important to her that her students have the fundamentals, more so than seeing them jump bigger jumps.