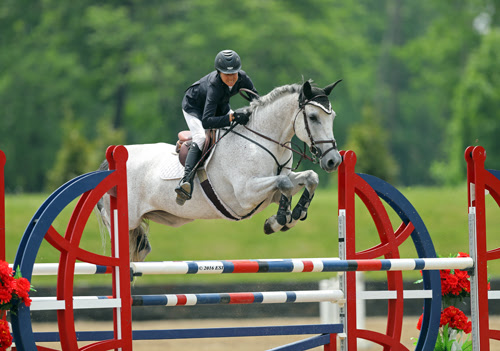 Saugerties, NY (May 28, 2016): The weekend sounded off with a bang at HITS-on-the-Hudson I, and there was no shortage of excitement in the $25,000 SmartPak Grand Prix.

Four horses and riders returned to test the jump-off course, designed by Marina Azevedo of Campinas, Brazil, inFriday’s class. It was once again Neshanic Station, New Jersey, equestrian Laura Chapot and her mount Thornhill Kate, who swept the field to garner their second blue ribbon this week after a $10,000 Brook Ledge Open Welcome win.

“I always enjoy coming to HITS Saugerties to see what’s new and improved,” said Chapot after her victory. “The course designer did an excellent job; it was a mixed field with great horses, some youngsters and also very good riders. There were challenges in all parts of the course, and there wasn’t one specific area that came down for everyone.”

The first to return to the jump-off were the winners themselves, Chapot and Thornhill Kate, co-owned by Mary Chapot. They started off on a gallop, moving efficiently through the shortened course—Chapot made the decision to cut between a combination to the last fence, which shaved crucial seconds off the clock. They passed the timers fault-free in 42.199 for the eventual win.

“My mare is very fast naturally, so I want to keep her as level-headed throughout the course as I can, while keeping her on a steady rhythm,” said Chapot of Thornhill Kate.

Leslie Burr Howard, of Darien, Connecticut, and Up and Blue Chappelle, owned by Peter Howard, followed Chapot. A rail at the mid-course combination kept them from the lead with a time of 46.722, ultimately placing them fourth for their efforts.

Next to contend was Christine McCrea, of East Windsor, Connecticut, and Wannick WH, owned by Candy Tribble & Windsor Show Stables, Inc. McCrea came in third in Wednesday’s Brook Ledge, and was hungry for the blue ribbon. She and the gallant bay stallion powered through the course, opting for the outside track around the combination to the last fence. They clocked in clear at 43.461, which would capture second-place.

The final rider with the chance to take the lead was Chelsea Moss of Medford, New Jersey aboard Calida, owned by Stormfront Stables, LLC. Moss and Calida crossed the timers without fault in 46.350, just enough to edge out Howard and claim the third-place prize.