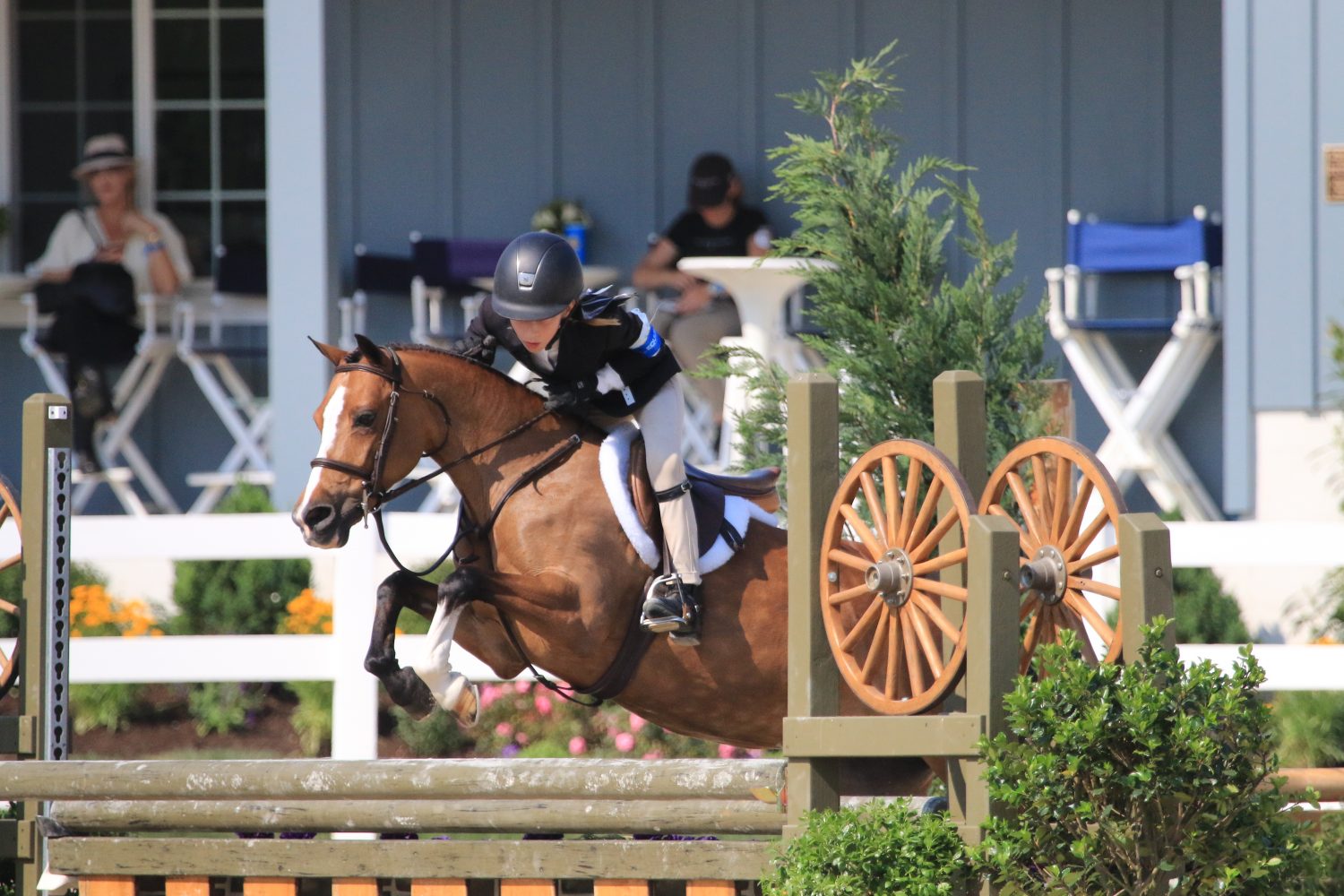 “She is everything to me” was the first thing Tessa Downey said when asked what doing so well at Devon meant to her. Two years ago, you might never have thought they would be jogging in the ring first at Devon. Downey got Bringing Home Blue (“Tinker”) for Christmas 2013, and the pair started out in crossrails at local shows. A little over two years later, Downey and Tinker had not only moved up to the Small Pony Hunters but had jumped to over 25 championships. Going into Devon, the pair sat in the 5th spot in Devon qualifying lists. Additionally, they currently rank not only first in the nation in the Small Pony Hunters, but sat atop the Grand Horse of the Year standings for the Pony Hunters. Downey reported that Tinker had been to Brandywine before, and she isn’t a spooky pony, so she wasn’t as nervous going in as she was excited. The feeling was mutual: “She seemed excited to be there! She would start trotting towards the ring before I could swing my leg over her.” Despite being a Devon first-timer, Downey said that her general lack of nerves carried forward, with a little more intensity. Her characteristically cool state of mind helped her score an 85 in the first round of the Small Pony Hunters, which placed her first over fences and ended up getting moved down to the second position to Love Me Tender after conformation judging. After her stellar performance in round one, Downey said that she “did think about the pressure, but as soon as I got into the ring, I started concentrating on my round again. After that, I didn’t think about the pressure again. I don’t get super nervous very much. Sometimes, but not always.”

Saturday morning was handy day for the Pony Hunter Division, and Downey and trainer Peter Pletcher had a plan. They were up early to walk the course and went over every fence and turn. Aside from one turn inside a plant after jump one (Downey thought it better to stay safe while on course) she executed the plan to a tee. Pletcher said he was very happy with how she rode. Her ride paid off, earning an 86 for another second place finish in the division. Downey then suited up in her shadbelly for the Small Pony Hunter Stake. After a slight rub at the first jump, the pair finished flawlessly for 4th place.

Downey and Tinker finished up Devon 2016 with a tour around for the Pony Hunt Teams as part of the “What a Choice” Team. Despite the cheering fans, screaming kids, and elaborate costume, Downey said that Tinker maintained her perfect attitude for a spectacular finish. Looking back, Downey said that she was “so happy that she got to show everyone what Tinker can really do” (and one would argue what Tessa can do too!) Through Horses, My Daughters Became My Best Friends