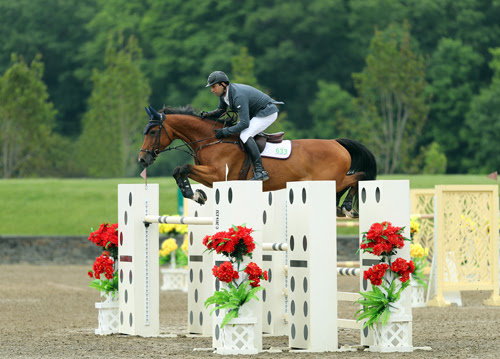 Saugerties, NY (June 4, 2016): As the second weekend of elite show jumping competition continued at HITS-on-the-Hudson II, riders and horses descended upon the Grand Prix Stadium to try their luck in the $25,000 SmartPak Grand Prix.

Oscar Soberon of Monterrey, Mexico, designed a challenging course comprised of many roll-back turns, a triple bar, and combinations that tested the navigational skill of each horse and rider for Friday’s Grand Prix. The team to ace that test proved to be Pablo Mejia riding out of Frenchtown, New Jersey, and Reglisse Top, taking home the winner’s share of the prize purse.

“It feels very good to win,” said Mejia after his victory. “When I initially walked the course, I did not think it was going to be as tough as it proved to be; as I watched other riders go, I realized it was not that easy—I was lucky.”

After ten trips, a fault-free score had yet to be seen and the crowd was in anticipation of a clear round. Matthew Williams of Fort Lauderdale, Florida, came close, piloting Zephyr, owned by Wyndmont, Inc. through the timers in 78.638 with four faults, ultimately earning fifth-place for their efforts,

Warren, Vermont, equestrian Cormac Hanley also put down a valiant ride with a four-fault round in 78.233 with Captain Caruso, just fractions of a second ahead of Williams for fourth.

The first clear round did not come until the eleventh trip, with Mattias Tromp of North Salem, New York, aboard Triomphe Z owned by Beyaert Farm, Inc, proving the course could indeed be conquered.

The next challenger to advance through the first round belonged to the victors themselves, Mejia and Reglisse Top, giving the crowd a certain jump-off.

Tromp returned as the last in the first round order aboard his third mount in the class, Avon, owned by Beyaert Farm, Inc. They put down a speedy round as they stopped the clock in 72.856, but an unfortunate rail would keep them out of the jump-off. They would ultimately take home third-place with a full six-second lead ahead of the other four-fault rounds.

It was down to the wire with only two in the jump-off as Mejia and Tromp went head-to-head for the chance to claim the top spot on the leaderboard. Tromp returned to test the shortened course first aboard Triomphe Z. They zipped through the course clocking in at 41.032, but with an eight-fault score after a rail at a mid-course vertical and again at the second fence of the combination—he would take home two spots in the top five with second- and third-place.

“After I watched [Mattias] before me and he had two down, I knew what I had to do to win,” said Mejia of his jump-off plan. “I just needed to be clear, so we decided to take it slow—my mare is very talented, we had a good day today.”

Mejia and Reglisse Top executed that plan, leaving all the rails up and clocking in with a careful 47.133 to seal their place at the top of the leaderboard.