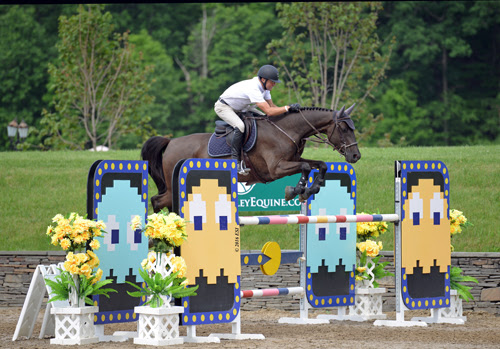 (C) ESI Photography
Jeffery Welles and Calais on their way to a $15,000 KindredBio Jumper Prix.

Saugerties, NY (June 5, 2016): Thirty-five horses and riders took the stage in Grand Prix Stadium at HITS-on-the-Hudson II to take their chance at the money in the $15,000 KindredBio Open Jumper Prix.

Ten conquered the course designed by Oscar Soberon of Monterrey, Mexico, to advance to the immediate jump-off, but it was Jeffery Welles of Wellington, Florida, to emerge victorious with Calais, owned by Sharon Gunthel and Triton Ventures.

First to go clear was Karyn Foley of Wilton, Connecticut, riding Falco. They stopped the clock fault-free in 42.040, which would ultimately earn them the fourth-place prize.

Welles moved into the jump-off with his first of two rides in the class, Freestyle 3, owned by Juan Bancalari. A rail at the second element of the combination would keep them out of the top five, but their time of 36.612 would earn Welles his second ribbon of the class with sixth-place.

Fairfield, Connecticut, equestrian Coco Fath challenged the shortened course next aboard Huckleberry, owned by Hillside Farm, LLC. They put down a speedy and efficient trip as they passed the timers in 38.111, eventually garnering third-place for their efforts.

Anne Kursinski of Frenchtown, New Jersey, claimed the next double-clear round with Caspar’s Lasino, owned by Market Street, Inc. They blazed through the timers in 34.941, a speedy time that would be a challenge to beat.

Following Kursinski was Addison Gierkink of Harpswell, Maine, piloting S&L Slingback, owned by Kadley Holdings, LLC. A lead seemed to be on the horizon as they powered through the course, but a heartbreaking rail at the last fence would put them in fifth with a time of 35.788.

Welles entered the jump-off again, this time with Calais, owned by Sharon Gunthel & Triton Ventures. They put down a blazing fast round, and as the seconds ran down, stopped the clock just a fraction ahead of Kursinski in 34.821, a time that would remain undefeated.

Amanda Flint followed with the last chance to take the lead away but earned eight faults as she crossed the timers, sealing the win for Welles.