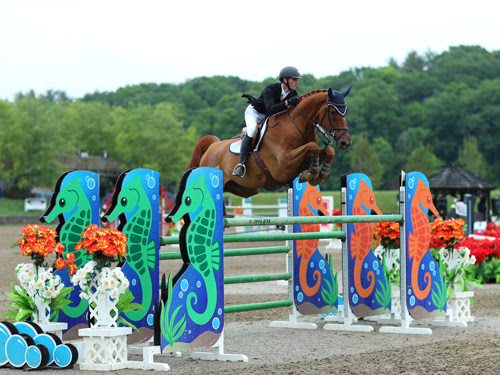 Saugerties, NY (June 6, 2016): The $75,000 Horseware Ireland Grand Prix served as the grand finale of HITS-on-the-Hudson II, closing out the weekend with an exciting opportunity for riders to snag a piece of the week’s largest prize purse.

Michael Hughes of Allendale, New Jersey, and Sans Soucis Z, owned by Caroline Lloyd, proved to be the team to beat.

HITS has witnessed Hughes develop from a past champion in pony jumpers and children’s jumpers at the Marshall & Sterling Finals, to the world-class Grand Prix rider that he is today—a testament to the unique grass roots program’s dedication to providing competition for up-and-coming equestrians.

“This is my third class with her, so I’m very happy with the win,” said Hughes of Sans Soucis Z. ” I’d like to thank Caroline Lloyd, Missy Clark and John Brennan for letting me ride this amazing horse.”

Five returned to the ring to challenge the course set by course designer Oscar Soberon of Monterrey, Mexico. Hughes was first to return to the jump-off. He and Sans Soucis Z put down a speedy, clear round as they crossed the finish in 43.155, which set the pace for the rest of the field.

“The course wasn’t too big, it was a long track that was spread out, so it required a fit horse,” said Hughes. “There was a difficult line on the far side and the course was laid out to ride slower; my plan for the jump-off was to ride a nice, smooth round and go double clear.”

Warren, Vermont, equestrian Cormac Hanley re-entered the ring next to contend the shortened course aboard Captain Caruso. They clocked in at 44.609, but two unfortunate rails kept them out of the contingency for the win. Their score would ultimately earn them the final spot in the top five with fifth-place.

Next was Matthew Williams of Fort Lauderdale, Florida, and Zephyr, owned by Wyndmont, Inc. After several finishes in the ribbons this season at HITS-on-the-Hudson, Williams was hungry for a win. The clock ticked by as they powered through the course, but a heart-breaking rail at the last fence would eventually earn them fourth-place with a time of 44.953.

Following Williams was Peter Leone of Greenwich, Connecticut, piloting Wayfarer, owned by Lionshare Farm. Their clear round and time of 44.102 was not quite quick enough to catch Hughes, but did land them third-place for their efforts.

Torano took to the course as the last trip of the jump-off. He piloted Daydream, co-owned with Danielle Torano, through the course galloping at every chance to save time. The crowd cheered as he powered toward the finish and sailed over the last fence fault-free, stopping the clock at 43.188, just three one-hundredths of a second shy of the lead as they settled for the second-place prize.