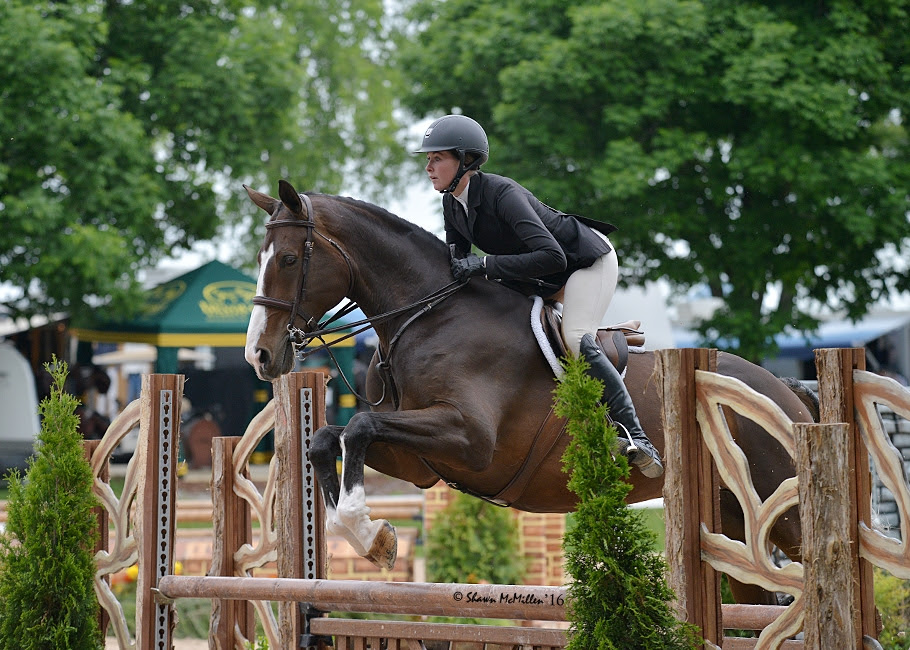 PRESS RELEASE
Annville, PA – June 9, 2016 – With the summer season upon us, the highly competitive North American League (NAL) is seeing some riders gain in the division rankings. Riders were busy chasing valuable points on the competition circuit during the month of May with their sights set on their ultimate goal-a chance to compete at this year’s NAL Finals.
The NAL qualifying season runs from September 1 through August 31. NAL qualifying classes are open to all competitors but only current members are awarded points. By joining the NAL, riders can accumulate the points necessary to make it to the National Finals at the Pennsylvania National Horse Show in Harrisburg, PA, October 13-22, and the West Coast Finals at the Las Vegas National Horse Show, in Las Vegas, NV, November 15-20. Annual memberships are only $40 per rider.
As of June 3, Olivia Lawton, of Burr Ridge, IL and Cassandra Dreams have extended their lead by nearly three thousand points in the Adult Jumper Division Presented by SmartPak. They now lead with a total of 6,810 points. Lindsey Tomeu, of Wellington, FL and Bonapart have maintained second placewith a total of 3,899 points while Dean Dignelli of Katonah, NY, and Redefin, are status quo in third place with 3,482 total points.
Caitlyn Epperson of Houston, TX and Au Girl have added a few points over the past month to extend their lead in the West Coast Adult Jumper Division Presented by SmartPak, with a new total of 2,194 points. Emily Straw of Overland Park, KS, and Filibuster continue to hold second place with 1,365 points while Anna Binder of Austin, TX, and Waranio hold third with 1,286 points.
Phoebe Alwine of Delray Beach, FL and Zenith Dance added over three hundred points in the last month to maintain their lead in the Children’s Jumper Division Presented by EquiFit with a total of 5,305 points. Second placedTaje Lynn Warrick of Davie, FL, and Dersey have proved highly competitive in the division and are closing the gap with a current total of 4,299 points, while Sarah Boston of Owings Mills, MD and Herminas have maintained third place with their total of 3,008 points.
Madison Myro of Henderson, NV and Q Royal Palm Z, last month’s leader in the West Coast Children’s Jumper Division Presented by EquiFit, continue to top the leaderboard with a new total of 2,005 points, while Sedona Chamblee of Keller, TX and GPS Trans Atlantic have maintained second place with 1,306 points. Katherine Gilpin of Keller, TX and Sampras, who led the division in March, are holding steady in third place with 1,059 points.
In the Low Junior/Amateur Jumper Division Presented by UltrOZ, Sima Morgello of Bronx, NY and Zopala continue to lead with 6,510 points, while Jazz J Merton of Oldwick, NJ, and Ahaveros hold second place with 6,489 points. Caelinn Leahy of Maple Park, IL and Esquilino Bay sit in third place with a total of 6,417 points.
There are some changes in the West Coast Low Junior/Amateur Jumper Division Presented by UltrOZ. Savannah Barry of Woodside, CA and Cocu continue to lead the division with 2,552 points, while Madelyn Porter of Ladue, MO has moved into second place with 1,653 points aboard Boudi. Megan MacPherson of Boulder, CO and Deep Snow sit in third place with 1,565 points.
With a total of 2,672 points, Melanie Jeanes of Dallas, TX, and Carrera are still the leaders in the Adult Hunter Division, but second placed Charlotte Williams of Fulton, MD, and Frontman are closing the gap with 2,459 points. Patricia Schindler of Reisterstown, MD and Glyndon have entered the top rankings with a total 2,173 points for third place.
Jeanes and Carrera also continue to lead the West Coast Adult Hunter Division with 2,672 points. Mary Grossman of Burlington, WI is maintaining second place with Benvolio on 1,785 points, while Amy Coretz of Tulsa, OK has overtaken third place aboard Don Ramiro with 1,521 points in the division.
The Children’s Hunter Division is heating up after the May results with some big changes in the top three. Annie Walsh of Cazenovia, NY and Erosmith have added nearly four hundred points to continue their lead with a new total of2,127 points. Helen Lohr of Warrenton, VA and Costar have jumped into second place with 1,916 points, while third place is now occupied by Molly Canfield of Chicago, IL and Penny Lane, who have earned 1,877 points so far this season.
CeCe Siegfried of Tulsa, OK and  and Finally Found continue to lead the West Coast Children’s Hunter Division with 1,465 points while Stella Wasserman of Beverly Hills, CA and Fine Design continue in second place with 1,080 points. Hot on her heels is Catherine Chartier of Overland Park, KS who has moved in third place with 1,008 points aboard Notorious. For more information regarding the North American League series please call(717) 867-5643, email to NAL@Ryegate.com or visit www.ryegate.com. Follow us on Facebook at https://www.facebook.com/NALFinals.