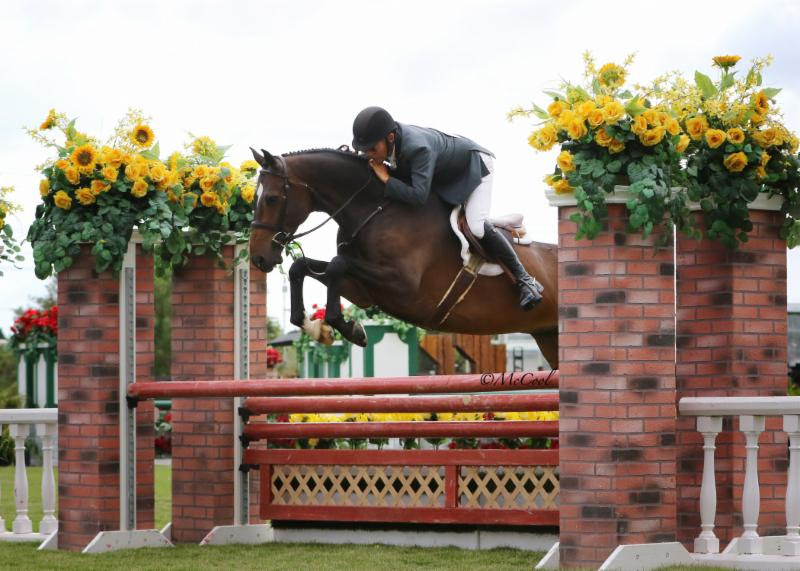 Competing fifth out of 30 entries, Small Gesture dominated the first round scoring with an impressive 92 from not just one panel but both panels of esteemed judges. Panel One judges were Kim Dorfman and Bucky Reynolds, while Diane Carney and Shane George adjudicated from across the field on Panel Two. Holding the lead in Round Two, the refined dark bay, owned by Iwasaki & Reilly, finished with an overall score of 180.5.

French remarked on the ride. “He is nice. Because he did the jumpers, you can sit on him and put leg on and not have to sit chilly. I can gallop up to a single oxer knowing that he will back himself off and jump it great. I couldn’t be happier with his first round.”

Originally purchased to do the equitation division, owners Chris Iwasaki and Liz Reilly recognized the hidden hunter in the horse who has been winning in the Second Year and Junior divisions as well as on the Derby field.  “We bought him from Georgy Maskrey-Segesman last October as an Equitation horse, but we found out quickly that he was probably a world class Hunter, and he is,” noted Reilly.

Known as ‘Nemo’ in the barn, he will go on to compete at the USHJA International Hunter Derby Championships later this summer in Lexington, KY, as well as hit the Indoor Circuit in the fall.

Galloping in the Reserve Champion spot was the flashy pair from Northern California, Corriendo Tau and Hope Glynn. With ears pricked forward and knees wrapped around his nose, the pure white talent is reminiscent of a large pony hunter. With a final score of 175.5, they also scored well in round one, earning a 90 and 88.  When asked about the horse owned by Karen Trione, Glynn was all smiles. Not always the quintessential ‘pony’ hunter, she elaborated.

“He is a First Year horse that moved to me at the end of last year. He was gelded late, and when he came to me he was a very willing horse, but it took a bit to get him to simmer down to where he thought the hunters was his job and not to wind up and go around like a jumper,” said Glynn. “He’s just a wonderful horse that now also does the Adult Amateur hunters with his owner. I was lucky enough that she let me play with him for the last two weeks. He did his first International Derby at Paso Robles and was fourth, and we are taking him to compete in the Derby at Franktown Meadows later in the month.”

About the ride, Glynn went on to say, “I can always trust that he wants to go to the other side so I feel confident galloping down to the jumps. And, he is just fun to be around. I am super lucky to have two pretty grey horses that jump well.”

The appropriately named Cy Young, who is ready to ‘pitch’ the perfect jump each time he leaves the ground, rounded out the top three in the class.  Piloted by Tara Metzner, another well-known name in the Hunter world, the big-strided bay, owned by Davlyn Farms, finished with a total score of 173.

Metzner noted that these types of competitive hunter classes are his calling. “He has a nice big stride. He walks down the lines, is brave and has so much scope. He will finish in the First Years and go on to the High Performance Hunters. This is his third class like this, and it is definitely his thing.”

Between round one and two, USHJA presented WCHR High-Score awards to riders who earned the highest scores in their WCHR divisions during the week: Professional John French and Small Affair won with a score of 90 in the 3’6″ Performance Hunters; Meghan Harris and Floriano with an 86.5 in the 3’3″ Performance Hunters earned the title High Score Developing Professional;  Julie Hancock aboard Willow CBF earned a commendable 92 in the Amateur Owner 3’6″ Division; Rachel Fern on Touch of Dutch and Teddi Mellencamp Arroyave on Sundae both earned an 86 in the Adult Amateur Division, tying for High-Score Adult Amateur. High-Score Junior Hunter 3’6″ rider went to Augusta Iwasaki for her 89 on Illusion in the Small Junior (15 & under) Division, while Stella Buckingham on Lusiant and Emma Hansen on Easy Time tied with an 86 for the Junior Hunter 3’3″ (15 & under) Division. Remaining High-Score Awards recipients will be awarded when their divisions complete on Sunday.

Recognizing the top junior ride in the WCHR Hunter Spectacular, The Plaid Horse representative Katie Cook proudly presented Gabriella Cinquini with a beautiful cooler for her first round on Coffee Talk. With three junior hunters, Cinquini has her eye on the US Junior Hunter National Championships West Coast coming this July, followed by Indoors.

Overlooking the field from the hilltop VIP tent, riders, owners and spectators enjoyed the WCHR West Coast Hunter Spectacular Gala, which supported the WCHR Program and in turn the USHJA Foundation Horseman’s Assistance Fund. With a red carpet entrance and tables dressed in black and white with beautiful and bright bouquets of flowers, attendees enjoyed a wide array of delicious dishes from The Vintage Steakhouse. Along with watching a wonderful class, gala guests had fun getting photos wearing Mardi Gras masks, oversized sunglasses and sparkly top hats, visited the colorful candy bar with ‘make-your-own’ labels, and went home with swag bags, courtesy of Valencia Saddlery.

Each year, the WCHR Program donates a portion of its proceeds to the USHJA Foundation Horseman’s Assistance Fund, which provides emergency financial assistance to individuals in times of need, such as following an illness, accident or catastrophe. This year, two former recipients of support from the Horseman’s Assistance Fund were present at the event-Devon Gibson and Mickie Sage Faber.

A lovely opening event for the Blenheim summer season, the WCHR Week is one of many highlights in a truly spectacular first week of the June Series.