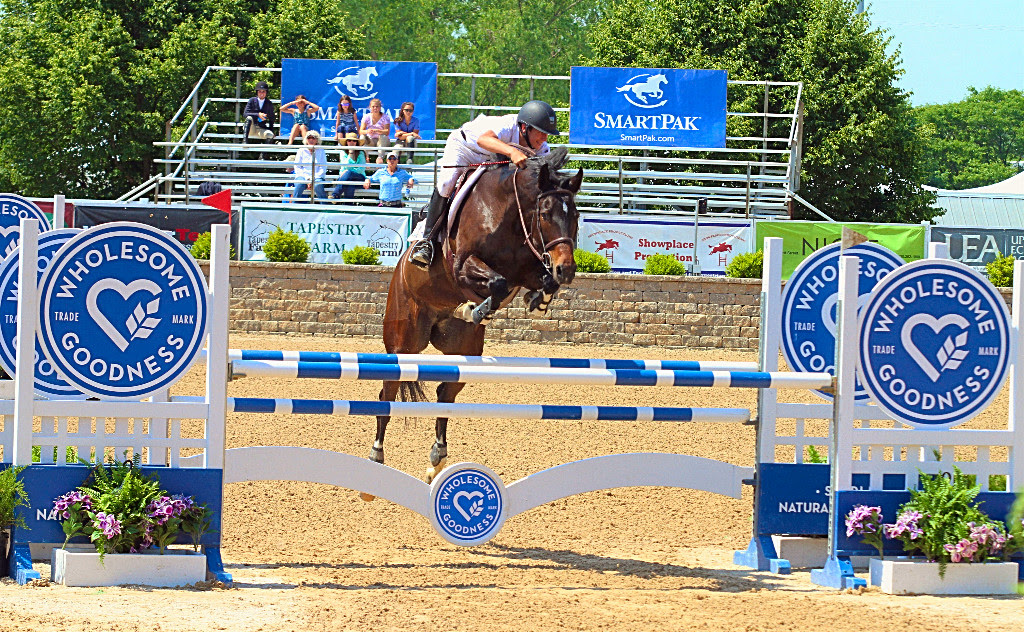 Perkovich and Roc My World

Wayne, IL –  June 10 – Kyle Perkovich and Roc My World bested their trainer, Lisa Goldman and a competitive field of 37 by flawlessly negotiating Catzy Cruz’s tricky track. The pair nabbed the top prize in the $15,000 Marshall & Sterling 1.30m Grand Prix during a fun-filled day at Showplace Productions Spring Spectacular. The event was a leg of the popular new $150,000 Marshall & Sterling 1.30m series offered at 10 Showplace Productions shows in 2016.

“I am so thrilled,” Goldman said. “I tried. I didn’t give it to him. He got me and he got me good. It’s a good feeling when your students get to a level where they’re competing against you.”

Perkovich said he committed to his plan and did his best over the technical course that included two outside lines that caused some issues and a final bending line to a skinny, a culprit of multiple downed rails.

“It turned out great. In the jump off in the first line, my six was a little long but I fixed it afterwardxPerkovich said. “I got her attention over the skinny.”

Perkovich is a big fan of his partner, Roc My World (Maya), owned by his mother, Brenda Perkovich, who also had a big day with a second place prize in the $1,500 WIHS Adult Jumper.

“She is great,” he said of the 10-year-old Irish Sport Horse mare. “She’s picky, she likes puffy mints. She’s very laid back and relaxed. When she goes to a show she lights up. This is the first time I’ve ridden in this setting – riding against these pros is a pretty big deal.”

“He moved up to the medium juniors recently,” Goldman proudly said. “He’s been with us since he was 5.”

Brenda Perkovich had taken 15 years away from riding and got back into the sport when her son Kyle started riding at Red Coat Farm. She competes Dante-B (Drake) in the Adult Jumpers.

“I love our program at our barn,” she said. “Drake and I are just always in sync. I just love that horse. He has been with Red Coat since he was 2. He is a product of Lisa. It is so much fun to ride with people in your barn.”

“We started her,” Goldman added. “She’s only done the local and the IHJA shows. It was her second show at 3’6”.

The Perkoviches make showing a family affair, and are involved and supportive of Zone 5 and Showplace Productions

“For me it’s about being safe and it’s about having a good time,” Brenda Perkovich said. “It’s just great to open up your collar and have fun.”

Brenda Perkovich owns another horse named Everlasting Goodness that Kyle Perkovich is showing in the Low Juniors. “He has now confiscated him. We’re going to see where that goes,” she joked. It’s been a great day.”

The Sisterhood of the Traveling Breeches

Alison Flury and Cosmea Z solidly won the $1,000 Low Amateur Owner Jumpers, edging out Greg Burrow and Cassim, who were second, and Kelsey Thatcher and New Girl, in third.
Cosmea Z, known as Mea in the barn, impressed Spring Spectacular spectators with her incredible jump. Flury rides with Ali Boo Farm, her sister Taylor is a respected professional.

“Taylor was showing her in Wellington and I just started showing her again, said Flury. “Taylor told me that she needed a little more training that I was unable to provide. As you know sisters how can be,” she joked.

Flury got Mea back from her sister to show at Devon, where they jumped double clear rounds each day. But she shared that she felt she was riding behind the bridle and the pair weren’t getting down the lines and committing to the distances.

“Actually I was very happy how today went, “Flury said. “Today we were more consistent and had a little more gallop.”

Flury describes Mea as the barn diva who is particular about her personal space.

“She has a lot of heart. She is a trier and she doesn’t like to have rails. If she knocks down rails she’ll buck or shake her head because she’s angry with herself. She knows she’s an athlete.”

The Flury sisters bought Mea and two others in Europe as a yearlings at the Zangersheide auction. She was actually a little upset because it was her first time going to a show without her sister, Mini. Taylor Flury trained Mea. When she was 4 Alison took her as her horse.

“Taylor is constantly trying to take her back because she is so lovely,” she joked.

Equitation 15-17 Champion and w the WIHS Equitation Hunter Phase
Gia Gulino and Armada
“She was great. I’ve only had her six months, so we’re still getting to know each other. She’s a big, flashy chestnut mare, so she stands out. I’ve been coming to these shows since I was six and I never get tired of it. There’s always something new; the jumps are always beautiful, Pat does a great job, the course designers are great. They have all these tight turns to long lines. There’s a lot of questions on each course, so you really have to look at the course for a while and plan.” Gia Gulino.

12-14 Equitation
Anna Rockwood from Wildwood, Missouri and her own Westpoint won the flat phase and one of the over fences classes and were named champions of the division.

Large Junior Hunter
Coachella owned and ridden by Sloan Hopson
Leading the large junior hunter division are Sloan Hopson and her horse, Coachella, from Houston, Texas. The 15-year-old pair placed first in the over fences and under saddle classes, and took second in hunter handy behind Hopson’s mount Chalk Hill, owned by Kaley Roeske. Hopson and Chalk Hill also took second in hunter over fences and fourth in under saddle. “I’ve been riding Coachella for about a year now. My rides were awesome in all the classes. Coachella is really funny and he loves treats. He’s so spoiled and he’s always perfect. He’s never acted bad.”

Small Junior Hunter
Giavanna Rinaldi, 16, and Bugsy Malone won two of the three small junior hunter classes including hunter over fences and under saddle. “Even though it’s hot out, we always have a lot of fun. He was perfect. He always jumps a 10 plus. I really loved our handy and the turns that we did. He’s such a smooth horse. He just goes around like it’s nothing. He trots really well in the under saddle, that’s where he shines. In the jumping, it’s his form and his looks.”


Junior Hunter 3’3
Covert owned and ridden by Elizabeth Nestor
Covert and Elizabeth Nestor, from St. Louis, Missouri, swept the junior hunter division with wins in the over fences, hunter handy and under saddle classes. “He went really well. I had an accident in January and this was my first time back in the 3’3s so it was a really good confidence booster. He’s really young, but he takes care of me in there. He’s the best horse.”

ASPCA Maclay
Cumano Boy Z owned and ridden by Amanda Pennington
“I started out in the Washington Hunter phase, and my horse was really good, but we were just a little off. We haven’t shown in a while. Then we did the Marshall and Sterling Junior/Amateur Medal and he was perfect in that, so I went into this class feeling super confident. I was just really happy with everything he’s doing for me. ‘Wally’ is a young horse, about 9-years old. He just came in from Europe about two years ago. We had a little bit of a rough patch getting to know each other, but he’s come so far. I’m just so happy with how he’s improved.”

Saturday Showplace Productions Spring Spectacular kicks off the Amateur and Adult Hunter divisions and the highlight of the day is the $30,000 Marshall & Sterling Grand Prix scheduled for 3 p.m .