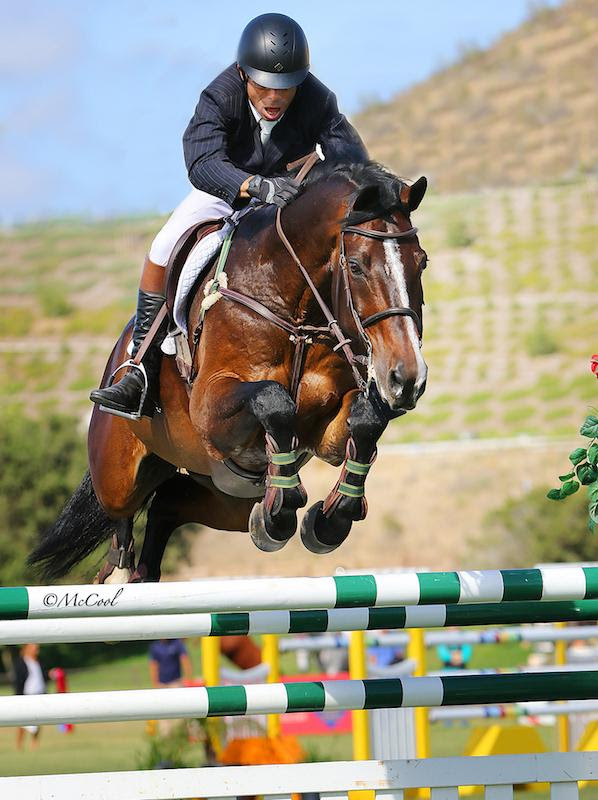 From a tight time allowed to a challenging outside line at 5, 6ab, to a ‘stout’ SmartPak vertical at fence 7, and a triple combination leading to a light vertical at the end of the course, Anderson Lima of Brazil asked plenty of questions within his track of 16 obstacles. Half of the riders in the class ended their rounds with time faults, with a heartbreaking score of one time fault for Kristin Hardin and Nicole Teague’s Firestone S, who ultimately finished third.

Two riders finished the challenging course fault free. Peter Petschenig aboard one of his three entries, the talented gray Colour Your Life, was first up for the jump-off. Wanting to set the pace yet jump clean, he was efficient and stopped the clock without a fault in 47.14.

No stranger to taking risks for the win in a jump-off, veteran Pearce knew what he had to do to take the lead aboard the 11-year-old Chantico. Very quick over the first three elements, he steadied slightly and made a smooth slicing turn to the next oxer. Leaving out a stride in the last line, Pearce beat Petschenig by several seconds, clean in a time of 43.36. With the win, Pearce and Chantico also took home the SmartPak “Fastest Time in the West” award, which included a $500 SmartPak gift certificate.

Pearce was complimentary of Lima’s track. “I’m a big fan of this course designer, and I’m not saying that just because I won today. It wasn’t huge, but it was a tight time allowed. He doesn’t make it too tight to where you can’t get it done, but he makes you pay attention.”

And the victory was especially sweet for this young and tricky grand prix mount. “This was his first Grand Prix win. He has been doing them for about a year, which has been hit and miss due to being green, but he is starting to come along. I have him in a new bit that I love and he is finally starting to grow up. He is a lot more solid, rideability wise. He is starting to mature, which is nice, because I really miss my old horse, Chianto.”

Pearce plans to “enjoy sunny Southern California” for the summer while he establishes his business in San Diego County and continues to compete in the area.

Susan Hutchison Takes Top Two Spots in the $7,500 Interactive Mortgage Futurity on Saturday and Is Officially Inducted into the Show Jumping Hall of Fame on Sunday

On Saturday, Susan Hutchison had a one-two finish in the $7,500 Interactive Mortgage Futurity. Qualifying both her mounts for the jump-off, Hutchison rode SIG Firecracker on a fast and tidy track in 42.62, and then went on to beat his time on Veronica Tracy’s entry, Daify, an 8-year-old mare, in 40.22 for the win.

Always humble and ever grateful, Hutchison had the opportunity to be honored in front of hundreds of friends and fans, as Blenheim EquiSports hosted her induction into the Show Jumping Hall of Fame. Moving from beginning to end, Hutchison entered the arena on foot, walking down the center of two lines of fellow riders and trainers, who were clapping and cheering in support.

Chef d’Equipe and friend, Robert Ridland, read her acceptance speech, per Hutchison’s request. Both “honored and flattered,” Hutchison thanked “Jimmy Williams for introducing me to the art of horsemanship, ethics, honesty and hard work.” She also thanked all those who help her horses and “most of all, to the horses I have been blessed with, who have taken me to places in the world that most people only dream of!” Awarded a beautiful Tiffany bowl and pendant, Hutchison was surrounded by many who have known her since her days as a junior, competing in the hunter and equitation divisions. With a long list of accolades, many of which took place right on the Oaks International Grand Prix field on a number of different horses, the recognition by the Show Jumping Hall of Fame is well-deserved. And as seen by Saturday’s result, Hutchison continues to keep her name on the leaderboard.

The June Classic I show serves as the final selection trials for both the Junior and Young rider teams who will represent Zone 10 at the 2016 North American Junior Young Rider Championships, July 26-31, in Parker, Colorado.

All participants competed over three days, accumulating points in a speed round, a jump-off round and a two-round format at the appropriate fence heights.  The level of difficulty increased each day, and the competition heated up as some riders changed positions throughout the week.