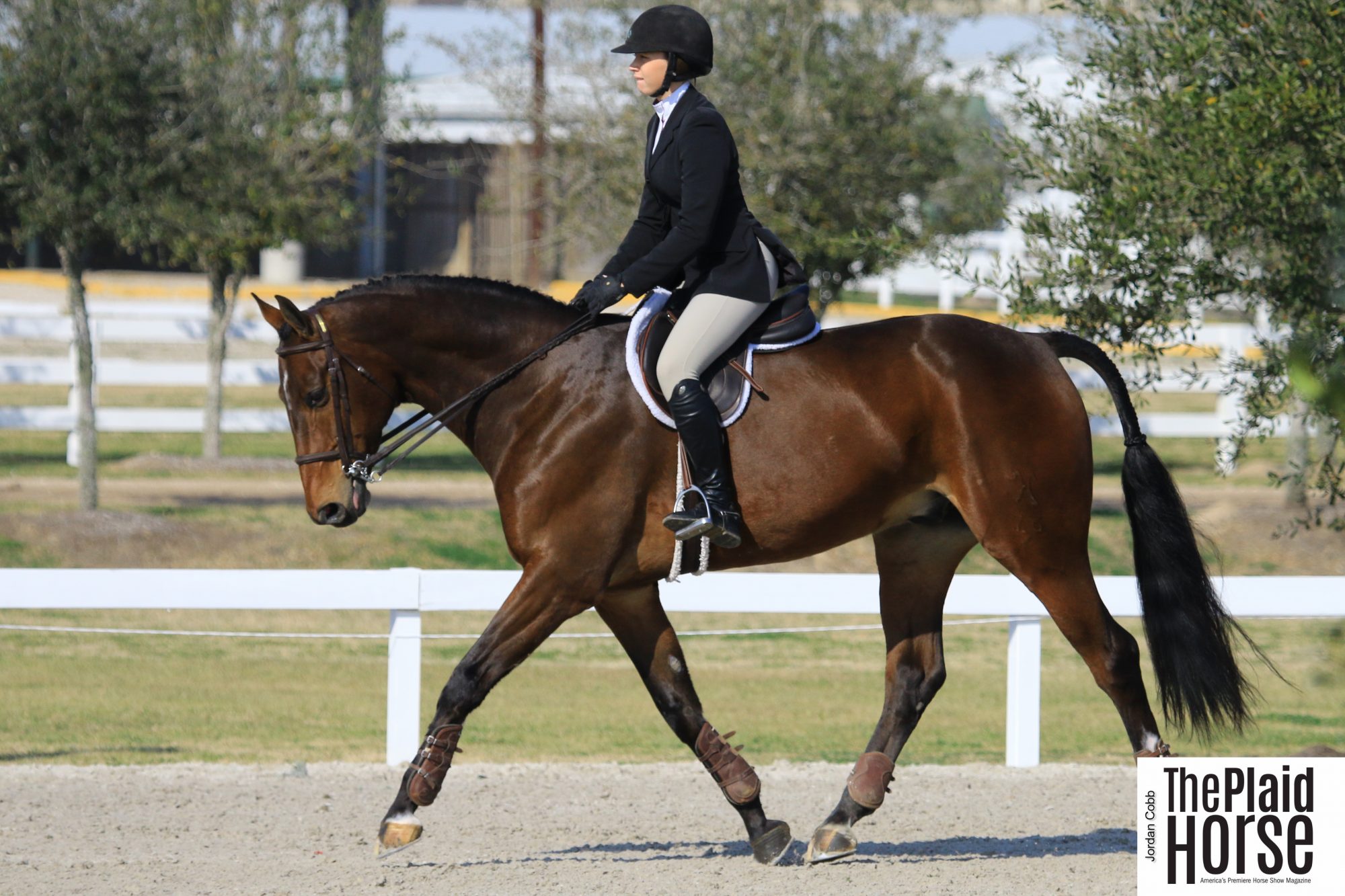 Equitation horses are incredible athletes; they must always be at the top of their game in order to assist their riders in navigating technical courses. When one visualizes such a partner, they would not immediately think of a horse that is blind in one eye. Abigail Albrecht, of Austin, TX, first rode MTM Flashdance in the late spring of 2014. His owner, Mike McCormick of MTM Farm, allowed her to show him in the equitation divisions shortly after he was imported.

While these first classes did not produce blue ribbons, Albrecht felt as if she had a connection to this horse and leased him for the summer.  Shortly after leasing “Miguel”, as he is known, she began to find success. At Summer in the Rockies, Albrecht and her mount won classes against names often seen at the top of equitation standings at Devon and Indoors.

Albrecht decided to buy Miguel following their successful summer circuit; the pair clean sweeped equitations divisions in Texas throughout the winter and fall. At the beginning of January, disaster struck; Miguel got into a barn accident and broke several vertebrae in his back. Albrecht missed her entire spring and summer season.

The pair’s first show back was the week before Maclay Regional finals. They managed to clinch 6th place in the Zone 7 Equitation final; however, they did not qualify for Maclay Finals the following week. Following this disappointment, Albrecht headed to the east coast for Capital Challenge. It was both her and Miguel’s first time going to Indoors.

The pair began to get back into the swing of things, but Albrecht noticed that Miguel had not been acting like his normal self; “He was more spooky and frantic, and that’s not his normal attitude,” says Albrecht. He’d been acting like this since his return to the show ring, but they originally just attributed it to his time off. During Capital Challenge, Albrecht had difficulty taking the inside turns to which she was accustomed. Examining Miguel in his stall late one night at The Capital Challenge Horse Show, Albrecht noticed that his right eye was blue and cloudy.

After contacting a veterinarian, he was diagnosed with a cataract one week before USEF Medal Finals at the Pennsylvania National Horse Show. An ophthalmologist diagnosed him as completely blind in one eye just before Harrisburg began. Albrecht had to guide Miguel around a daunting, technical course in a new, spooky environment with skill and sensitivity to the horse’s condition. Albrecht had to approach the ride as if she was on a new horse.

In addition to this challenge, two days before Medal Finals Albrecht suffered a serious back injury. Despite these obstacles, Albrecht and MTM Flashdance bravely managed to lay down a solid trip their first time at Medal Finals. “I’ve never had a horse so willing to do anything for me; he is truly special,” says Albrecht of her partner.

Following the adversity at Indoors, the pair won numerous classes at Waco and The Great Southwest Winter Series as preparation for the most prestigious show in the South: The Pin Oak Charity Horse Show.

The Ovation Leading Equitation Rider Award had been coveted by Albrecht since she was a young girl riding ponies  She clinched it this year along with the High Point Equitation Award. Ribboning in every round  and winning numerous blues, she attained a goal that she had been working towards for years. The ultimate success that this pair attained reveals the heart and bravery of a horse, and the skill and perseverance of a rider. How technology helps our return to competition