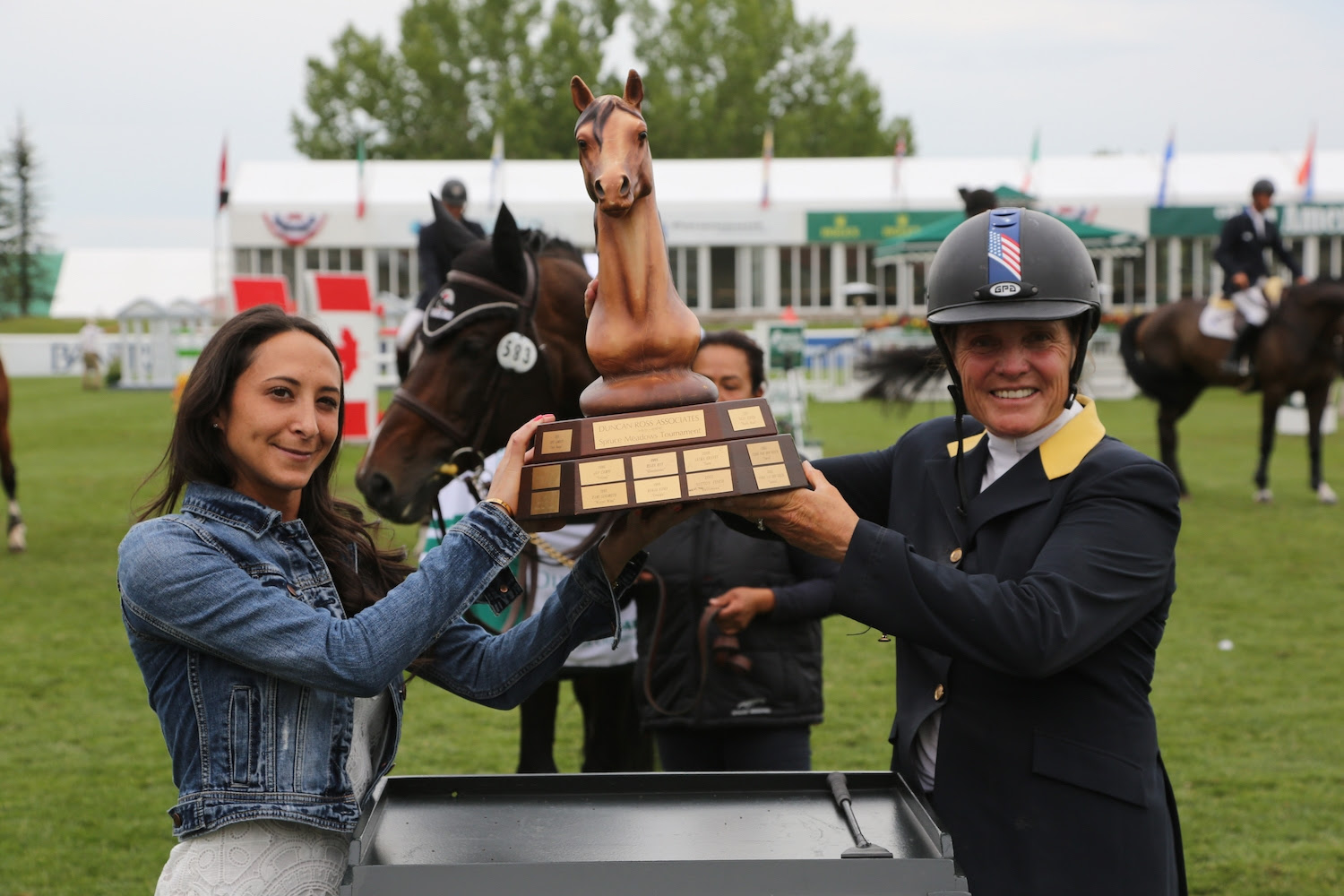 PRESS RELEASE
Calgary, AB, Canada –The Spruce Meadows ‘Pan American’ Tournament CSI 5*, presented by Rolex, continued on Friday featuring the Duncan Ross Cup 1.50m, as well as the WestJet Cup 1.45m in the Meadows on the Green. USA’s Leslie Howard jumped to an exciting win in the evening’s 1.50m aboard a brand new mount in the young stallion Quadam. Mexico’s Patricio Pasquel got the win in the 1.45m earlier in the day with his homebred gelding Babel.

Ireland’s Alan Wade set the course for 34 starters in Friday’s Duncan Ross Cup 1.50m with six entries advancing to the jump-off. Jeff Campf (USA) and Kimberly Bruce’s Wordsworth II were first to go over the short course, setting the pace in 44.19 seconds to eventually finish fourth. Nicolas Pizarro (MEX) followed with a clear round in 41.74 seconds riding Armando Torrado’s Temascaltepec RM to earn the third place prize. Theodore Boris (ISR) and Garkus van het Indihof had a good time in 40.72 seconds, but dropped two rails to finish sixth. Philipp Weishaupt (GER) jumped Ludger Beerbaum’s Liberty Son 2 into the lead with a time of 39.13 seconds, but was quickly bested by Leslie Howard and Laure Sudrea’s Quadam, who raced through the timers in 39 seconds flat. Last to go, Nick Dello Joio (USA) jumped into the fifth position with his time of 44.51 seconds riding The Corlida Group’s Corlida. Howard is no stranger to the winner’s circle at Spruce Meadows, but Friday’s victory was an exciting one for the rider, who has been working to build her partnership with Quadam since taking over the ride two months ago. The ten-year-old Hanoverian stallion (Quite Easy I x Stakkato) was previously owned and ridden by Howard’s student, Richard Neal, mostly in the amateur and U25 divisions.

“I met Laure Sudreau last year, and she loves the sport and told me to keep my eyes open if I ever saw a good one for her to buy, and I said, ‘Well, I think I have a good one right in my barn,’” Howard detailed. “So she bought him and I have been showing him since May.

“Whenever you get a new horse, it is always up and down because you do not know them, and they do not know you,” Howard noted. “Sometimes you feel like you are speaking Chinese and they are speaking Spanish, and the two of you are just not in sync, but it has been slowly getting a little bit better all the time. It was just a rail here or a rail there because we were not totally understanding each other, but today it all came together.”

Howard’s plan in the jump-off changed slightly midway through her course after realizing that she was very close to the winning time.

“I just planned to be very tight for jumps one through four,” she explained. “I watched the rider ahead of me who was winning and I thought I was right on the same time as him, but then I turned back to the vertical and I found it a little bit quiet. I thought that might have put me a smidge behind, so I just said, ‘What the heck?’ and floored it to the last two jumps. He had enough quality that he left the jumps up. He was right with me everywhere.”

Howard plans to compete Quadam again in the 1.50m this coming week at Spruce Meadows and will then work on building him up throughout the year. She is excited to see what the future holds as their partnership develops.

The WestJet Cup 1.45m was the first FEI competition held in the Meadows on the Green Friday afternoon with an exciting first international victory at Spruce Meadows for Mexico’s Patricio Pasquel. The rider guided his nine-year-old homebred gelding, Babel (Billy du Lys x High Flyer), to victory in a nine-horse jump-off out of 77 first round starters. Pasquel has been knocking on the door of Spruce Meadows’s international competition with several second place finishes and was very happy that he was finally able to get the win on Friday. He had the help of Nikolaj Hein Ruus and Norman Dello Joio on the ground, as well as a great team that got his horses ready for the competition.

“I am a businessman, so riding is my hobby,” Pasquel stated. “I was in a board meeting yesterday until 4 p.m. in Mexico City and then I got to Calgary at 3 o’clock in the morning. I had a long flight, but I have a great crew, and they had the horses ready. It is all about the team. There is a lot of work going on behind the riders that nobody sees. I really appreciate all of the people that help me.”

Pasquel qualified two mounts for Friday’s jump-off, going first in the order with Careyes, who ended the competition in seventh place overall with one rail down over the short course.

“Of course that always helps to have two horses in the jump-off because I was in the ring with that horse first and it gave me a little advantage,” Pasquel detailed. “My first horse jumped really well. I wanted to go faster with that one, but I had number two down, so I had to just wander around. Then I went in again and I said, ‘Babel wants to win today,’ and I gave it a shot.” Photos © Spruce Meadows Media Services. These photos may only be used in relation to this press release and with photo credit.