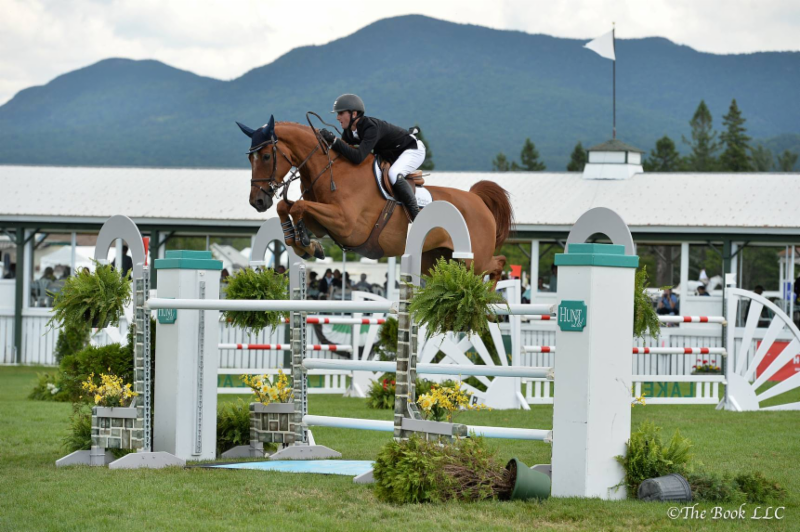 In the first round, 15 of 35 entries rode fault-free over the 15-jump course designed by Olaf Petersen, Jr. of Germany. The first to return for the eight-jump tiebreaker was Andrew Kocher on Uppie De Lis and he set the mark to beat with a clean round in 42.782 seconds.

Two rides later Hughes and Sans Soucis Z took over the lead with a clean ride in 42.207 seconds. None of the remaining 13 entries could beat Hughes’s score, although Catherine Tyree did finish in a faster time of 40.569 seconds on Enjoy Louis. However, a rail down at the second-to-last fence gave her a score of four faults and a sixth-place finish. Kocher’s score on Uppie De Lis held up for second place and third place went to Paul O’Shea who finished clean in 43.405 seconds on Primo Calypso.

“Going so early in the jump-off and knowing that I had some really fast horses and riders going after me, I didn’t think my time would hold up,” Hughes said. “Soucis is a big slow horse and I really didn’t think our time was going to be enough to win but I’m very happy with the way it worked out.”

Earlier in the day, Tori Colvin and Laura Chapot took top honors in the 1.35 and 1.40-meter jumper classes. Colvin and Chapot took four of the top five places in the Pepsi Beverages Co. 1.35-meter Jumper Class with Colvin winning the class on Chanel B 2 and also placing third on Don Juan. Chapot placed second on Umberto and fifth on Bec Hugo with Jennifer Jones taking fourth place on Farina.

In the Whiteface Mountain 1.40-meter Jumper Class, Chapot continued her streak of winning at least one class every day, sweeping the top two places. She won the class on Zealous while also placing second on Shooting Star. Third place went to Michael Hughes on Virginia WZ with Olympic veterans Peter Leone and Kevin Babington taking fourth and fifth on Capito Z and Super Chilled respectively.

In the Hunter ring, the Amateur-Owner division was completed and emerging as Grand Amateur-Owner Hunter champion was Cascarillo, ridden by Katie Robinson.

The Lake Placid Horse Show runs  through Sunday at the North Elba Showgrounds, highlighted by the $75,000 Devoucoux Grand Prix of Lake Placid on Sunday afternoon. The I Love New York Horse Show follows, July 5-10, featuring the $100,000 Equine Insurance Services/Great American Grand Pix on Saturday, July 9. Admission to the horse show is just $2.00 on weekdays and $5.00 on weekends. Children under the age of 12 are admitted free. Discounts are available for groups of 20 or more.

For a behind the scenes look at the horse show, guided walking tours are offered on Wednesday, Thursday and Friday at 11:30 a.m. The tour groups meet at the horse show retail booth, and the tours, costing just $1.00, last approximately one hour.

Weekend highlights of the Lake Placid Horse Show include:

Those unable to attend the horse show can watch all the action live online via ShowNet on their newly redesigned website at www.ShowNet.biz.

Ingram, Seaman and Karet are Grand Champions at 2021 Capital Challenge...