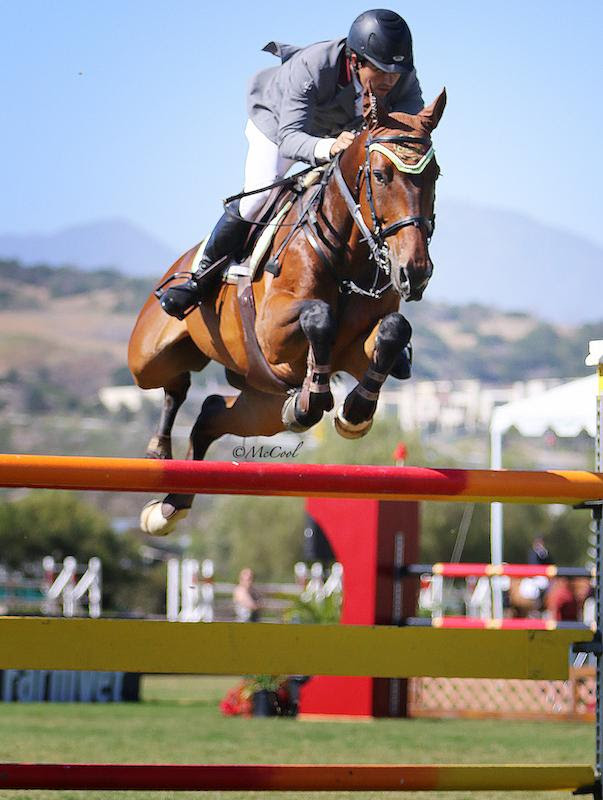 July 2, 2016 – San Juan Capistrano, CA – This afternoon’s $30,000 Markel Insurance 1.40m Grand Prix, one of the final highlights of the four week Blenheim EquiSports June Series, welcomed twenty-nine entries. With five clean, fourth to go in the jump-off, Juan Pablo Jimenez Torres of Mexico rode like the wind on Relic L.S. for a bold finish and the win.

International course designer Jack Robson (USA) set what he noted was “a very technical course.” Along with a tight time allowed, the track demanded adjustability, with a mix of bending lines, combinations, a triple bar and a plank vertical in flat cups.  Although jumps fell throughout the field, seven entries managed to leave all the jumps up, but only five within the time allowed. Michelle Parker and Cross Creek Farm Inc.’s Socrates de Midos finished sixth with just one time fault, and Santiago Vallarta with Go For Me finished with no jumps down, but three on the clock, for seventh place.

Returning first in the five horse jump-off was Mark Grock aboard Moonlite Beach, LLC’s Caretol. The pair set a speedy precedent by galloping down the first line in seven strides, angling jump 9, and finishing clean in 36.65. Last week’s winning pair, Mandy Porter and Milano (Abigail Weese, owner), put the pressure on the remaining rides, with a gallop to the last jump that took the lead in 33.79. An audience favorite, they cheered her gallant effort. A short-lived lead, as Rodrigo Lambre and Mario Onate’s Chapilot, left a stride out in the first line to shave off tenths of a second from Porter’s time. Also double clean, he crossed the timers in 33.43, snatching the top spot from Porter. Lambre also rode Onate’s Chacoubet in the jump-off, but a rail midway through relegated them to fifth overall.

Giving it his all for the win, Jimenez Torres and his nine-year-old bay Relic L.S. took the audience, and himself, by surprise when he angled fence 9 and proceeded to race down the last line faster than any of the previous riders. Soaring over the final Markel jump, they stopped the clock in 33.39 seconds, and took over the top spot.

After competing in some of Mexico’s top shows, including the Longines Global Champions Tour in Mexico City, this is the pair’s third grand prix start this season and their first win.

Thrilled with the results of his efforts, Jimenez Torres said, “I’ve been riding him since he was four. He has just been great, an amazing spirit. I didn’t know we’d gone that fast. But we tried so hard, it was unbelievable, it was amazing.”  And he continued, “I’m going to try to keep him for some time, I think he’s a really special guy. I’m going to try to do some nice grand prix classes with him, and try to put the Mexican flag on top.”

With Sunday, July 3rd as the final day of the June Series, competitors head south to Del Mar for three weeks at Showpark. While enjoying the sun and the surf, the horse show highlights include more qualifying classes for the Interactive Mortgage 10 & Under Futurity Series Final, the Interactive Mortgage U25 Series Final, the Markel Insurance 1.40m Series Final, two national grand prix events, the U.S. Junior Hunter National Championships West and Hunterdon Equitation Cup Classic, to name a few. The prize list is available at showpark.com.