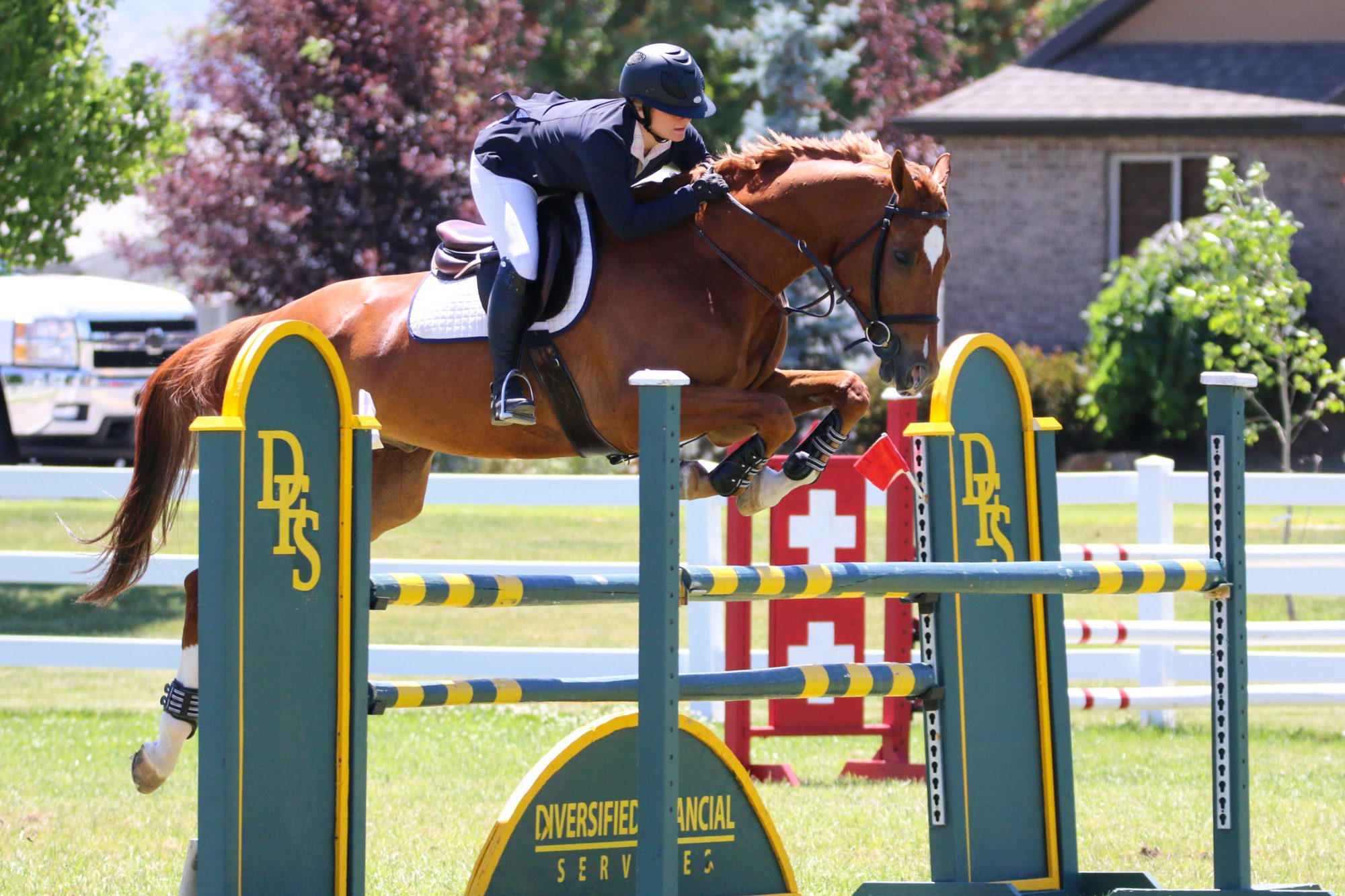 [Pictured above: Truscott’s Surf’s Up]

Two weeks of horse showing with two horses and multiple catch rides, there was lots of opportunity and hope for Kaitlyn Truscott coming into the Wasatch Horse Shows Summer Classics I & II. Truscott rode her own Surf’s Up in the 1.10m jumper classes, Pony Lane Farm’s Licapo in the 1.0m jumpers, as well as Sundancing and Captain Butterscotch in the Large Pony Hunters for owners Carol Diane Knight and Jodi Bentley, respectively.

Truscott’s big win of the first week was with Surf’s Up, her six year old American Warmblood. Although Truscott now owns him, Surf’s Up comes from the owners of her other mount, Pony Lane Farm and the Thatcher family. Surf’s Up is by the stallion Milous De Fontaine who the Thatchers used to own, and the mare Hawaii. Truscott acquired the gelding in April of 2015, and made a great partnership from the beginning, moving up quickly and consistently being competitive.

After wins in the children’s classes, Truscott took on the $1,500 1.0m Jumper Classic sponsored by her family’s Diversified Financial Services and took the win with Surf’s Up, as well as fourth with Licapo. She also won classes on both Sundancing and Captain Butterscotch in the Large Pony Hunters including the pony classic.

During week two, the results flipped. Licapo won the $1,500 1.0m Classic, and Surf’s Up moved up to win the 1.10m Classic. Truscott’s horses are very different to ride, and learning to adjust to their rides was a work in progress.

“I have to get [Licapo] to the bottom of the jump, whereas [Surf’s Up] prefers the longer distance. Both horses have to be in front of my leg, but when I’m riding, I have to train my eye to the horse I’m on,” explained Truscott.

Unfortunately, the transition between horses will not continue, as Truscott is only leasing Licapo month by month, and with lots of out of state travelling to come, she will not continue her lease on him, at least for the rest of the summer.

“My goal with [Licapo] was to learn to ride a completely different horse, and try to be successful on him… and hopefully build him up to be able to go back on the circuit,” said Truscott of her experience riding Licapo.

With sights set on two weeks at Summer in the Rockies in Parker, Colo. and then the Emerging Athletes Program, followed by Children’s Jumper Championships, Truscott has big hopes for the upcoming months with Surf’s Up.

“A huge thanks to my main trainer, Michael Knight, for getting me to where I am today and giving me all of the opportunities that I would never have had without him. And a huge thank you to Maura Thatcher and [Pony Lane Farm] for letting me ride her horses.”

It’s In the Details: The Quarter Marks of Land Rover Kentucky...