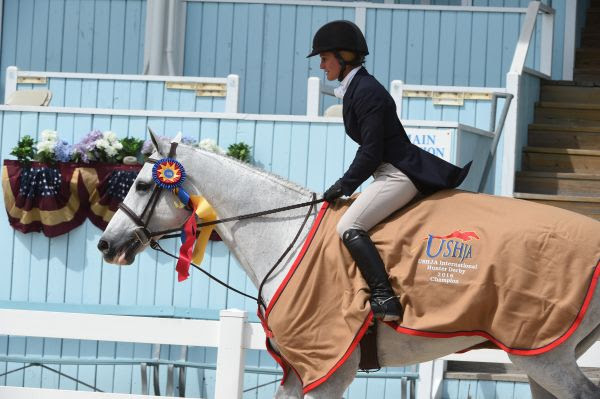 Devon, PA – July 10, 2016 – On Sunday afternoon, two weeks of top-quality hunter/jumper competition wrapped up at the Brandywine Horse Shows. Held at the Devon Horse Show grounds and now in its sixth year, the premier rated horse shows hosted top riders, horses and trainers from across the country.

Among the top riders were Catherine Ellis and Sandy Ferrell, each of whom earned the title of Leading Hunter Rider, with Ellis taking the honor during week one and Ferrell claiming the title during week two – an honor which she also claimed in 2015.

In addition to the championship in the Conformation Hunter division during week one with Lady Stella, Ellis won the Grey Slipper Trophy, which is awarded to the Supreme Hunter Professional by Bridget Hallman and Merrylegs Farm.

Ferrell also cinched the division championships in both the Pre Green Hunter 3′ and the Performance Hunter 3’6″ with Hemmingway, owned by Stephanie Bulger. Ferrell said the 6-year-old gelding was purchased by Bulger a year ago at Brandywine.

“Hemmingway was one of those situations that was just fate for them to have him and for me to be able to ride him,” Ferrell said. “We saw him go last year and knew he was an amazing horse, but I don’t know if any of us knew just how special he was. His fan club has grown tenfold. He is really what every hunter rider dreams of having. He just is such an extremely special animal, and I am so blessed to have him to ride.”

Adding to her list of victories, Ferrell piloted Meredith Lipke’s Fifty Shades to the win in the $15,000 USHJA International Hunter Derby during the first week of the Brandywine Horse Shows.

“I can’t say Fifty Shades is a veteran at the hunter derbies because we’ve only done a little bit of them,” Ferrell explained. “The one thing about Fifty Shades is that the jumps can’t be big enough, and that’s what makes him a great derby horse.”

Ferrell is a frequent competitor at the Brandywine Horse Shows, and said she enjoys the show’s atmosphere and focus on the exhibitors.

“This horse show is beautifully organized,” Ferrell commented. “Kudos to Geoff Teall, Jennifer Burger, Louise Serio – the whole team. The entire committee does such a nice job. When you only have two rings, it’s very easy to specialize everything that you do, and I think that’s very important. The hospitality is amazing; they’re always doing things to make sure the exhibitors and the horses are comfortable in the heat, and there’s always drinks and snacks. They truly do care that the exhibitors are prepared to enjoy themselves.”

Ferrell concluded, “All of us as riders are successful based on the horses that we ride. A lot of us have a tremendous amount of talent, but we also have to be provided with very good horses. I am very blessed to have numerous fancy horses to ride for a menagerie of people. That’s what really allowed me to win the Leading Hunter Rider award.”

During week two, the USHJA $5,000 National Hunter Derby continued the derby action, and it was junior rider Alexa Schwartz and Hunt LTD’s Zoomerang who claimed the top spot. The duo also won the championship honors in the Junior Hunter 3’3″ 16-17 division.

In the Junior Hunter divisions, it was Emma Kurtz who stole the show two weeks in a row, winning the Grand Junior Hunter honors first aboard David Gochman’s Dominik and later atop David Gochman’s Fredrick. Kurtz and Fredrick tied for the week-two championship honors with Caroline Dance and Cinemagic.

“It was really cool, being grand two weeks in a row,” Kurtz said. “This was only my first time showing Dominik, so that was pretty cool. The Gochmans are in Traverse City, so they sent him here. Fredrick was great the second week. It’s funny because last year I was grand the first week and tied the second week, too.”

During week one, Kurtz also took home the division championships in section A of the Large Junior Hunter 15 and Under with Scott Stewart’s Caldwell, and brought home the reserve honors in section B with Frontman, a Rivers Edge entry.

Kurtz said she will show both Dominik and Caldwell during the 2016 East Coast U.S. Junior Hunter Finals, which begin on Monday, July 11.

“Brandywine is a more relaxed vibe, but it’s a lot of fun being here,” Kurtz said of the show. “I love this showgrounds.”

Amateur rider Stephanie Danhakl also had an amazing week at Brandywine Valley I. She took home the Grand Amateur Hunter award with her own Enough Said after also claiming the Amateur/Owner Hunter 3’3″ 18-35 division championship.

“I actually hadn’t ridden for about three weeks before the show, so I was a little bit nervous about how I would do,” Danhakl shared. “I was confident my horses would be good, and they really were. Enough Said was great. We have a really good relationship, and he’s always perfect.”

The talented rider also took home both the championship and reserve champion honors in the Amateur/Owner Hunter 3’6″ 18-35 division aboard Golden Rule and First Light, respectively. She was not done yet, however, and also added the Bill Rube Amateur Style Award and West Chester Hunt Trophy to her winnings during week one.

“I had never actually been to the Brandywine series before, so it was my first time going,” Danhakl said. “I’ve been to the venue for Devon, but I heard great things about Brandywine, so I was really excited. You have all the amenities and the great rings without the intensity of Devon. I love the venue, and they did a beautiful job decorating the jumps. They did a really great job.”

During week two, the Grand Amateur Hunter honors went to Caroline Kellogg, who tied in points for the top spot with two of her horses: Donovan and Trendy.

Both weeks at Brandywine featured jumper highlights as well, with the Grand Jumper Honors being awarded to Chloe White during week one, and Taylor St. Jacques and Emma Seving at the end of week two.

The entire Brandywine Horse Shows team expressed appreciation to the staff, exhibitors, sponsors and everyone who made the 2016 shows a success.

The mission of our show is to provide ‘AA’ quality competition that benefits other non-profit organizations. The opportunity to include the Chester County Food Bank and The Making a Dream Grant as beneficiaries ties directly to that goal.