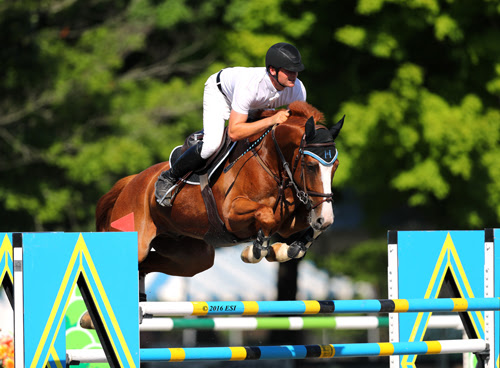 PRESS RELEASE
Seven advanced to the jump-off over the course set by Jerry Dougherty of Bokeelia, Florida, but the team to beat proved to be Matthias Hollberg of Middleburg, Virginia, aboard Czechmate, owned by Courtney Ramsey.Culpeper, VA (July 9, 2016): Show jumping returned to HITS Commonwealth Park during the Showday National, the first of the two-week July series at HITS Culpeper. The weekend kicked off with Friday’s$25,000 Brook Ledge and riders lined up to take their shot at the title.

“I want to say thank you to Brook Ledge for sponsoring this class and thanks to Courtney Ramsey, for letting me ride this great horse,” said Hollberg.

The first of seven to contest the shortened course was the victor, Hollberg, this time aboard Aletta, owned by Olympic Dreams, LLC.

“The first-round course was a nice track and all of the horses seemed to jump great; the jump-off had a very difficult turn back to a combination that proved to be a challenge for many—[Aletta and I] were first to try the combination in the jump-off, and it was difficult.”

That challenging mid-course combination resulted in an eventual eight-fault score for Hollberg and Aletta as they crossed the timers in 47.489, enough to land them the fifth-place prize.

Following Hollberg was Ocala, Florida, equestrian Ian Silitch piloting Cordovo, owned by Gaston Family Investments. They took to the course at a slower pace hoping for a clean round, but had an unfortunate rail at the second fence, followed by a rail at the A element of the combination. They crossed the finish in 62.908, earning time faults in addition to eight jumping faults, ultimately placing them seventh.

Harold Chopping of Southern Pines, North Carolina, returned for the jump-off next with Contefino 6, owned by Caroline Russell Howe and Lisa Tolnitch. Having won both Grand Prix at  Culpeper Week I in April, Chopping was hoping to continue his streak.  While their four-fault trip in 50.102 would give them the temporary lead, their score would ultimately place them second.

Next to test the jump-off was Maryann Charles of Southern Pines, North Carolina, and FVF Sailor Man, owned by Fox View Farm. They too made it through the course with four faults, a result of a rail at the second fence, crossing the finish in 50.943, just fractions behind Chopping. The round would ultimately earn them the third-place prize.

A clear round had yet to be seen, until Hollberg and his winning mount Czechmate challenged the shortened course.

“The tough turn before the combination was trouble with my first horse, so my goal was to make sure to get straight into the combination and go at a medium speed through the course.”

Hollberg piloted Czechmate through the course, conquering the combination according to his plan, to finish fault-free in 51.631, just within the time allowed to rise to the top of the leaderboard.

Also of Middleburg, Virginia, Gavin Moylan took a chance at capturing the title with Pernod, owned by Alpha Omega Farm. A fast pace, but with trouble at the outset of the course, as well as rails at both elements of the combination ultimately earned them sixth-place with a time of 47.933.

The last rider to advance to the jump-off was Kevin McCarthy of North Salem, New York, aboard Analyze This, owned by Kimberly Jakubowski. It looked as though a clear round was on the horizon as they took each fence without fault, but their time of 55.156 earned them four time faults, eventually landing them the fourth-place prize.

For more information and a complete schedule of classes and events, visit www.HitsShows.com. Stay connected with HITS! Join us on Facebook and follow us on Twitter and Instagram. Media should contact the HITS Media Team at 845.246.8833 or e-mail media_info@HitsShows.com.About HITS, Inc.
HITS, Inc. produces high-quality, international-level hunter/jumper horse shows. Based in upstate New York in the Village of Saugerties, HITS has been producing shows since 1982 and is now a nationwide company with world-class circuits in California, Florida, Arizona, New York, and Virginia.While hosting the richest weekend in show jumping at HITS-on-the-Hudson, HITS also formed the Triple Crown of Show Jumping. This includes the AIG $1 Million Grand Prix in Thermal, California, the Great American $1 Million Grand Prix in Ocala, Florida and Saugerties $1 Million Grand Prix in Saugerties, New York.