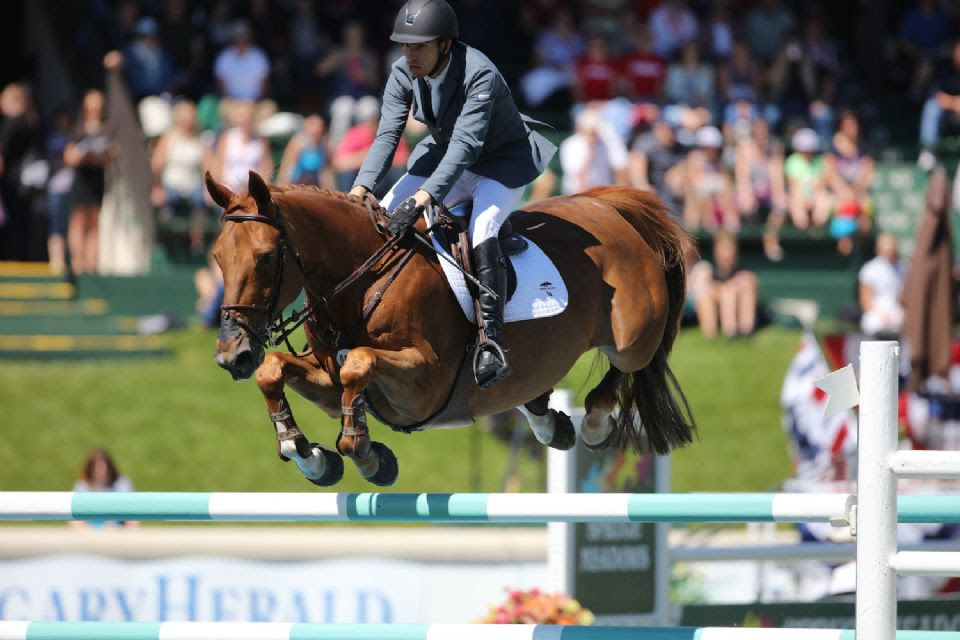 Calgary, AB, Canada – On Sunday at Spruce Meadows, Calgary’s own Chris Surbey (CAN) made history by becoming the 20th rider ever to jump a clear round in the long-running Enbridge Classic Derby. Surbey and Linda Southern-Heathcott’s Quetchup de la Roque joined an impressive list of winners, completing the only clear round out of 13 starters, to win Sunday’s feature competition. Daniel Coyle (IRL) riding Ridley and Lisa Carlsen (CAN) aboard Worlds Judgment finished second and third respectively, each finishing the course with eight faults.

The Spruce Meadows 1.45m Classic, presented by Kubota, concluded the ‘North American’ Tournament CSI5*, presented by Rolex, with a win for Leslie Howard (USA) and Donna Speciale. Sunday’s great sport rounded out the final week of competition in the 2016 Spruce Meadows Summer Series.

Thirteen entries contested Sunday’s Enbridge Classic Derby, which saw seven competitors finish with eight faults, and only the one clear round. Great Britain’s Pamela Carruthers designed the original course in 1985 and redesigned the track in 1990. For the last 26 years, the course has been the same. But out of 650 total attempts, Chris Surbey and Quetchup de la Roque are only the 20th pair to ever complete a clear round.

Featuring a demanding 16 numbered obstacles and 23 jumping efforts, the Enbridge Classic Derby is an incredible test of endurance and stamina for both horse and rider. The most challenging obstacles include a 26-foot bank, double liverpools, and a Devil’s Dyke.

Born and raised in Calgary, Surbey (29) began riding as a professional for Spruce Meadows two years ago, and took over the ride on Quetchup de laRoque from Kelly Koss-Brix last fall.“Her whole life, I think she has always had a heart of gold,” Surbey said of the 12-year-old Selle Francais mare (Quidam de Revel x Kannan). “She tries her best every time out. She is very careful, she is quick, she can turn, and she is brave. She has everything I think you need for a good derby partner.”

Speaking of his second, very successful attempt at the derby, Surbey noted, “We jumped at the National, and she was actually quite good, but that was her first try. I was hoping that we would improve from there, but I was not quite expecting a clear round. I was just excited that Quetchup dug deep and showed us what she can do.

“In this attempt, I was maybe a little bit more relaxed,” Surbey detailed. “Obviously the first time in, you are not sure how they are going to react to some of the different natural jumps out there, but she showed us in June that she was comfortable. I think I had more of a relaxed approach today and she was able to take her time and jump a clear round.”

Surbey stated that completing one of so few clear rounds over the track is just “icing on the cake” to winning the coveted event. The obstacle on course that worried him the most was actually the smallest, but his horse handled the entire track with confidence.

Subrey explained, “Honestly, I do not think any part of the course concerned my horse. But I have to say, I have never been afraid of such a small jump in my life with that fence on top of the bank. That is probably the most intimidating jump because it is so close to the edge of the hill. Some horses even refuse to jump it because they can see the edge coming, so it is really an exercise in timing and patience, as well as bravery on the side of the horse.”
Daniel Coyle and Lisa Carlsen traded places in this week’s derby after Carlsen placed second and Coyle finished third in the CNOOC Nexen Cup Derby during the ‘National’ Tournament.

Riding to second place on Sunday with the fastest eight-fault round in 135.58 seconds, Coyle was aboard Ridley, a ten-year-old Canadian Sport Horse gelding (Ustinov x Adiantus AS) owned by Susan Grange.

Speaking of his return to the derby track with Ridley, Coyle stated, “I did not know what was going to happen today because it was only his second derby. He is not the most talented horse in the world, but he is one of the best for trying. I had two very simple fences down. I think mostly it just came from him being tired at this stage after five weeks of jumping here. Then again, I had an early fence down, so I could be fast and play to my advantages.”

Like many Irish riders, Coyle grew up jumping derbies in his home country, but noted that derby success really depends on the horse.

“Anytime there was a derby we did them,” Coyle said. “Irish people do the derbies a lot more than other countries. Maybe that is why I am a wee bit better at this than I thought, but at the end of the day we can be as good as we want, but the horse has to jump the fences. It really comes down to them.”

Commenting on the impressive event at Spruce Meadows, Coyle added, “The derby is a brilliant competition for riders and horses. Some riders are better at derbies, and some horses are better at derbies than actual show jumping, so it is great for us to be fit to do both. To be in the ring that long with a big crowd cheering you on is very exciting.”
Lisa Carlsen and Worlds Judgement

Lisa Carlsen was a little challenged on Sunday riding with a strained groin, but felt confident in her horse, who has jumped consistently in derby competitions for several years.

“She is super brave,” Carlsen said of Worlds Judgement. “I do not think the mare has ever stopped with me. She does everything I have ever asked her to do. She is just super brave and talented, so she is a good derby horse.”

Commenting on her round, Carlsen added, “My mare was a little too fresh today because I have not been able to get her in the ring enough. She was more aggressive than I would have liked, but that’s just life.”

Daniel Coyle (IRL) finished second in 40.18 seconds aboard Fortis Fortuna for Susan and Ariel Grange. Andrew Ramsay (USA) and The Doodle Group’s Cocq a Doodle placed third in 40.55 seconds. Mario Deslauriers (USA) took fourth place honors with Wishing Well Farm LLC’s Cherrypop in 42.57 seconds, and Ben Asselin (CAN) finished fifth with Attache Stables’ Cool Feeling in a time of 42.99 seconds.Donna Speciale, an eight-year-old Dutch Warmblood mare (Cavalier x Concorde), is a new ride for Howard this year. The pair first joined up in January and started this summer competing at the 1.40m-level. Over four weeks at Spruce Meadows, the young horse has made great progress and jumped her first 1.50m at the beginning of this week. For the final day of competition, Howard dropped her back

Donna Speciale, an eight-year-old Dutch Warmblood mare (Cavalier x Concorde), is a new ride for Howard this year. The pair first joined up in January and started this summer competing at the 1.40m-level. Over four weeks at Spruce Meadows, the young horse has made great progress and jumped her first 1.50m at the beginning of this week. For the final day of competition, Howard dropped her back down, and let the mare’s speed come out in full force for the first time.

“She got some ribbons in the1.45m competitions, but I never really let her open up in the jump-offs,” Howard detailed. “She had one rail this whole circuit in four weeks and that was only in her very first 1.45m. Then I let her move up to the 1.50m and she was great. She is young and eager; I think she will jump a lot bigger. I think she is world-class, but I did not want to show her any bigger than that yet.”

Daniel Coyle had a very fast round with Fortis Fortuna, and Howard explained that at first she was not going to try to beat him, but the mare’s natural speed took over.

“I do not have to do much encouraging with her,” Howard explained. “Going slow is the struggle; going fast is easy. She is a young horse, but she had a lot of great mileage in Holland. She is just a natural at going fast.

“The nice thing about her, or any good speed horse, is that if you lean your body a little right or left they immediately try to find the jump that your body language is taking them to,” Howard continued. “She was immediately searching and locking in on the next jump, so it makes it so easy. I think that is something that they are almost born with. They have to learn it, but some horses you could spend hours trying to teach them to turn and look for the jump, and they never get it. She is just innately a fast horse.”

Commenting on Santiago Varela’s courses, Howard praised, “I think Santiago did a fabulous job all week. We could not have asked for more. The courses were fair, they made sense, and they progressed at a nice level. They started out the week easy so the horses got encouraged and then they built up during the week. I thought it was super.”

Coyle also commented on his round with Fortis Fortuna, stating, “Today I was not sure what to expect because the last round I jumped on the mare did not go to plan. In the jump-off, I honestly do not think I could have gone much faster and jumped a clear, so congratulations to Leslie.”

Rounding out a fantastic summer, Coyle concluded, “All of my horses have jumped really well here. It was my first time at Spruce Meadows, and I love the show, and all of the people. I want to thank everybody for that. For my first time here, they made me feel very welcome.”

Sunday’s competition concluded the 2016 Spruce Meadows Summer Series. The ‘Masters’ Tournament CSIO 5* is the next feature event on September 7-11, 2016.

Photos © Spruce Meadows Media Services. These photos may only be used in relation to this press release and with photo credit.

Charlotte Clark and Kinsella Fly to the Win in $25,000 WEC Grand Prix

Tips for Every Boarding Agreement to Protect Facility Owners from Boarders...