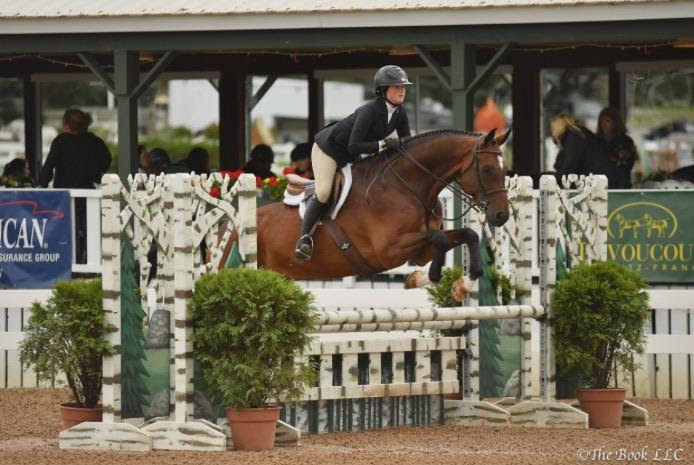 Julia Stento and Magnetic in the Children’s  Hunter 15-17 Division.

Julia Stento and Radler Equine’s Magnetic scored consistently in the 80s in the Children’s Hunter 15-17 division and earned 2nd, 4th, 6th and 7th place finishes over fences and claiming 5th place in the under saddle class. Julia’s sister, Kate, participated in the Low Adult Amateur Jumper division and also made her way into the ribbons, placing 7th in one class aboard her horse Bixby Way.Wellesley, MA – July 11, 2016 – Students from the Karen Stives ’68 Equestrian Center at Dana Hall participated in the 47th annual Lake Placid Horse Show and won several top ribbons.

Dana Hall is one of only a few New England schools to offer a comprehensive riding program and riding has been an option at Dana Hall since the 1930s. Located right on campus, the Karen Stives ’68 Equestrian Center offers complete stable facilities and classes ranging from beginner to advanced with instruction to suit every level of rider.

With an emphasis on confidence, safety and control at every level, Dana Hall riders build confidence, self-discipline and teamwork.Approximately 100 students participate in the school’s program each year. The school currently houses 45 horses on the property with half of those boarded by students and half school horses. Students in the program compete at local and A-rated shows in the Northeast such as Saratoga, the Vermont Summer Festival, Lake Placid, Grazing Fields, and Fieldstone as well as the HITS Ocala Winter Circuit. Dana Hall is consistently represented at all the top equitation finals including the New England Equitation Championship, WIHS Equitation Finals, Capital Challenge, USEF Medal Finals and the Maclay Finals.

Lake Placid is one of the premier stops on the nation’s hunter-jumper horse show circuit, featuring the nation’s best horses and riders competing in four show rings. The show hosts more than 100 classes of competition each week with all levels of competition ranging from leadline to grand prix. Both weeks are USEF ‘AA’ rated for hunters and 6* rated for jumpers and include nearly $550,000 in prizes.

The Lake Placid Horse Shows provides both a valuable and competitive experience for Dana Hall riders. With more than 500 exhibitors competing, the students face tough opposition in every class featured in the hunter and jumper rings. Not only do they gain advantageous skills for when they return to Dana Hall’s Wellesley, Mass., campus, but they also have the opportunity to watch Olympic riders and learn from their training. Sarah Summers, director of The Karen Stives ’68 Equestrian Center commented, “The environment and caliber of riders at these national horse shows both inspires and motivates our students.”

The first week of the 47th annual Lake Placid Horse shows was full of action-packed victories from top athletes. Returning riders such as Laura Chapot, Andrew Kocher, Michael Hughes all claimed top finishes in the jumper ring and Irish Olympian Kevin Babington provided an exciting culmination to the week with a win in the $75,000 Devoucoux Grand Prix of Lake Placid.

Founded in 1881, Dana Hall School in Wellesley, Mass., is an independent boarding and day school for girls in grades 5-12. Placing emphasis upon sound academic education and the preparation of each individual for college and for life, the School balances exposure to new ideas and the challenge of analytic and creative thinking with concentration on the development of self-esteem, leadership, and respect for others. As a school for girls, Dana Hall provides female students with a particularly advantageous environment for both education and self-development.

Conor Swail the Master of the Speed Wins the Maui Jim...