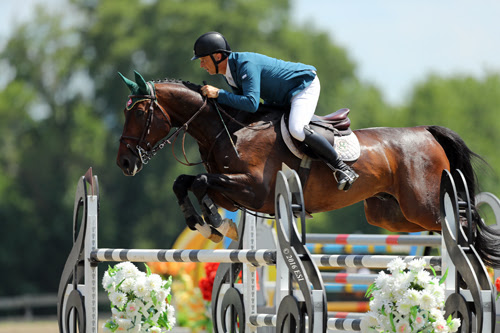 (C) ESI Photography
Gavin Moylan and Pernod on their way to a $30,000 HITS Grand Prix win.

Culpeper, VA (July 12, 2016): As the curtain closed on Showday National at HITS Culpeper on Sunday, riders returned to the Grand Prix ring to contend for the top prize in the $30,000 HITS Grand Prix.

Hot off a win in the $5,000 Devoucoux Hunter Prix, Gavin Moylan returned to the jumper ring and topped the Grand Prix field to stake claims on the blue ribbon once again. The Middleburg, Virginia, equestrian’s victory came aboard Pernod, owned by Alpha Omega Farm of Virginia Beach, Virginia.

“Thank you to HITS for sponsoring this class, it was special to win a Grand Prix at Culpeper,” said Moylan. “I’ve competed here more than any other venue in my professional career and it’s close to home. To win both of these classes this weekend was great.”

Moylan also nodded special thanks to Bart and Abby Frye of Alpha Omega Farm for their support, as well as his wife, Alden.

Only two would jump clear over the course set by Jerry Dougherty of Bokeelia, Florida. Moylan was joined in contest over the shortened course by Harold Chopping of Southern Pines, North Carolina, and Basje, owned by Kendra Bullington; in an interesting twist, Chopping won both the $5,000 Devoucoux Hunter Prix and the $30,000 HITS Grand Prix in Culpeper Week I in April, and placed second to Moylan this week in both classes.

“The course definitely presented a challenge and I wasn’t too surprised that there were only two clean,” said Moylan. “The last line was tricky for all of the horses — it was a difficult triple combination, followed by a technical 5-stride to an oxer at the end.”

The jump-off was down to Moylan and Chopping, both with a prestigious collection of blue ribbons in both the hunter and jumper rings at HITS Culpeper.

Chopping and Basje were first to challenge the jump-off, taking the course with precision and speed within the time allowed of 51 seconds. They flew through the timers fault-free in 44.454 to set the tone.

Moylan was next to test the jump-off course, knowing he would have to be quick and clear to edge Chopping’s well-executed round to second.

“Pernod has been doing the Grand Prix for over a year. He’s a bigger horse but is very fast for his size,” said Moylan. “He finished sixth in Friday’s [Brook Ledge] Grand Prix and he’s been knocking on the door all summer long to win one.”

They zipped through the course, conquering each fence. Moylan’s trusted mount handled the difficult line well, crossing the timers in a cool, clear 44.193, just enough to pick up the winner’s share of the prize purse.

“This horse has a great heart and is a happy, kind horse every day,” said Moylan of his winning mount, Pernod. “I am really glad for him that he was able to win.”

Many contenders were just a rail shy of advancing to the jump-off. Third-place finisher Maryann Charles, also of Southern Pines, and FVF Sailor Man, owned by Fox View Farm, finished with the quickest four-fault score in the first round, adding another top-five finish to their resume after placing third in Friday’s$25,000 Brook Ledge Grand Prix.

Fourth-place went to Matthias Hollberg, winner of Friday’s $25,000 Brook Ledge Grand Prix aboard another mount, and Aletta, owned by Olympic Dreams, LLC. Hollberg, of Middleburg, Virginia, was thwarted by the difficult triple combination in the home stretch, earning a four-fault score as they crossed the finish.

The top five rounded out with Kevin McCarthy of North Salem, New York, and Analyze This, owned by Kimberly Jakubowski. The difficult triple combination in the last line proved to be the dividing line for McCarthy as well, crossing the timers with one rail.