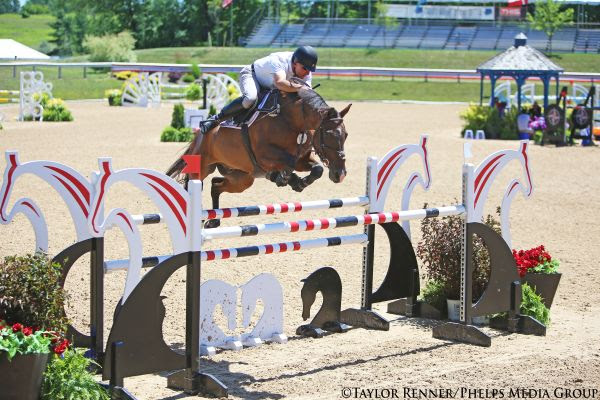 The world-class Flintfields Horse Park in Traverse City, Michigan, was once again filled with horses and riders on Wednesday as Week Two of the Great Lakes Equestrian Festival (GLEF) got underway. The Grand Prix Ring hosted jumper classes ranging in height from 1.15m to the 1.40m Jumpers. Aaron Vale and Carlo rode to the top of the standings, outpacing 24 other horse and rider combinations, to win the 1.40m Jumpers in the day’s highlight jumper event.

“I won!” exclaimed Vale. “I rode one horse and he won the class. He’s been hitting his stride lately. He won a grand prix in Atlanta a few weeks ago and he’s been winning a few welcomes and things like that. He’s starting to get the hang of it in the bigger classes, and he went in and did his job like he’s been doing it. It was nice to get a day one victory for our first week here. It was a good start on the right foot.”

Vale and Carlo, owned by Amatoville Enterprises, took on the Thomas Hern Jr.-designed course two rounds later as 16 in the order-of-go. They caught Jenning’s time by 8/10th’s of a second, knocking Jennings into second place and Killeen into third, in 35.198 seconds to grab the blue ribbon.

“I just started riding Carlo during this past winter circuit,” said Vale. “Today, I just galloped everywhere. I was really fast to fence one. I saw a long one from way back and just kept kicking. There was a bit of a gallop after one so I think that forward thinking helped. Since I was really fast getting to the forward distance to fence one, I think that gave me my momentum for the rest of the course. It certainly didn’t hurt. I just galloped up the whole way after that.”

Immediately following the 1.40m Jumpers was the 1.35 Jumpers, which saw 31 horses and riders go head to head for the top spot on the leaderboard. Lisa Jacquin and Rolls, owned by Doublethink LLC, came out on top with a double clear ride in 38.971 seconds.

Cara Cheska and Reid Patton’s Blizzerd held the first place spot for the majority of the class as fourth in the order-of-go, posting a faultless performance in 40.229 seconds. No one was able to beat Cheska’s time for 21 rounds until Jacquin tackled the course and shaved two seconds off of Cheska’s time to secure the win. Ashley Fleischhacker and Over Drive, owned by Ashland Show Stables LLC, rounded out the top three in a fault-free 40.832 seconds – just 6/10th’s of a second behind Cheska.

“Rolls is a great horse – very careful,” said Jacquin. “We didn’t show a lot this winter so he’s just getting started back into it. We showed him last week and I thought today he jumped great. It was a nice course for him – a little gallop-y. He’s just a good horse. He’s careful, fast and fun.

“Rolls is very fast across the ground,” continued Jacquin. “I think from the double to the end jump, a lot of people had to go out to come back to it, and I just happened to see it right on the lick so I was able to stay on the inside track and get right to it.

He was really good today.”

Day one of Week Two at GLEF concluded on Wednesday with the 1.30m Jumpers. Eleven riders out of 30 were able to produce double clear rounds with Lorcan Gallagher finishing the fastest aboard Enjoy Life, owned by JR Show Stables, LLC, in 58.112 seconds. Theo Genn followed Gallagher with Victoria Watters’ Posh to take second place in 62.193 seconds, while Melissa Donnelly and Air Guitar, owned by Captivate Farms LLC, finished in third in 63.020 seconds.

Vale has a busy week ahead at GLEF between both the hunter and jumper rings, but was thrilled to kick-off his three weeks competing in Traverse City with a win.

“The last time I came to Flintfields Horse Park was about three or four years ago,” said Vale. “I really enjoyed it. I love it here. We enjoyed the area last time – there’s a lot of fun stuff to do when you get done early and on off days. We’re looking to enjoy our time in the area and definitely at the show this year too.”

Jacquin, who is returning to GLEF after attending last year’s inaugural event, is enjoying her time competing at Flintfields Horse Park thus far as well and is looking forward to competing at GLEF through August during the new FEI series.

“I love it,” said Jacquin. “I think Morrissey Management Group has done a great job with the improvements they’ve done. I just think this is a great place. I love Traverse City and I love the horse show and everybody that runs this. It’s great!”

Feature jumper events for Week Two in the Grand Prix Ring include the High Junior/Amateur-Owner Jumpers and 1.40m Jumpers on Thursday, the $25,000 CWD Welcome Stake on Friday, the $7,500 NAL Low Junior/Amateur Jumper Classic on Saturday and the highlight event of the week on Sunday: the $50,000 Grand Prix of Michigan, presented by Peninsula Capital Management and Craig Rosenberg.

Shiels and her 7-year-old gelding, Cassius, received a fourth place ribbon after their first over fences round, finishing with a score of 84. The pair came back strong in the handy round, successfully navigating the tight rollbacks, bending lines and trot fence to earn another score of 84 to best the field of riders.

“I just was thinking about smooth turns and practicing all the inside turns,” Shiels said of her winning handy round. “This is his first time ever doing the Second Years. We practiced a little yesterday with the bigger height and decided to go ahead and put him in there and see what we’ve got. He’s super handy and starting to really figure it out. He was very good today!”

Shiels continued, “We’ve just been partnered since the end of Florida. We brought Cassius home from Florida this year. I think he’s going to be a fantastic hunter and derby horse!”

Also earning top ribbons in the Second Year Green Working Hunter division was Maria Rasmussen riding Memorable. Rasmussen earned a first place in the first over fences round with a score of 86. In the handy round, Rasmussen and Memorable finished with a fifth place.

In the First Year Green Working Hunter division, Tim Goguen and his mount Category earned top ribbons, receiving second places for both of his rounds in the first portion of the class. Goguen also rode Splendid, owned by Belhaven Farms, LLC, to a fourth and fifth place ribbon.
Geoffrey Hesslink rode another Belhaven Farms, LLC mount, Clever, to a first place win in the handy round with a score of 85. Hesslink and Clever also earned a fourth place in their first over fences round. Both Hesslink and Goguen will be in the running to earn champion during the second portion of the class to be held on Thursday.

Goguen continued proving his skills in the Green Conformation Hunter division aboard his two mounts, Splendid and Category. Goguen piloted Splendid to a first place in the first over fences round, and earned a third place in the handy round with a score of 84.5. With Category, Goguen finished in fourth in round one, and navigated his way around the tricky handy course to receive the blue with a score of 87.

Goguen and Category won the championship in the Green Conformation Hunter division during Week One of the Great Lakes Equestrian Festival, and will return to the ring on Thursday, July 14, to contend for the championship again.

“The horses are going well and jumping nice,” Goguen said. “I love it here; it’s a great time. It’s a nice horse show, nice town and there’s lots of things to do.”

With the first week of the Great Lakes Equestrian Festival over, riders are settling into their routine for Week Two and enjoying their time in Traverse City, Michigan.

Shiels said, “We came last year and we had a really great time. The new management has been super so we’re excited to be here for three weeks. The town is great and the horse show is great so we’re excited!”

Riders will return to the hunter ring on Thursday, July 14, to contend for their respective champion and reserve champion ribbons. Competition at the Great Lakes Equestrian Festival will begin at 8 a.m.

Week Two of the Great Lakes Equestrian Festival runs through July 17 at the Flintfields Horse Park and will continue to welcome riders and thrill spectators over the next three weeks throughout the first series of competition, which runs July 6-31.

Series Two kicks off on August 10 and runs through August 28featuring three weeks of hunter and jumper competition with a FEI CSI2* rating Week Five and Six and a FEI CSI3* rating during Week Seven culminating in the $100,000 Grand Traverse Grand Prix on Sunday, August 28.