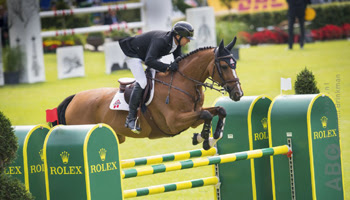 Eric Lamaze and his Rio Olympic mount, Fine Lady 5, scored their second win of the week in Aachen, Germany, taking victory in the €100,000 Prize of North Rhine-Westphalia on Friday, July 15. Photo by Arnd Bronkhorst Photography

Aachen, Germany – 2008 Olympic Show Jumping Champion Eric Lamaze of Schomberg, ON, won his second event of the week in Aachen, Germany, riding his Rio Olympic mount, Fine Lady 5.  The pair won the €62,700 Turkish Airlines Prize of Europe on Wednesday before topping the €100,000 Prize of North Rhine-Westphalia on Friday, July 15.

In Friday’s €100,000 Prize of North Rhine-Westphalia, a world-class starting field of 55 horses tackled the two-round competition over tracks set by German course designer Frank Rothenberger.  Following the opening round, the top 25 riders carried their faults forward to a second round where speed became the name of the game.  With a time of 58.13 seconds, Lamaze annihilated the competition, clocking in more than three full seconds faster than runner-up Maurice Tebbel of Germany who crossed the timers in 61.70 seconds riding Chacco’s Son.  Four-time Olympic gold medalist Ludger Beerbaum of Germany took third with a time of 63.55 seconds riding Chiara 222.

It was Lamaze’s first win in the €100,000 Prize of North Rhine-Westphalia.  In 2010, he placed second riding Hickstead, the same year the pair captured the Rolex Grand Prix of Aachen.

With two wins in one week in Aachen, widely considered to be the most competitive show jumping venue in the world, Fine Lady 5 is proving worthy of Lamaze’s belief in her as his Olympic mount.

“Talk about the best way to go into Rio!” exclaimed Lamaze, who arrived in Aachen following four weeks of competition at Spruce Meadows in Calgary, AB.  “Not only what she did in Calgary, but what she did in Aachen proves to me that she was the right choice for Rio.  Today was a big 1.55m with two rounds over two different courses and Fine Lady was unbelievable!  She seems to be peaking at the right time, and is proving to be quite an incredible horse.”

Lamaze will head to Rio alongside Yann Candele of Caledon, ON, Tiffany Foster of North Vancouver, BC, and Amy Millar of Perth, ON.  Kara Chad of Calgary, AB, will be the traveling alternate.  While the COC was making the official announcement, Chad, Foster, Millar and Lamaze were contesting the €350,000 Mercedes-Benz Nations’ Cup team event in Aachen, Germany.

“It was great, a super team effort,” said Lamaze of the Nations’ Cup competition where Canada finished seventh.  “I was riding Chacco Kid, a horse that is greener than Fine Lady, and I was really proud of him in both rounds.  Kara made a few minor mistakes in the first round as a 20-year-old riding in Aachen in front of thousands of people, but she corrected herself and put in a great effort for us in the second round.  Amy had a great experience – her horse has proven that he is worthy of going to the Olympics with those two rounds – and Tiffany is in great form.  It was in Yann’s horse’s best interest to sit this one out so we didn’t have our full Olympic team, but we were very happy with our result.”

Speaking of his own performance in the Nations’ Cup with Chacco Kid, a ten-year-old Oldenburg gelding (Chacco Blue x Come On) owned by Chacco Kid Group, Lamaze said, “Chacco Kid was amazing; he was a superstar.  I think he’s going to do some incredible things.  To be in the Nations’ Cup in Aachen when we only purchased him in January is incredible.  I thought Rome, where he did his first Nations’ Cup, was a big step up, and then to come to Aachen and do the Nations’ Cup here with scores of zero and four proves to me that he is the horse I think he is.”

Lamaze had three mounts in contention for the 2016 Rio Olympic Games.  His 2015 Pan American Games team gold medal partner, Coco Bongo, was in the running, as was Check Picobello Z.  Ultimately, Lamaze felt that Fine Lady 5 was his best choice.

“In a year when you are well-mounted and everything is coming together, you can protect your top horse and still continue to do the big classes,” explained Lamaze, who won individual gold and team silver medals at the 2008 Beijing Olympic Games.  “Chacco Kid could do the Nations’ Cup in Aachen, and Check Picobello was third in the grand prix in Spruce Meadows last week.  We have other horses that can fill Fine Lady’s shoes; they can back her up and protect her.

“Andy and Carlene Ziegler have put a great string of horses under me, as well as under Tiffany, and it makes all the difference in an Olympic year,” continued Lamaze.  “I went into the Olympics in London thinking I had no chance; I was on a very inexperienced horse.  For this Olympics, I feel like I am well-mounted and have a chance.”

While Fine Lady 5 will now rest before Rio, Lamaze will continue to compete at CSI4* La Coruna, Spain, from July 29-31followed by a stop on the Global Champions Tour at CSI5* Valkenswaard in The Netherlands from August 4-7.

Tiffany Foster (CAN) and Brighton Soar to their Second Victory of...