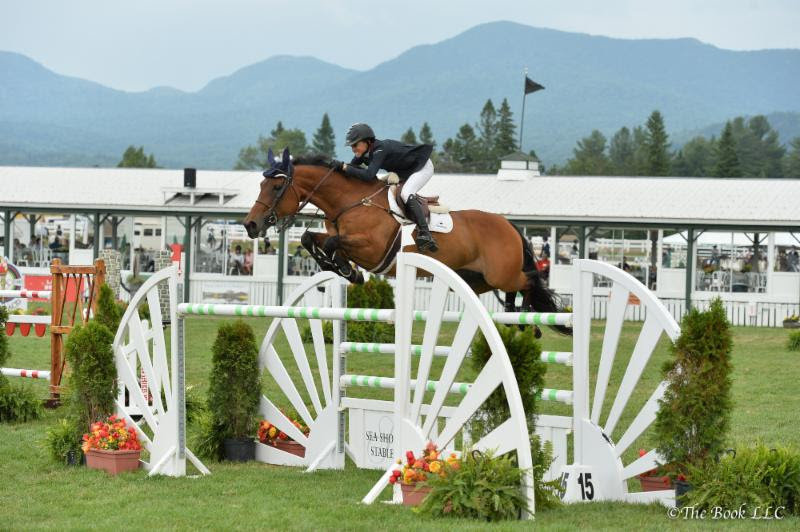 Foremost among the ISH performances was a win by Paul O’Shea of Ireland on NLF Newsflash in the $100,000 Equine Insurance Services/Great American Grand Prix, the culminating event of show jumping’s two-week stay in the Adirondack Mountains. Only four of 29 entries reached the jump-off by riding without penalty over the 15-jump course designed by Show Jumping Hall of Famer Steve Stephens. O’Shea claimed the win on his Irish Sport Horse when he completed the eight-jump tiebreaker course with the best score of four faults in a time of 38.187 seconds. “Flash is a great Irish horse. He has a fantastic mind and he can adapt to anything,” commented O’Shea following his win. “He is very easy to ride and nothing ever seems to bother him.”

Throughout the two weeks of competition Laura Chapot had great success with her Irish-bred horses ISHD Dual Star, Thornhill Kate and Out of Ireland. Aboard ISHD Dual Star, Chapot placed 2nd in the $5,000 WPTZ News Channel 5 1.40-meter Jumper Class on Wednesday of the first week and she completed the week with a 3rd place finish in the $75,000 Devoucoux Grand Prix. Chapot and ISHD Dual Star continued their victories during week two, taking 1st place in the $30,000 Open Jumper Classic by finishing the eight-jump tiebreaker course in a quick 37.019 seconds. Wrapping up the second week in the E.R. Mische Jumper Ring, the duo claimed 5th place in the $100,000 Equine Insurance Services/Great American Grand Prix. “We’re hoping for good things from her again this year,” noted Chapot prior to the pair’s victories. “She loves the field and she loves the atmosphere here.”

Out of Ireland proved ready for the big time throughout the two weeks, taking home 1st place in the $1,500 Dartbrook Rustic Goods 1.35-meter Jumper Class during week one and a 2nd  place finish in the $5,000 Hollow Brook Wealth Management 1.40m Jumper Class on Thursday of week two. In the $20,000 FarmVet 1.40-Meter Stake Class on Friday, Chapot and Out of Ireland claimed 1st place, topping a field of 38 horses. The Irish-bred mare finished the jump off with the fastest time of 37.440 seconds. “She has just stepped up to this level and she has taken to this big grass field they have here in Lake Placid really well,” Chapot said. “I think she proved today that she’s game to go and careful enough to win a class like this.”

About the Irish Horse GatewayIrish Olympic veteran Kevin Babington also did well in Lake Placid with his mount Mark Q. The Irish team placed 4th in the $30,000 Open Jumper Classic held during the second week of classes. Cormac Hanley also shared the success in Lake Placid, claiming 5th place in the $75,000 Devoucoux Grand Prix aboard the ISH Captain Caruso.

The Irish Horse Gateway’s mission is to connect buyers to sellers of Irish horses and ponies and promote the Irish horse and pony internationally to build upon its reputation worldwide.

For information on The Irish Horse Gateway please see www.irishhorsegateway.ie