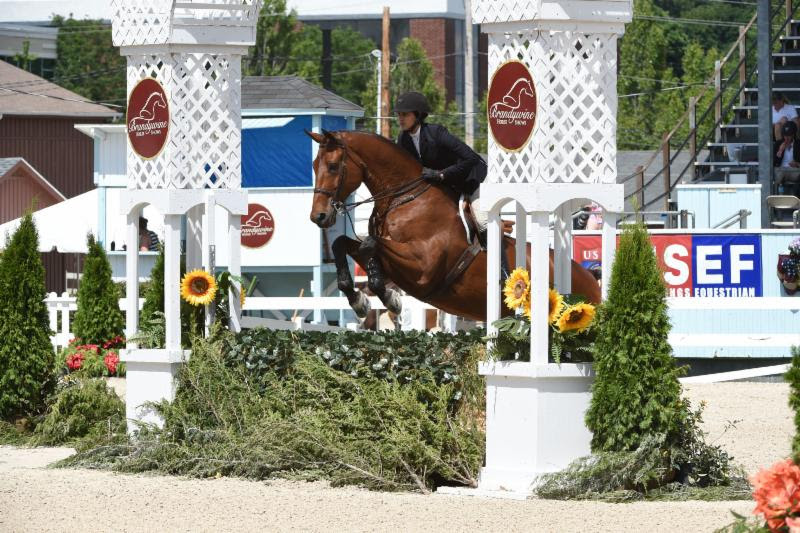 Lexington, KY—-   July 12, 2016 —-   Maya Nayyar, a 17-year-old from New York, NY, claimed title of Champion in the 2016 USHJA Hunterdon Cup Equitation Classic – East Coast, presented by Intermont Equestrian at Emory & Henry College, in the Dover Arena at the Devon horse show grounds. Her mount, Connaro, an 11-year-old Holsteiner bay gelding, owned by Maya Nayyar LLC, was also named the Best Equitation Horse of the Hunterdon Cup – East Coast.
Nayyar went 25th in Round I aboard her own Connaro and took the lead with a score of 89. She maintained her lead throughout the round, securing her position as the first place rider going into Round II, where the top 20 riders came back to compete for a coveted spot in the top 10.Nayyar executed Skip Bailey’s skillful courses, which were designed to be “challenging yet fair,” to best a field of 72 riders in three challenging rounds. Judge Frank Madden noted the courses were user-friendly without “a lot of trappy things and really sorted the riders out.”

Trailing by four points with an 85 after Round I, 15-year-old Emma Kurtz of Hudson, OH, also secured her place in the top 20 aboard Clearway, and returned for Round II. The 11-year-old bay Warmblood gelding (Cheenook x Lacrima), owned by Betsee Parker, was also the 2013 winning mount with Lillie Keenan, the 2015 winning mount with Victoria Colvin, and named Best Equitation Horse of the 2015 Hunterdon Cup.

At the end of Round II, both Nayyar and Kurtz found themselves at the top of the list again with just five points between them. Nayyar garnered a score of 90, the only 90 of the day, and Kurtz followed closely behind with an 89. Rounding out the top four after Round II was 16-year-old Taylor St. Jacques, of Glen Allen, VA, aboard Heritage Farms’ 8-year-old bay KWPN Di Samorano (Samorano x Silvana’s Heartbreak) who scored an 87 in Round I and an 86 in Round II. In fourth was 15-year-old Grace Boston of Owing Mills, MD, aboard Donald Stewart’s 17-year-old chestnut gelding Fernway, scoring an 84.5 in Round I and an 88 in Round II.

After several minutes of conferring, Judges Ken Smith and Frank Madden decided to call back the top four riders from Rounds I and II for further testing. As the class specifications require, the riders swapped horses. Smith and Madden had Nayyar and Kurtz swap mounts, as well as St. Jacques and Boston swapping horses.

“At the end of the day we talked a little bit about testing four or six. The top four really shined going into that second round, so we just kept it to the four,” said Madden. “The interesting thing for us in the first round course was the line from fence two to three. Some kids were doing it in five strides and some were doing it in six and really became stride specific. Some did it beautifully in the six, and we didn’t penalize them at all and some did it beautifully in the five, and so it really became who knew their horse best.”

Madden continued, “Maya was very accurate and consistent, and each round she went out there taking a little bit of a shot to shine. In the final round we asked specifically for a long approach and Maya was the only one who did it. So really the truth be known none of the four really did the test. They all missed something. One missed the counter canter, one missed a distance, one missed the sitting trot and one missed the long approach. Maya had won the first two rounds and nobody did the test letter perfect.”

Kurtz was a little nervous at first about swapping horses but the quality of horses in the class made that prospect less concerning.

“We only had two minutes to flat, and we only got two jumps,” said Kurtz. “So, it was definitely a little nerve racking because you don’t know the horse at all, and you have to go in and jump these big scary jumps. But, the horses were all incredible so it wasn’t a big deal.”

Nayyar’s trainer Stacia Madden said, “I like this class because it is so hunter-oriented. I really read the specs before the class. And I said to the kids that this is to be judged on a hunter style of riding so let’s work on the hunter style, and we will get a chance to do the handy when we get into Round II…I really liked the focus of that, and getting into the final round you know they will have to switch horses, and you are not able to help the kids at that point, so I really love that as a test too to see how the kids think on their own.

“As an equitation rider [Maya]’s got to be able to know that she’s really in a position to get into these tests and navigate the pressure, and she’s got to feel very confident and capable. And, I think today that was a really good check mark for her.”

The top 10 riders were pinned in reverse order with the top four remaining a surprise until the end. The judges kept the top four in the same positions they held coming into the third round with Boston in fourth, St. Jacques in third, Kurtz as reserve champion and Nayyar taking all three rounds to win the Championship title for 2016 Hunterdon Cup – East Coast.

USHJA congratulates all the competitors on a safe and successful event. Special thanks to the Brandywine Horse Show team: Louise Serio, executive director; Jennifer Burger, sponsorship and hospitality; and Geoff Teall and Skip Bailey, competition managers.

Emory & Henry College, located in the Highlands of Southwest Virginia, is home to Intermont Equestrian, a competitive riding program, and a premier four-year equine studies degree. It is the goal of both programs to prepare future horsemen and horsewomen for lives of leadership—–   in the equine industry or in other fields. The competitive program sponsors teams in the IDA, IHSA and ANRC. The equine studies curriculum offers a broad range of courses in teaching, horse show/stable management, anatomy, first aid and equine nutrition. For more information on Emory & Henry’s equine programs, visit www.ehc.edu/equine.