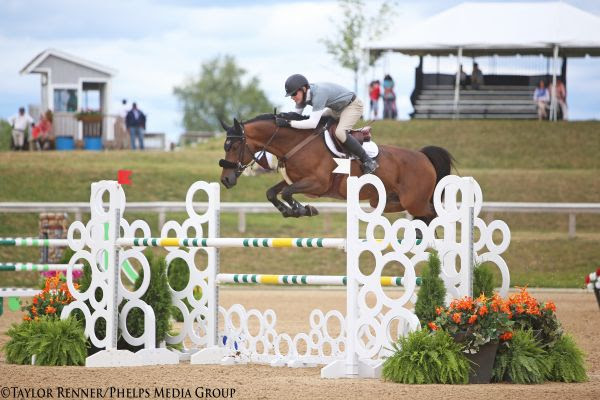 “That’s the first class he’s done, and he won!” said Lenkart. “This is my second year showing him – second summer. I’ve had a lot of good results on him, and a lot of top three ribbons.”

Eliza Lehrman and Five Way Farm LLC’s Isaac 22 set the pace as the first to go in the 1.40m Jumpers, finishing double clear in 47.956 seconds. Lenkart followed Lehrman eight rounds later with Fleur De Lis Farms’ 12-year-old Dutch Warmblood gelding and bested her time by an impressive three seconds to take the lead in 44.970 seconds. Lehrman and Lenkart were the only exhibitors out of 16 to navigate double clear rounds around both courses, designed by Thomas Hern Jr., as Lehrman also took third place honors with her second mount of the class, Fenom Van Klapscheut, also owned by Five Way Farm LLC, as last in the order-of-go.
“Last time I showed [Ziezo] was three weeks ago in Kentucky in June, and he jumped nice clear rounds and those classes were quite big,” said Lenkart. “Today was my first time in the ring here this year; I just got here. I wasn’t planning on going too fast. In the jump-off, I was pretty fast to the last jump. There were only two double clears. I thought it was pretty spread out and a long course for the jump-off, but it was nice. I plan to skip tomorrow with him and then do Sunday’s grand prix.”

“Last time I showed [Ziezo] was three weeks ago in Kentucky in June, and he jumped nice clear rounds and those classes were quite big,” said Lenkart. “Today was my first time in the ring here this year; I just got here. I wasn’t planning on going too fast. In the jump-off, I was pretty fast to the last jump. There were only two double clears. I thought it was pretty spread out and a long course for the jump-off, but it was nice. I plan to skip tomorrow with him and then do Sunday’s grand prix.”

Preceding the 1.40m Jumpers was the High Junior/Amateur-Owner Jumpers, which featured 27 horses and riders vying for the top spot on the leaderboard. Six were able to advance on to the jump-off after the first round, but it was Giavanna Rinaldi of Our Day Farm who piloted Pony Lane Farm’s Dulf Van Den Bisschop, also known as “Danny” in the barn, to the fastest fault-free finish in 38.777 seconds to grab the win.

“Danny is an awesome horse,” said Rinaldi. “We’re really clicking. I have him for this year and I’m going to show him in the classic this week also. He really feels on top of his game and ready to go.

“He was really good today,” continued Rinaldi. “He was a little bit on the wild side. I wasn’t expecting that, but he felt really good so I felt like I had a chance to go for it. I liked the jump-off course because I felt like it complimented both of us – it rode really smoothly and we could turn really well and go. He jumped his best and I’m really happy with it.”

Kaely Tomeu and Cornwall, owned by Siboney Ranch, were the early double clear pathfinders as fourth in the order-of-go, tripping the timers in 41.192 seconds. Rinaldi and the 13-year-old Belgian Warmblood stallion knocked Tomeu down to second when she outpaced Tomeu’s time five rounds later by three seconds. Tomeu was the only rider to come close to catching Rinaldi’s time with her second mount, Capitol, also owned by Siboney Ranch, but fell short by one second in 39.368 seconds, taking second and third place honors with both of her mounts as a result.

Rinaldi is no stranger to the winner’s circle in the jumper, hunter and equitation rings. Trained by Alex Jayne, the 17-year-old junior rider has adapted to successfully competing against all three disciplines at an early age.

“I’ve been really blessed with being able to ride so many different horses for different people and getting the opportunity to ride a variety of horses who all feel so completely different,” said Rinaldi. “It’s really taught me so much as a rider and it’s really progressed my riding so much. It’s a bit difficult to go from all of those divisions all the time, but I feel like it’s a lot of fun and I learn a lot from that. I ride some really great horses that teach me a lot.”

Lenkart and Rinaldi have both previously competed at Flintfields Horse Park, but always love returning to Traverse City, Michigan, and are already looking forward to next year’s GLEF event.

“I was here the very first year they ever had these shows,” said Lenkart. “I missed it for two years – I moved to Dallas about four years ago and started a business with Courtney Calcagnini. I’ve won in the grand prix ring at Flintfields Horse Park six times. I know Morrissey Management Group – I’ve been showing with them forever. They’re very good. Their shows are always run very well and this one is no different. I’ll be showing here for five weeks. I’ve got a week off to enjoy the weather, but I’m looking forward to being here.”

“I’m really glad we came back and I’d like to come again next year,” said Rinaldi.

Earlier in the day, David Beisel and Cumana were presented the first place award in the 1.35m Jumpers. Beisel and the 8-year-old Canadian Warmblood gelding, owned by Kara Cooke, finished double clear in a time of 58.588 seconds to claim the victory. Douglas Boyd and Calvigo, owned by Sapphire Riding Academy, finished two seconds behind Beisel in 60.001 seconds, garnering them second place honors. Cara Cheska and Reid Patton’s Blizzerd, who finished second inWednesday’s 1.35m Jumpers, rounded out the top three in Thursday’s competition, posting a fault-free round in 66.116 seconds.

Feature jumper events for Week Two in the Grand Prix Ring include the $25,000 CWD Welcome Stake on Friday, July 15, the $7,500 NAL Low Junior/Amateur Jumper Classic on Saturday, July 16, and the highlight event of the week on Sunday, July 17: the $50,000 Grand Prix of Michigan, presented by Peninsula Capital Management and Craig Rosenberg.

Sunny skies and high winds set the scene for the Main Hunter Ring during the second day of the Great Lakes Equestrian Festival Week Two. Seasoned competition mounts remained unfazed while winds gusted and tents flapped ringside. It was Tim Goguen aboard his impressive mounts that blew away the competition as he nabbed another championship win.

During Week One of the Great Lakes Equestrian Festival, Goguen and his newer mount, Category, owned by Garland Alban, made their way to the winner’s circle after earning champion in the Green Conformation Working Hunter division. Goguen and Category returned to Week Two just as strong, defending their title in the division and again finishing with the championship.

“Category has been pretty consistent,” Goguen commented. “He had a late start doing the Greens, but he’s gotten better and better as he’s come along.”

Goguen and Category had an impressive run in the division, earning three firsts, a third and a fourth to best the field of riders. Goguen’s winning streak did not stop with the championship, however. Goguen was also entered in the division aboard Splendid, a more seasoned mare that is owned by Belhaven Stables, LLC. Goguen and Splendid ended up receiving the reserve championship ribbon.

Goguen added, “Splendid has also been pretty consistent throughout the year. They both went really well. It’s really windy today, but they were good. The courses are great and this ring is a nice size to ride in!”

In the Second Year Green Conformation Working Hunter division, it was Maria Rasmussen and Memorable that earned the championship tri-color. Rasmussen and Memorable received a first place in the first over fences round and a fifth place in the handy round on the first day of the competition, and finished up the division strong after accumulating another first, second and fifth place.

“We call him Mo,” Rasmussen said of the horse. “He’s a winner; he’s a great horse. I’ve had him since he was a Pre-Green horse. The courses were good and he went really well today. He jumped really careful and tried hard.” As for the windy distractions, Rasmussen exclaimed, “He doesn’t mind any of that!”

“He’s very talented, a good mover, good jumper, but he can be a little bit green every now and then,” Weeden said of Oak Grove. “Today he actually was very consistent. The second round he really stepped up to the plate. I think it’s a little bit hard out there today with the wind, you feel like you’re riding against the wind, and he actually handled that really well.”

Competition at the Great Lakes Equestrian Festival will continue Friday, July 15, beginning at 8 a.m. This week is World Championship Hunter Rider week, and will feature the Glory Days Farm, LLC $2,500 USHJA National Hunter Derby that will take place on Sunday, July 17. Week Two of the Great Lakes Equestrian Festival runs through July 17 at the Flintfields Horse Park and will continue to welcome riders and thrill spectators over the next three weeks throughout the first series of competition, which runs July 6-31.

Series Two kicks off on August 10 and runs through August 28featuring three weeks of hunter and jumper competition with a FEI CSI2* rating Week Five and Six and a FEI CSI3* rating during Week Seven culminating in the $100,000 Grand Traverse Grand Prix on Sunday, August 28.