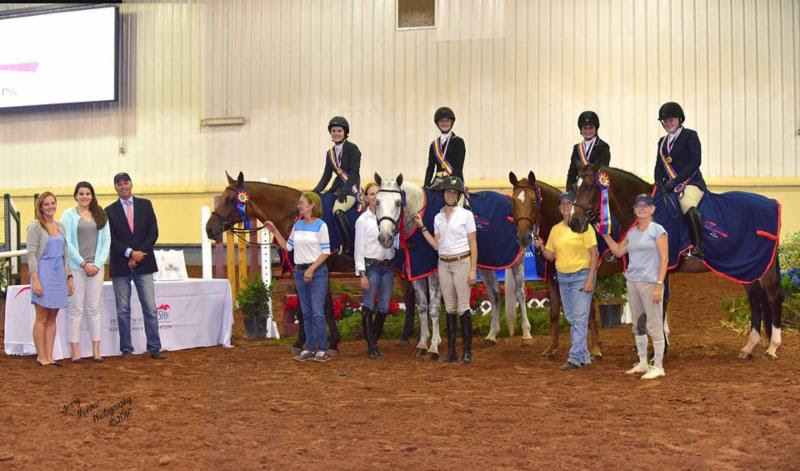 Oklahoma City, OK—-   July 15, 2016 —-   Excitement was in the air at the 2016 USHJA Children’s and Adult Amateur Hunter Central Regional Championships, presented by SmartPak, July 13-17 at the GO Show in Oklahoma City, OK, as riders from zones 6 and 7 participated in the first-of-its kind event.

The Championships kicked off on Wednesday with the Children’s Team Championships, which provided an opportunity for a friendly, but competitive face-off between the two teams from Zone 7.

“It was very friendly and very fun,” Zone 7 Chef d’Equipe Joey Brumbaugh said about the competition.

Zone 7 Team I earned the gold with a total score of 1481. Zone 7 Children’s Team II (Ainslee Gregg, Mia Gradick, Catherine Moorhead and Jessica Smith) received the silver medal with a total score of 1298.Zone 7 Children’s Team I (Logan Barowka, Tess Von Hemel, Sydney Murdoch and Cece Siegfried) took an early lead in the under saddle phase and continued to build the lead in the over fences phases with solid scores from the team including Tess Von Hemel on her horse Undeniable who scored in the 80s in both rounds.

“It played out very well,” Brumbaugh said about the Championship. “Everyone was very happy with the course. It was simple, but asked enough questions.”

Thursday, three teams competed for the Adult Amateur Team Championship with two Zone 7 teams and one team made up of Zone 6 and Zone 7 riders.

Zone 7 Team I secured the win in the third round with consistent performances by Mouney, Coretz and Chiaf to earn the gold medal.Zone 7 Team I started out with the lead in the under saddle phase with a strong performance by Amy Coretz aboard Don Ramiro, owned by Kim Coretz, but scores started to even up through the second round, according to Brumbaugh, with two Zone 7 Team II riders (O’Boyle and Hensley) receiving scores in the 80s.

“It went really well,” Brumbaugh said about the Adult Amateur Team Championship. “The courses were good, the horses jumped well…There were smiles all around.”

Mike Pegg designed the courses, which offered opportunities for riders and horses to demonstrate their handiness and jumping style through challenging yet appropriate courses.

“Everyone had a great time, and everyone thought the Championship was very special.” Brumbaugh said. “Everyone I spoke to was really excited about doing it again.”

In the Children’s Individual Championships 13-year-old Logan Barowka, on Miss Hollywood, owned by Randall Wegmann, earned the gold medal with a total score of 492, Tess Von Hemel and her horse Undeniable took home silver with a score of 478, and Mia Gradick on her horse Freixenet earned the bronze medal with their score of 443.

Barowka was tied for third after the under saddle phase and scored in the 80s in both the over fences classes to earn the Champion title.Logan Barowka earned gold, Tess Von Hemel earned silver, and Mia Gradick, earned bronze medalist at the 2016 USHJA Children’s Central Regional Championships. Photo Credit: Jeremy Mohme Photography

“I was super happy; I was shaking a little,” Barowka said about winning. “My mom was crying. I couldn’t wipe the smile off my face.”

Barowka was pleased with how Miss Hollywood performed, and said she worked hard preparing for the Championships with her trainer, Genie Harper.

“We worked at home a lot on bending lines and an in-and-out to prepare for what might be in the course,” she said. “My trainer did an amazing job preparing me. It was a great experience.”

Sydney Murdoch’s ride Everest, a Warmblood owned by Girling Farm LLC, was Best Turned Out, and Everest’s groom Victor with Summer Hill Farm received the Best Turned Out Award along with a bucket of Shapley’s products.

“When I heard them call my name I was really surprised,” Hensley said “But afterward I was really excited. This is a dream come true. I had my family there and my two trainers with me. That was great.”Hensley said she was pleased with her under saddle but was a little disappointed in her first over fences round. She came back strong to earn an 81 and an 84 in the second over fences round, and it put her in the top spot.

Kathy Chiaf’s horse Sweet Water was Best Turned Out, and the award went to her husband and groom, Joey Chiaf, along with a bucket of Shapley’s products.

“The sponsors were amazing,” Barowka said. “I had amazing awards.”

The Championships were judged by two panels of judges. During the competition, Panel 1 judges included Lynn Forgione and Kathleen Super, while Panel 2 judges were Claudia Roland and Patricia Jellerson.

For more information about the Children’s and Adult Amateur Hunter Regional Championships, and to see all Championship dates, visit  www.ushja.org/ChAAHunter.

Presenting sponsor of the Championships SmartPak Equine was founded by riders and horse owners for riders and horse owners in 1999 with the purpose of simplifying the administration of nutritional supplements to horses. Their patented SmartPak™ supplement feeding system has been adopted by thousands of barns and horse owners across the country, who value knowing that their supplements will be fed correctly. In addition to the SmartPak supplement system, they offer a broad line of horse health, show apparel, tack, and canine supplies sold online and through their catalogs. More information is available at www.smartpakequine.com.