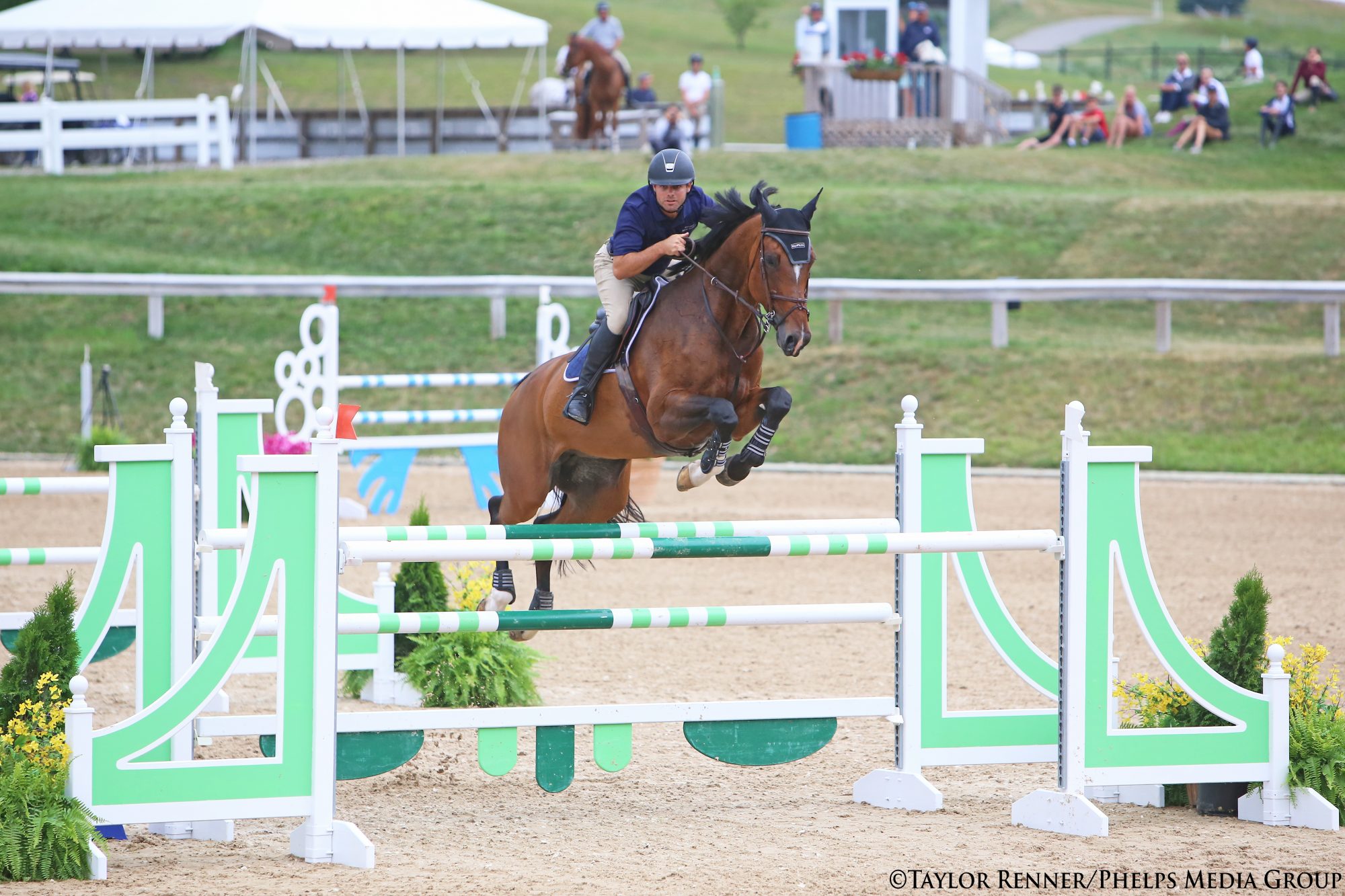 Traverse City, MI – July 6, 2016 – The Great Lakes Equestrian Festival kicked off its second year of competition this week with blue skies and mountain views. Competitors from around the country have gathered in Traverse City, Michigan to compete in the hunter, jumper, and equitation divisions offered at Flintfields Horse Park.

The first half of many of the hunter divisions kicked off in the R.L. Polk Family Main Hunter ring. Tim Goguen dominated the first portion of the Green Conformation Hunter division with his two mounts, Category and Splendid. Goguen rode Category, a newer, greener gelding, to both first place finishes, while he and Splendid, a more seasoned mount, earned both second place ribbons.

“Category is new, he showed in Kentucky a couple weeks, and he was reserve a couple weeks and now is here, so he’s a little greener than the rest of them,” explained Goguen. “The mare, Splendid, was great. She went really well in both the First Years and the Green Conformation. She’s shown through Florida, she’s got a little more mileage, but she’s done well.”

Goguen is based out of Wellington, Florida, and also has a farm in Lexington, Kentucky. The beautiful scenery, great weather, and top-notch management keep Gougen traveling all the way to Traverse City to compete each summer.

“It’s fantastic,” Gogeun said of the Great Lakes Equestrian Festival. “The Polk ring was named after one of my customers, Janet, and she’s got a lot of horses. It’s always fun to come back here; it’s a great area. The weather is great up here so far, it’s beautiful!”

Caroline Weeden took top honors in the first portion of the Regular Conformation Hunter riding Piper Benjamin’s Corvine. Benjamin is in college now, and Weeden thoroughly enjoyed the opportunity to compete her horse.

Of Corvine, Weeden said, “He is a great horse, I don’t get to ride him that often because he’s literally so perfect that he doesn’t need much training. He really steps up to the plate every time [Piper] rides. He’s so much fun to ride because I don’t get to do it that much, so it was fun!”

Weeden is based out of Chicago, Illinois, and has been making the trek to Traverse City for years to compete. “We’ve been coming since it first started when it was located on the other side of town,” she said. “The new management has done a fantastic job. We were here last year and I thought they did a great job and they’ve made improvements this year so it’s great, we love coming here!”

Other competitors that are in contention for the championship in the Regular Conformation Hunter include Maria Ramussen and Geoffrey Hesslink. Ramussen and her mount, Subject to Change, earned a first and third place, while Hesslink rode Clever to a second place and a third place.  The second half of the Regular Conformation Hunter division will also finish up on Thursday, July 7.

In the Green Working Hunter division, Caroline Weeden continued to dominate the competition, earning a first place on Poetry for the pair’s first trip. Maria Rasmussen took home the second place aboard Bliss. The first place in the Green Working Hunter handy round went to Greg Crolick and Encore CBF, with the second place going to Maria Rasmussen and Memorable.

The second week of the Great Lakes Equestrian Festival, held July 13-17, has completely sold out of stabling space, with limited spots remaining for week 3, July 20-24. Act now to reserve stabling spots for August, and don’t miss out on the chance to compete during the all-new August FEI addition.

THIS Monthly Standings — May