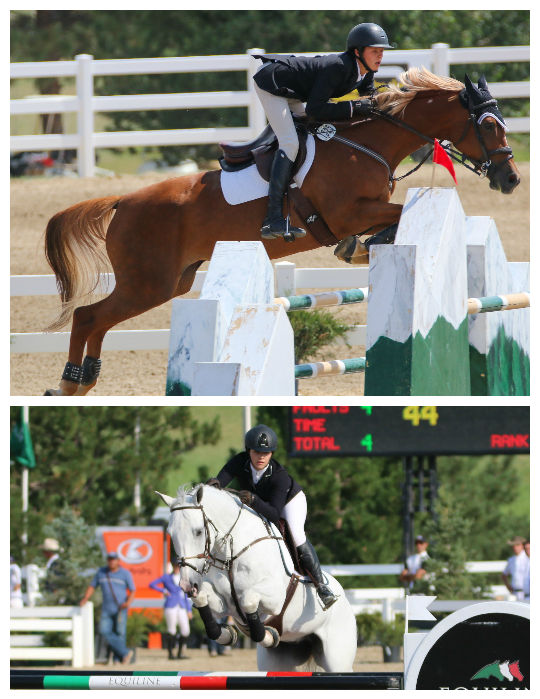 I sat down with three riders that will be competing at the North American Junior and Young Rider Championships (NAJYRC) taking place at the Colorado Horse Park in Parker, Colo.

Q: Tell me about yourself.

Q: Tell me about the horse you’re riding at NAJYRC.

DF: The horse that I’m riding is Taco [Taxco De La Nutria].I’ve had him since the beginning of Thermal. I started leasing him there, and he’s nine years old.

YADC: He’s lovely. His name is Coloredo 2, he’s 15, he’s from Germany, a Holsteiner. He was my brother’s horse. He won a Grand Prix in Argentina, and then he sent him to me, and now I ride him.

Q: Have you been to NAJYRC before?

BM: Yes, I went to young riders last year on my other horse, MTM Ace of Spades. It was a great learning experience. It didn’t turn out quite how I had hoped, but we had a clear round or two, and he was really good, I just really wasn’t on my A game, but this year I feel a lot more prepared.

DF: I’ve qualified for the past two years in the junior riders, this is the first year I’m able to do the young riders, but I’ve never went.

YADC: No, but I went to [the Nations Cup] in Wellington.

Q: How are you preparing for the championships? Does the altitude have an effect?

BM: Throughout the Ocala circuit I did the junior jumper classes and the bigger grand prixs just to over prepare myself so the jumps don’t seem as big or as difficult for when we got here. At this specific horse show, I will do the high juniors and the classics this week and next. I have not noticed much of a difference with the altitude in my horses. We took it pretty easy, trail rode a bit the first few days, and then did the highs. I haven’t noticed much a difference in our performance.

DF: Before I came to Colorado, I was in Park City, Utah, which is also high altitude. To get Taco fit for the altitude I did a lot of hill walking and hill trotting and long hacks to get him used to it. He’s definitely used to it by now. I did the Grand Prix and the Welcome last week [week V] and this week as well, just to get him around the ring, and then next week I will take a week off so that he has some time to rest before young riders start.

YADC: I’m doing the 1.45m, the high juniors. I think the altitude affects my horse, I have been here for two weeks for that. I am not affected by it, I’m perfect. [laughs]

Q: What are you looking forward to most at NAJYRC?

BM: I’m really looking forward to the social aspect as well as the competition because a lot of my friends that I don’t really get to see very often are coming and it’s also the top riders, really, in North America. Hopefully I leave with a medal, but if I don’t at least I know I’ll have a good time.

DF: Because I’ve pretty much only shown on the west coast, I haven’t shown against other people before. I guess, competing against a whole different group of people. I’m looking forward to the competition. The horse I have is very scopey and he’s great horse, so I think it’s a perfect time for me to go to young riders.

YADC: To win. To win the individual.

Good luck to these three young riders, and to all competitors!!