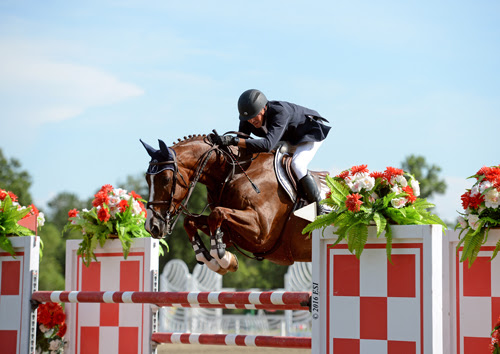 Culpeper, VA (July 17, 2016):  Riders and horses turn out for Friday’s $25,000 Brook Ledge Grand Prix as a weekend of excitement kicked off at the Cavalier Classic, the third week of HITS Culpeper.

Six advanced to the jump-off over the course set by, Bernardo Cabral of Lisbon, Portugal.. The jump-off course consisted of a tight opening line with a roll back to an oxer, followed by a slice to a vertical and a mid-course combination.

“The course was very well done, and I thought it wasn’t too challenging but suited all of the horses quite well,” said Chopping. “It was technical in some spots, and was just right for the field of horses competing.”

First to contend the shortened course was Manuel Torres riding out of Waterford, Virginia, and Christofolini H, owned by Andrea Torres Guerreiro. They started off strong, but after a couple ofrails early in the course, Torres opted to retire and save his mount for another day. They would finish the class with sixth-place. Torres would also capture the final spot of the top five with Cruising Altitude, owned by Santa Catalina Farm with a jump-off score of 41.110

Following Torres were the victors themselves, Chopping and Basje. They laid down a powerful, clear round in 34.897, where the lead would remain.

“I thought the first horse, Manuel’s horse, was going to be a big contender and really be the aggressive round to follow,” said Chopping of his jump-off plan. “After he wasn’t in the contingency, I didn’t want to leave the door open — I wanted to be clear and quick, but also be careful.”

Culpeper, Virginia’s own Brooke Kemper and Classified were next to challenge the jump-off. All was well as she chased down Chopping for the top spot, but an unfortunate rail at the fence preluding the combination, would keep them off the top of the leaderboard. They crossed the timers in 40.646 for the eventual fourth-place.

Maryann Charles, also of Southern Pines, and FVF Sailor man, owned by Fox View Farm, were next to advance. Charles and her mount had two third-place finishes at Culpeper Week II in both the Brook Ledge Grand Prix and Sunday’s $30,000 HITS Grand Prix. A rail at the first fence thwarted their chances of the win, but their speedy time of 35.872 sealed the yellow ribbon for their efforts.

Next to contend was Matthias Hollberg, winner of last week’s $25,000 Brook Ledge Grand Prix. In a twist, Chopping placed second to Hollberg in this class last week. The equestrian riding out of Middleburg, Virginia, and Aletta, owned by Olympic Dreams, LLC., put down a clear trip, but their time of 43.046 was not enough to edge out Chopping. They would ultimately capture the second-place spot.